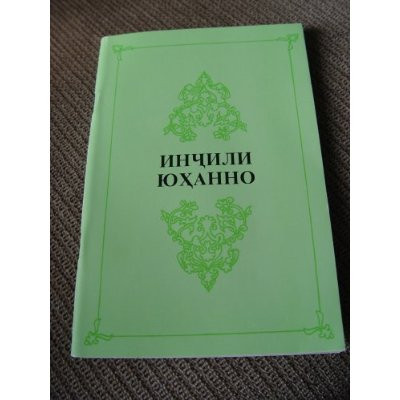 The Gospel of John in Tajik Language / Tajikistan / забо́ни тоҷикӣ́

The Gospel of John

In Tajik language!  Great for people from Tajikistan.

Tajik or Tajiki (Tajik: забо́ни тоҷикӣ́, zaboni toçikī, [zaˈbɔːni tɔːd͡ʒiˈki]), also called Tajiki Persian (Tajik: форси́и тоҷикӣ́, forsiji toçikī, [fɔːrˈsiji tɔːd͡ʒiˈki]), is the variety of Persian spoken in Tajikistan and Uzbekistan. It is closely related to Dari Persian. Since the beginning of the twentieth century and collapse of the Soviet Union, Tajik has been considered by a number of writers and researchers to be a variety of Persian (Halimov 1974: 30–31, Oafforov 1979: 33).[clarification needed]The popularity of this conception of Tajik as a variety of Persian was such that, during the period in which Tajik intellectuals were trying to establish Tajik as a language separate from Persian, Sadriddin Ayni, who was a prominent intellectual and educator, had to make a statement that Tajik was not a bastardized dialect of Persian. The issue of whether Tajik and Persian are to be considered two dialects of a single language or two discrete languages  has political sides to it (see Perry 1996). Today Tajik is recognized as a dialect of the Persian language.

Tajik is the official language of Tajikistan. In Afghanistan (where Tajik people make up a large part of the population), this language is less influenced by Turkic languages, is called Dari, and has co-official language status. Tajik has diverged from Persian as spoken in Afghanistan and Iran due to political borders, geographical isolation, the standardization process, and the influence of Russian and neighboring Turkic languages. The standard language is based on the northwestern dialects of Tajik (region of old major city of Samarqand), which have been somewhat influenced by the neighboring Uzbek language as a result of geographical proximity. Tajik also retains numerous archaic elements in its vocabulary, pronunciation, and grammar that have been lost elsewhere in the Persophone world, in part due to its relative isolation in the mountains of Central Asia.