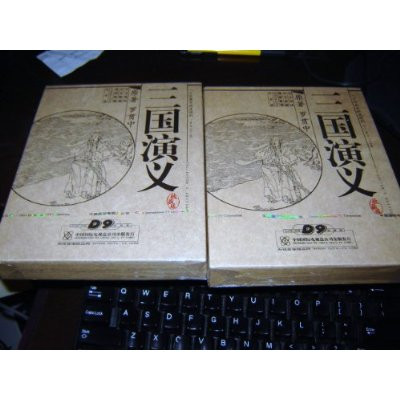 Romance of Three Kingdoms 84 Episodes (Chinese Audio / English and Chinese Subtitles) 14 dvds, 1994 DVD Region Code: 0 Romance of The Three Kingdoms is one of the greatest chinese classics and is compiled into a semi-fictional literary masterpiece during the Ming Dynasty by Luo Guanzhong. The novel comprises around 70+% fact and 20+% fiction. Some issues such as Guan Yu's weapon weighing around 40+ kilograms, the capabilties of Lu Bu, Liu Bei's horses as well as the existence of the Hill of the Fallen Phoenix and some others are probably fictional. That period in history can be said as the golden age of chivalry and although it happened more than 1700 years ago, characters such as Liu Bei, Cao Cao, Guan Yu, Zhang Fei and Zhuge Liang have become household names among the chinese. Tales of their exploits, courage, adventures and many more are told in the novel "Romance of The Three Kingdoms". Product details: Actors: Tang Guoqiang, Sun Yanjun, Bao Guoan, Li Jinfei Directors: Wang Fulin Format: DVD, Color, Subtitled Subtitles: English, Mandarin Chinese Region: all Studio: China International TV Production Company Weight: 828g 84 Episodes? 1. Swear Brothers 2. A Political Trumoil by the Eunuchs 3. Dong Zhuo Seizes the Capital 4. Cao Cao Presents a Sword 5. Three Heroes Fighting with Lu Bu ... About the original novel: Romance of the Three Kingdoms written by Luo Guanzhong in the 14th century, is a Chinese historical novel based upon events in the turbulent years near the end of the Han Dynasty and the Three Kingdoms era of China, starting in 169 and ending with the reunification of the land in 280. Three Kingdoms is acclaimed as one of the Four Great Classical Novels ofChinese literature; it has a total of 800,000 words and nearly a thousand dramatic characters (mostly historical) in 120 chapters. It is arguably the most widely read historical novel in late imperial and modern China.