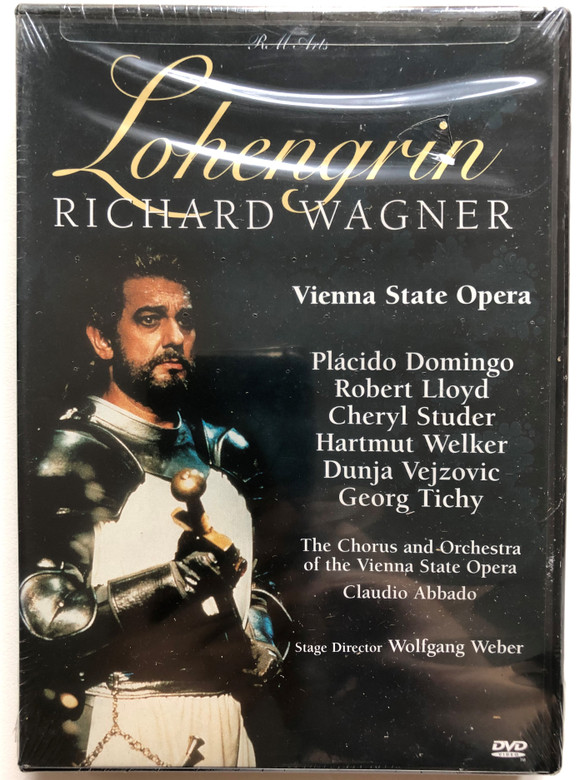 Richard Wagner's opera Lohengrin is interpreted by the Chorus and Orchestra of the Vienna State Opera, under the direction of Claudio Abbado. Cheryl Studer plays Elsa of Brabant, who is accused of murder by Frederick of Telramund (Hartmut Welker). Lohengrin (Placido Domingo) saves her and asks her to marry him. Meanwhile, Frederick and his wife, Ortrud (Dunja Vejzovic), plot against their union, leading up to the performance of the famous composition "Wedding March." Robert Lloyd also stars as King Henry.

Claudio Abbado, music director of the Vienna State Opera and recently appointed music director of the Berlin Philharmonic Orchestra, conducts Richard Wagner's three-act opera. An exquisitely lyrical piece, characterized by the composer's romantic vision of the individual's fight for freedom under an oppressive rule, "Lohengrin" has been described as Wagner's most Italianate opera. The title-role is therefore particularly suited to the dramatic and musical talents of Placido Domingo, whose recent adoption of Wagnerian roles has been received with justifiable praise. He leads an exceptional Wagnerian cast, including Robert Lloyd as King Henry and Dunja Vejzovic as Ortrud.

This 1990 production of Wagner's magnificent mid-period music drama at the Vienna State Opera is wholly triumphant, not least because of its now-antiquated notion of not updating, contemporizing, or otherwise making mincemeat of the opera's original setting. Conventional staging is not foolproof, but when it's done as well and as directly as stage director Wolfgang Weber and set designers Rudolf and Reinhard Heinrich have done here, then it is a welcome non-encumbrance to enjoying and appreciating this masterpiece.

Claudio Abbado conducts the Vienna State Opera Orchestra in a refined, relaxed performance that allows the singers to find themselves inside their larger-than-life characters, not unimportant for Wagner's epic operas. And what singers they are! Placido Domingo (as Lohengrin) and Cheryl Studer (as his beloved, Elsa) are both in their prime, singing and acting with extraordinary subtlety and emotion. Robert Lloyd, Hartmut Welker, and Dunja Vejzovic contribute first-rate support.

Spread out comfortably on two DVDs, this Lohengrin has no extra features, but needs none. With a clear, crisp 5.1 sound mix and well-transferred video images, this is a must-have for opera fans in general and Wagnerites in particular.