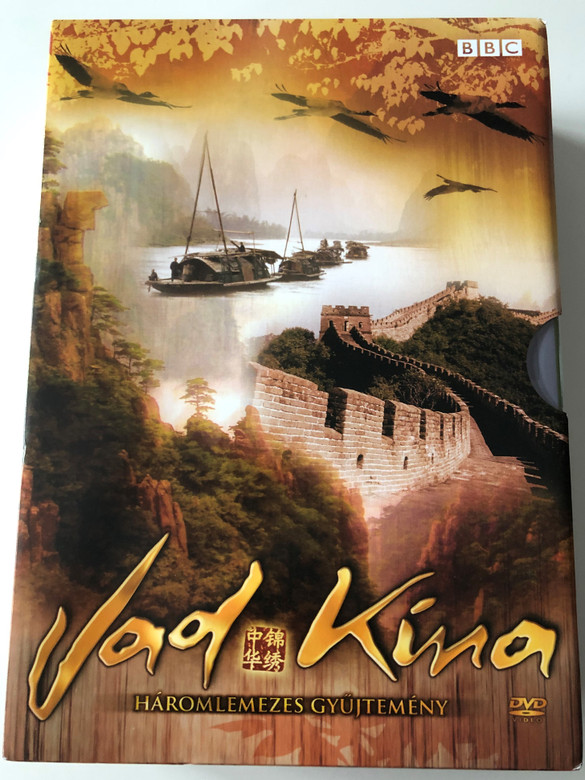 Wild China is a six-part nature documentary series on the natural history of China, co-produced by the BBC Natural History Unit and China Central Television (CCTV) and filmed in high-definition (HD). It was screened in the UK on BBC Two from 11 May to 5 June 2008. The English narration was provided by Bernard Hill and the series produced by Phil Chapman for the BBC and Gao Xiaoping for CCTV. The Chinese version was broadcast under the title Beautiful China. In Canada, it was broadcast on CBC as part of the series The Nature Of Things narrated by David Suzuki. Wild China was broadcast in Australia on ABC1 and ABC HD each Sunday at 7:30pm from 18 May 2008.

The musical score to accompany the series was composed by Barnaby Taylor and was performed by Cheng Yu and the UK Chinese Ensemble.

The series was billed as the culmination of the BBC Natural History Unit's "Continents" programmes, a long-running strand of blue-chip wildlife documentaries which surveyed the natural history of each of the world's major land areas. It was preceded by Wild Caribbean in 2007, but with the broadcast of South Pacific in 2009 the BBC signalled a continuation of the strand.

1"Heart of the Dragon"

The first programme in the series concentrates on South China, where the climate and terrain is ideal for rice cultivation. The terraced paddy fields of Yuanyang County plunge 2000 metres down steep hillsides to the Red River valley, and are some of the oldest man-made structures in China. In a Miao household in Guizhou province, the arrival of red-rumped swallows signals the time for planting. Other creatures which benefit from the rice monoculture include little egrets and Chinese pond herons. Of the hundreds of caves beneath the limestone hills of this karst region, few have been explored. At Zhongdong, an entire community, including a school, lives in the shelter of a cave. Francois' langurs, a rare primate, use their rock-climbing skills to enter caves at night for protection. Other cave dwellers include swifts and Rickett’s mouse eared bats, filmed for the first time catching fish in the dark. Freshwater creatures are an important resource for the people of South China. The Li River cormorant fishermen now only practice their art for tourists, but at Caohai Lake, dragonfly nymphs are a unique and valuable harvest. Some delicacies, such as freshwater turtles, are vanishingly rare. Chinese alligators only survive in Anhui province thanks to dedicated conservation efforts. A troop of Huangshan macaques is shown retreating to the safety of the treetops when a venomous Chinese moccasin is spotted. After the autumn rice harvest, migratory birds including tundra swans and Siberian cranes gather at Poyang Lake

This episode profiles the rich biodiversity of south-western Yunnan province. Forming the eastern boundary of the Himalaya, the Hengduan Mountains have buckled into a series of parallel ridges running north-south. The Nujiang River is one of a succession of deep gorges that carve their way through the mountains. In summer, monsoon rainclouds from the Indian Ocean are funnelled up the valleys, creating a unique climate in which species from the tropics can flourish at a more northerly latitude. Yunnan’s 18,000 plant species, of which 3,000 are found nowhere else, attracted Western botanists and explorers such as Joseph Rock. In the snowbound forests surrounding the pilgrimage site of Kawakarpo (6740 m), rare Yunnan snub-nosed monkeys are filmed feeding on lichen. In the Gaoligong Mountains, tropical and alpine plants grow side by side. Birdlife filmed here includes sunbirds feeding on epiphytes and the courtship display of a Temminck's tragopan. The fruiting trees attract bear macaques and black giant squirrels, whilst China’s 250 remaining wild Asian elephants forage below. A lesser bamboo bat colony is filmed at their roost inside a single stem; each bat is the size of a bumblebee. A giant elephant yam flower is pollinated by carrion beetles at night. Black crested gibbons are filmed in the forests of Wuliangshan. The people of Yunnan include the Dai, Hani and Jino tribes, each of whom regard the forests as sacred and harvest them sustainably, but modern times are bringing new threats such as rubber plantations and tourism.

The Tibetan Plateau is the subject of the third installment. It covers one quarter of China’s land area, but just 2.5 million people live there, the majority Tibetan Buddhists. Their religion mixes traditional Buddhism with older shamanic beliefs, and its teachings have instilled a respectful attitude to wildlife. Rare species such as black-necked cranes and Tibetan eared pheasants can benefit directly from co-existence with people. Meltwaters from Tibet’s 35,000 glaciers form large freshwater lakes including Qinghai and Manasarovar. Nesting birds here include great crested grebes and bar-headed geese. The plateau is a high altitude desert swept by freezing winds, but is also home to China’s biggest concentration of large animals. Argali sheep are seen descending hillsides to their winter grazing sites. In the Changtang, chiru are filmed congregating in the rutting season, and wild yaks are only found in the remotest areas. Predators include the elusive snow leopard and the Tibetan fox, filmed profiting from a Tibetan bear’s attempts to hunt pika. A highly lucrative "caterpillar fungus" (yatsa gunbu) is harvested from the spring ground for use as a traditional remedy. Life even clings on in the most extreme environments; the slopes of Everest are home to a species of jumping spider, whilst the unique hot spring snake survives at 4,500m by warming its body in thermal springs. The Saga Dawa festival takes place at sacred Mount Kailash and draws pilgrims of many faiths. Tibet is a fragile ecosystem; its glaciers are melting, and this will have a profound effect on the future for billions of people who depend on waters flowing from the plateau.[17]

4"Beyond the Great Wall"

The fourth episode looks at the lands north of China’s Great Wall. Here, nomadic tribes from a variety of ethnic groups still roam, but their traditional ways of life are changing as people move to modern cities. In ancient Manchuria, the last Hezhe fishermen still cast their nets beneath the thick ice of the frozen Black Dragon River. The forests here support wild boar, which forage for walnuts in winter, and the last remaining wild Siberian tigers in China. Ewenki reindeer herders came from Siberia hundreds of years ago: now, only 30 remain. Further west lie the rolling Mongolian steppe grasslands, and at Bayan Bulak, the livestock of Mongolian horsemen share the pastures and wetlands with breeding demoiselle cranes and whooper swans. Continuing westwards, the land becomes increasingly hot and dry, turning first to arid grasslands roamed by rare goitered gazelles, and then to the Taklamakan Desert, the world’s largest shifting sand desert. Here stand ruined towns, a legacy of the Silk Road, and many yardangs, sand-sculpted rock formations. Underground irrigation canals at the Turpan oasis enable grapes to be cultivated, and red-tailed gerbils are quick to take advantage. Kazakh nomads spend the summer in the Tian Shan before descending to the Junggar Basin, an arid land bordering the Gobi Desert, to overwinter. Here their livestock shares the meagre pasture with the last wild horses on earth. A Kazakh demonstrates the 6000-year-old tradition of hunting with golden eagles. The closing scenes show the Harbin Ice Festival.

5"Land of the Panda"

The fifth installment features central China, home to the Han Chinese. They are the largest ethnic group on Earth, and their language Mandarin the most widely spoken. The programme looks at how the relationship between people and wildlife has changed over time. Ancient Chinese beliefs placed great importance in the harmonious co-existence of man and nature. At the beginning of China’s period of rapid economic growth, this ideal was largely forgotten. A number of political references contrast the more enlightened environmental policies of the current government with those under Chairman Mao Zedong, which led to widespread degradation. The Chinese alligator and crested ibis are two species saved from extinction by direct intervention. Other animals have benefited from ancient spiritual beliefs and customs which live on, promoting respect and reverence for wildlife: the yellow weasels and Mandarin ducks of Beijing are two such creatures. However, wildlife is still threatened by illegal poaching for food and traditional medicine. West of Beijing lie the fertile lands of the North China Plain and the Loess plateau, source of the Yellow River. Increased demand for water has changed the river’s flow, and soil erosion causes dust storms which reach the capital. Further west, the Qinling Mountains are a refuge for some of China’s rarest species including the takin, golden snub-nosed monkey and giant panda. Giant panda courtship and mating is shown, filmed for the first time in the wild. In the colourful lakes of Jiuzhaigou, unique fish swim amongst forests preserved underwater.

The final programme features China’s 14,500 km coastline, home to 700 million people. Despite decades of rapid urban development, it is still an important migration route for birds. Endangered red-crowned cranes depart their northern breeding grounds to overwinter at Yancheng salt marsh, the largest coastal wetland in China. Shedao Island is an important stopover on the migration route, but the resident Shedao Island pitvipers, stranded by rising sea levels, lie in ambush in the branches. A snake strikes a songbird, and another is filmed swallowing a kingfisher. All along the coast, traditional forms of cultivation allow wildlife and people to live side by side. Crops vary from seaweed and cockles in the north to prawns further south, allowing birds such as whooper swans and black-faced spoonbills to prosper. Kejia tea-growers and Hui'an women harvesting oysters are also shown. China’s rivers and seas are heavily polluted. Sewage and fertiliser washed into the Bohai Gulf cause plankton blooms, attracting jellyfish, which in China are a commercial catch. In the Yangtze estuary, the migrations of creatures such as Yangtze sturgeon and mitten crabs are being impeded by upstream dams. In the tropical South China Sea, where coral reefs are under threat, whale sharks are rare visitors. Other rare creatures filmed include Pere David's deer and Chinese white dolphins. On Hainan island, macaques are shown jumping into a hotel swimming pool, epitomising the uneasy coexistence of wildlife and people in China, and the challenge of continuing its traditional harmonious relationship with nature. 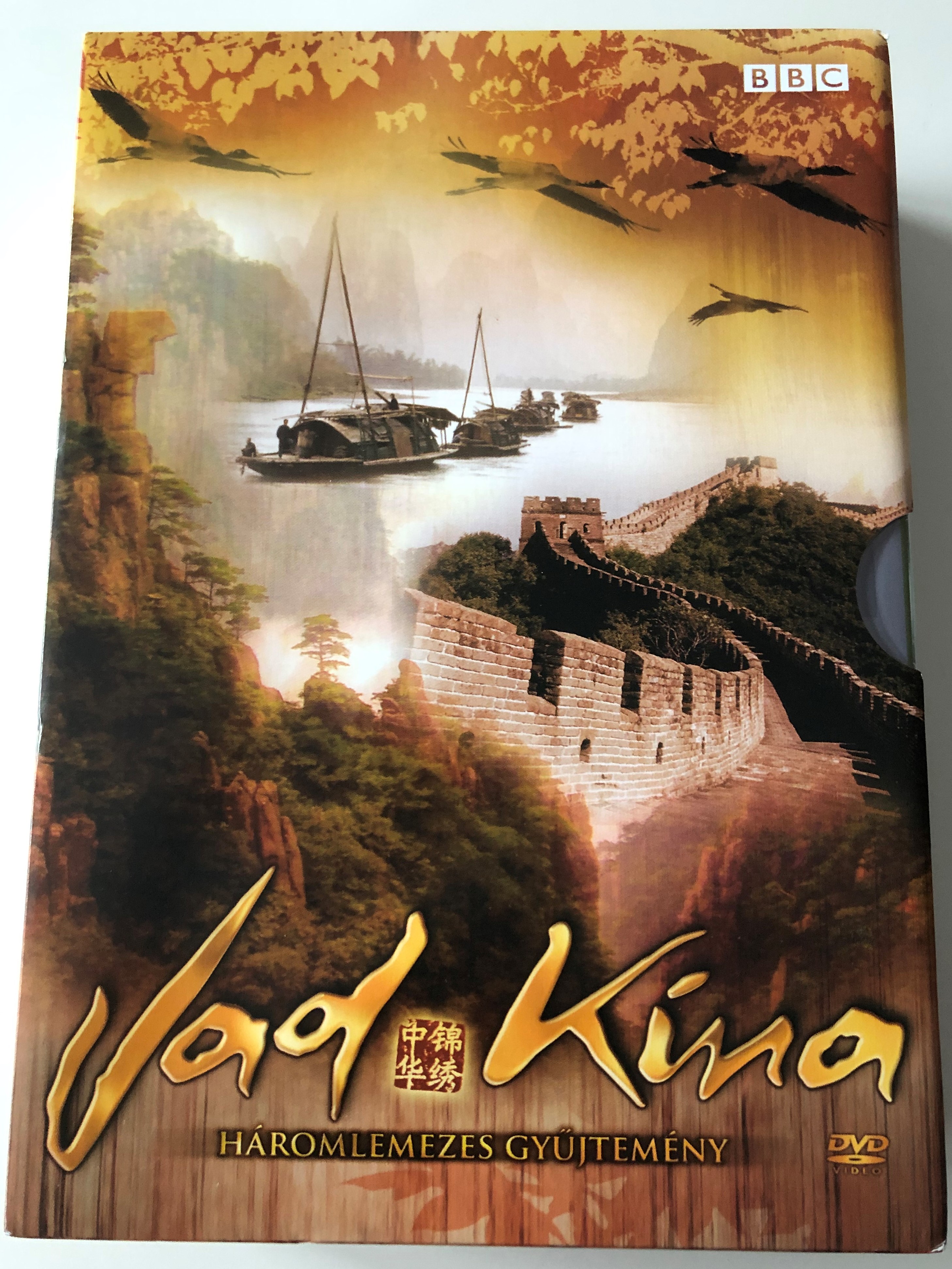 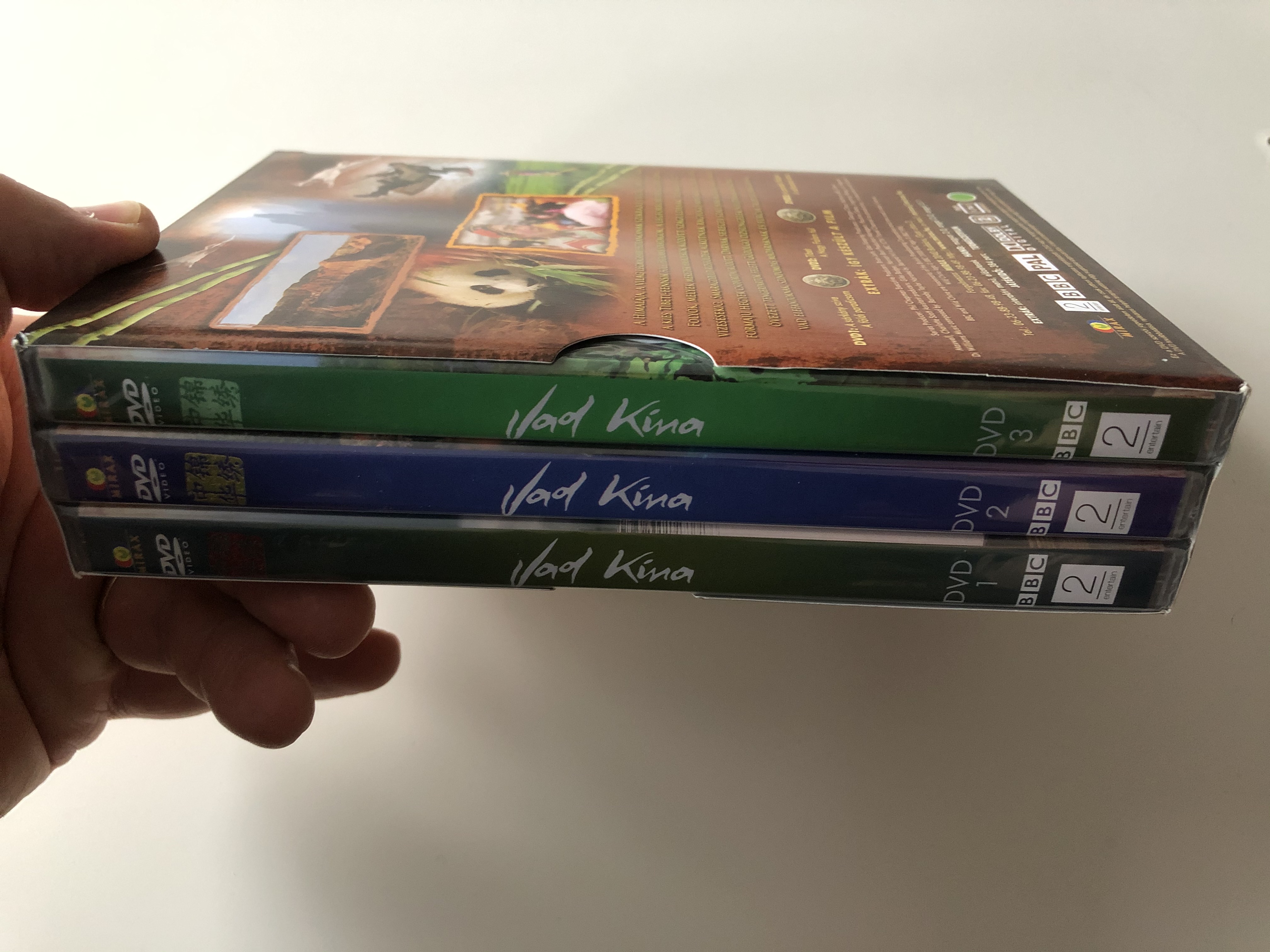 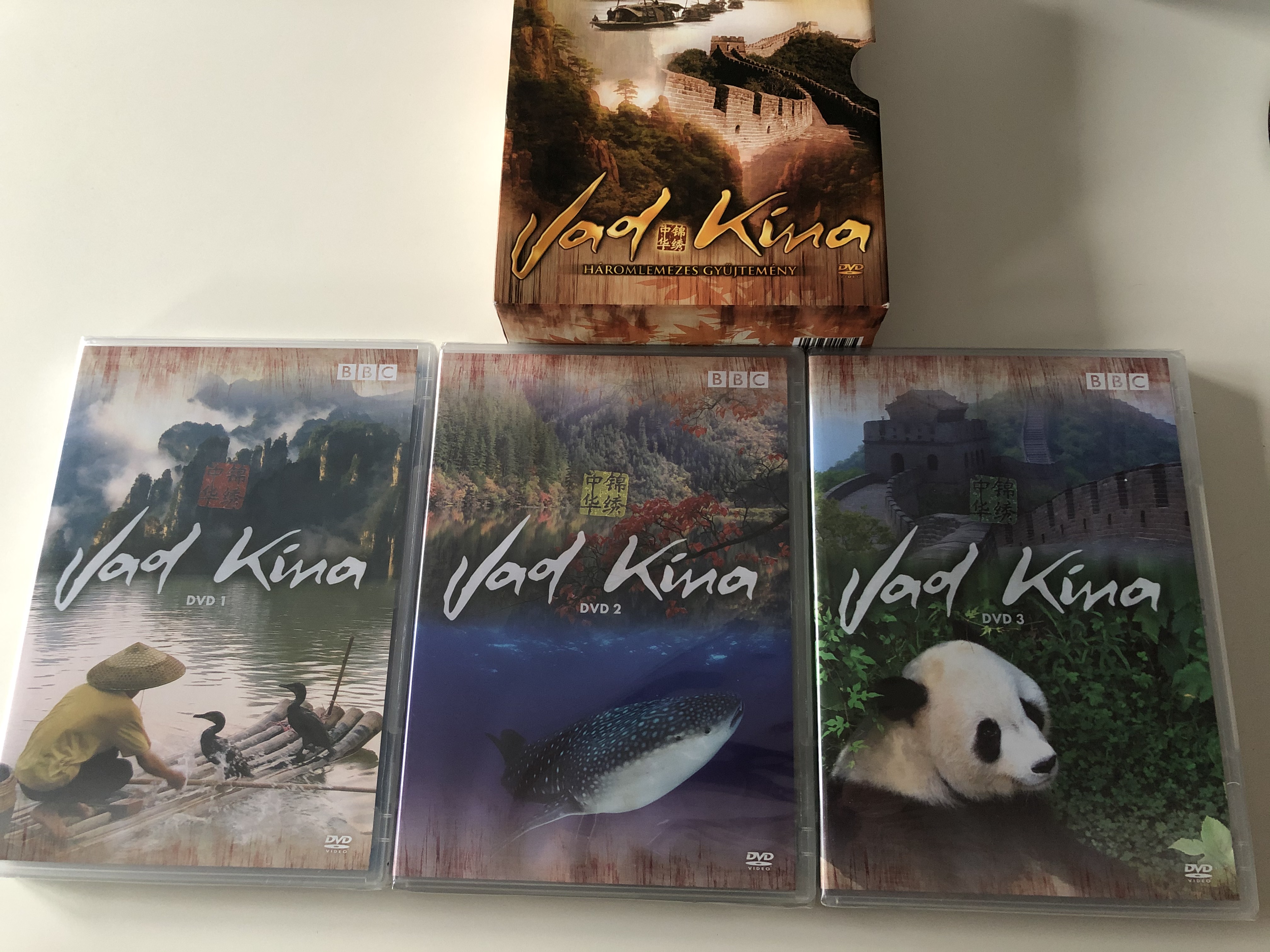 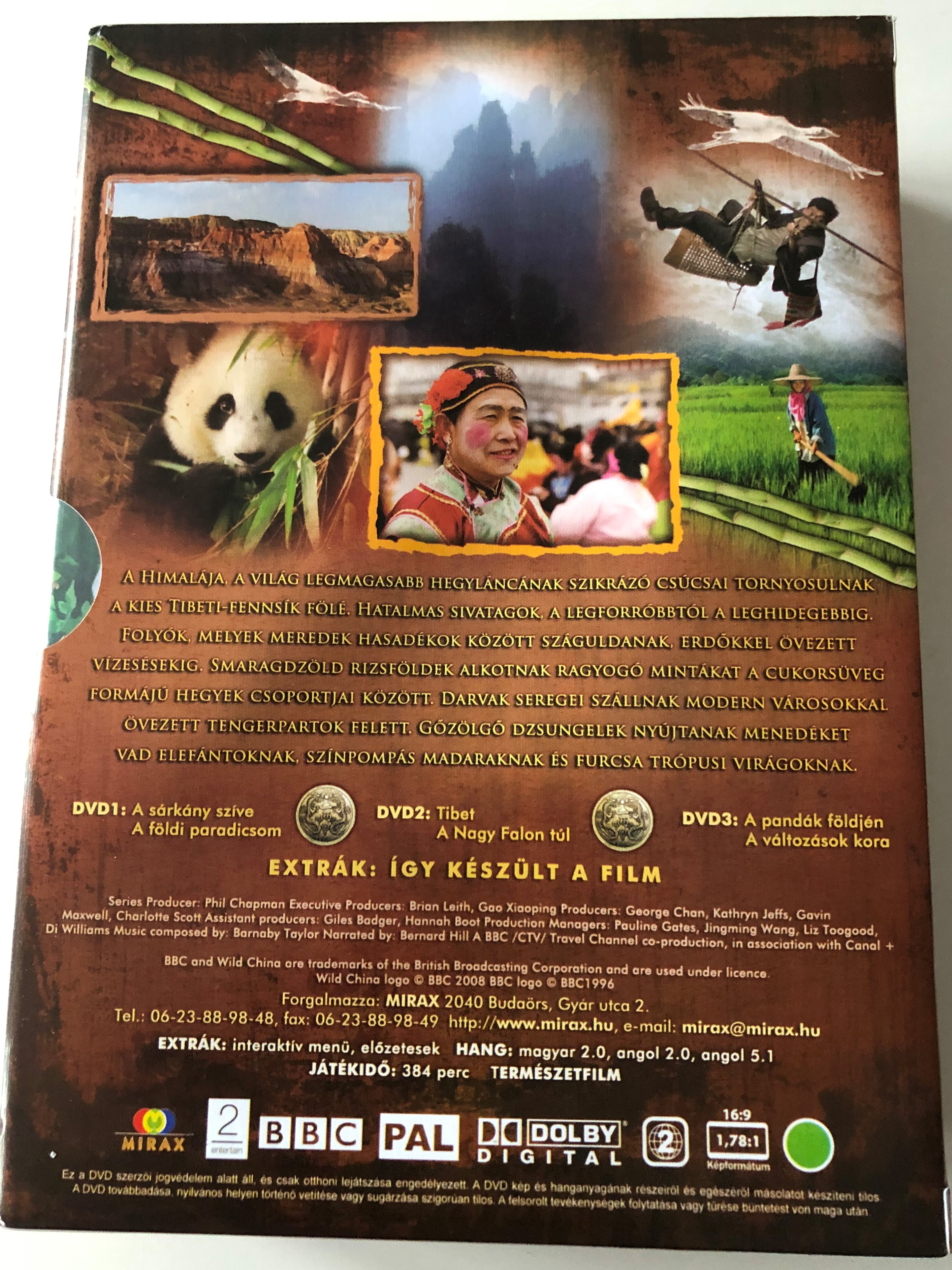