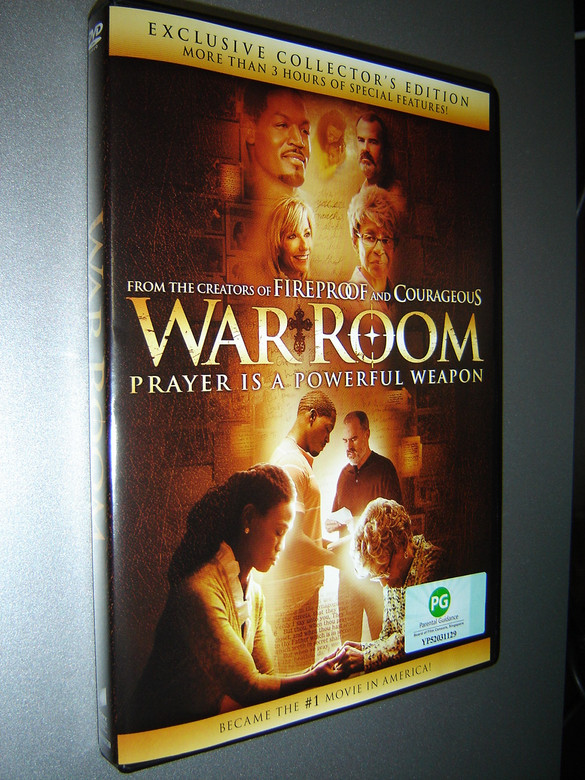 War Room / Exclusive Collector's Edition with more than 3 hours of special features!  From the creators of Fireproof and Courageous comes WAR ROOM PRAYER IS A POWERFUL WEAPON.  Became the #1 Movie in America!

SPECIAL FEATURES:  The Making of War Room / Bloopers and Outtakes / Deleted Scenes / War Room in 60 Seconds / The Heart of War Room / Commentary with the Kendricks / The Church On Its Knees / Investing in the Next Generation / The Art of Jumping Rope / From Auditing to Acting / Modern Day Miss Clara / Behind the Scenes: Color Grading / 'Warrior' Music Video by Steven Curtis Chapman / A Pastor's Call to Prayer // EXCLUSIVE BONUS FEATURES:  Wall of Remembrance / Stephen Kendrick Devotion / Alex Kendrick Devotion / Redemption for the Mitchell Home

Regarding the title of the film, director Kendrick says "We called it 'War Room' because, like the military, we should seek God for the right strategy before going into combat. By combat, I mean daily issues we face in our culture."

From the award-winning creators of Fireproof and Courageous comes War Room, a compelling drama with humor and heart that explores the power that prayer can have on marriages, parenting, careers, friendships, and every other area of our lives. Tony and Elizabeth Jordan have it all – great jobs, a beautiful daughter, and their dream house. But appearances can be deceiving. Tony and Elizabeth Jordan’s world is actually crumbling under the strain of a failing marriage. While Tony basks in his professional success and flirts with temptation, Elizabeth resigns herself to increasing bitterness. But their lives take an unexpected turn when Elizabeth meets her newest client, Miss Clara, and is challenged to establish a “war room” and a battle plan of prayer for her family. As Elizabeth tries to fight for her family, Tony’s hidden struggles come to light. Tony must decide if he will make amends to his family and prove Miss Clara’s wisdom that victories don’t come by accident.