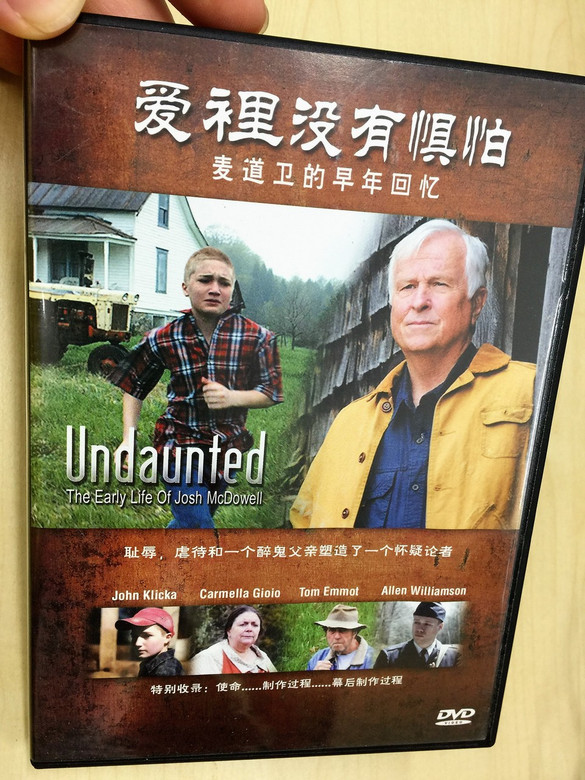 Undaunted / The Early Life of Josh McDowell / CHINESE ONLY DVD

The Early Life of Josh McDowell

A MOONLIT PICTURES FILM in Association with Josh McDowell Ministry

Josh McDowell was born into the harsh realities of a cruel world. His father’s violent alcoholism coupled with his own childhood molestation filled McDowell with shame. Over the years, that shame drove him further and further from Christ, until it finally turned to rage. Eager to rail against the existence of a loving God, McDowell sought out conflict with the Christians he encountered in college. He mocked their beliefs and scorned their faith until they issued him a challenge: prove God doesn’t exist. Obsessively, McDowell travelled the world scouring sacred historical texts for evidence contradicting Christianity. What he found instead was truth — and a faith that led to grace and redeemed a broken man. Undaunted is the true story of how Josh McDowell set out to prove Jesus Christ never existed — but ended up on a journey that brought him face to face with God’s love and transforming power. His ministry with Campus Crusade for Christ has allowed him to share the good news of his Savior to millions people around the world, and he’s published over 120 books in the field of Christian Apologetics, including More Than a Carpenter and Evidence That Demands a Verdict. He is living proof that a life can be transformed.

"Undaunted is a compelling and riveting story. This docu-drama is going to bring vision and hope to the most wounded generation in our nation's history." — Dr. Dennis Rainey, President and CEO, FamilyLife

"I was moved from beginning to end. This film will open up the dialogue and doors that will allow the gospel to get to the harder places of our lives that are buried in shame and guilt." — Marc V. Rutter, U.S. National Director, Cru

This award-winning DVD is a story of hope, forgiveness and abundant grace.This is Josh’s story — growing up in a dysfunctional family with an alcoholic and violent father, and a sexually abusive caregiver — that left him with a lifetime of scars, until God’s overwhelming love touched him and he came to face a life-changing Truth.

This DVD shines as a story of redemption! Josh McDowell graduated from Wheaton Bible College with honors. He has been in the ministry for over fifty years. He has written over 125 books including “More than a Carpenter”. Yet his beginnings would shock a lot of people.

In this DVD we see the biography of his life, that of a son of an alcoholic father and a mother so over-weight that when she went to his football games she had to sit outside in the car because she was too large for the wooden bleachers to hold her. He was molested as a boy by someone who lived in the house. He had to keep his father from killing his mother. Yet his father was a different man when not drinking. Josh could not wait to leave his home in Union City, Michigan, but soon was confronted by Christians in college. He was bitter but he took on their challenge to prove the resurrection didn’t happen. Instead the evidence he had was overwhelming but it was by reading about God’s love that his life was dramatically changed forever. He decided he needed to reconnect with his father, and by making a simple statement to his dad, “I love you”, his father’s life would change more dramatically in some ways than his very own.

We are pleased to award this movie our Dove “Family-Approved” Seal. Parents should consult the content listing below as it does contain a few sophisticated moments in it which are not appropriate for young children. The redemptive theme in this movie makes this one a sure-fire keeper!