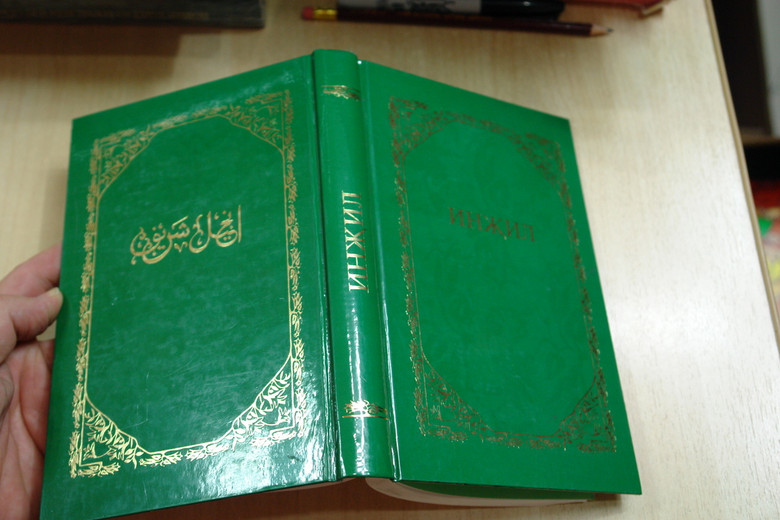 The Gospels and Acts in Dungan language / Dungan Injil Bible / The Dungan lan...

The Gospels and Acts in Dungan language

The Dungan language is a Sinitic language spoken by the Dungan of Central Asia, an ethnic group related to the Hui people of China

For the Dungan people of Kyrgyzstan and Kazakhstan

The Dungan language /ˈdʊŋɡɑːn/ is a Sinitic languagespoken primarily Kyrgyzstan and Kazakhstan by the Dungan people, an ethnic group related to the Hui people of China. Although it is derived from the Central Plains Mandarin of Gansu and Shaanxi, it is primarily written in Cyrillic and contains loanwords and archaisms not found in modern varieties of Mandarin.

History:  The Dungan people of Kyrgyzstan and Kazakhstan (with smaller groups living in other post-Soviet states) are the descendants of several groups of the Hui people that migrated to the region in the 1870s and the 1880s after the defeat of the Dungan revolt in Northwestern China. The Hui of Northwestern China (often referred to as "Dungans" or "Tungani" by the 19th-century western writers as well as by members of Turkic nationalities in China and Central Asia) would normally speak the same Mandarin dialect as the Han people in the same area (or in the area from which the particular Hui community had been resettled). At the same time, due to their unique history, their speech would be rich in Islamic or Islam-influenced terminology, based on loanwords from Arabic, Persian, and Turkic languages, as well as translations of them into Chinese. The Hui traders in the bazaars would be able to use Arabic or Persian numbers when talking between themselves, to keep their communications secret from Han bystanders. While not constituting a separate language, these words, phrases and turns of speech, known as Huihui hua (回回话, "Hui speech"), served as markers of group identity.As early 20th century travellers in Northwestern China would note, "the Mohammedan Chinese have to some extent a vocabulary, and always a style and manner of speech, all their own".

As the Dungans in the Russian Empire, and even more so in the Soviet Union, were isolated from China, their language experienced significant influence from the Russian and the Turkic languages of their neighbors.

In the Soviet Union, a written standard of the Dungan language was developed, based on a Gansu dialect, rather than the Beijing base of Standard Chinese. The language was used in the schools in Dungan villages. In the Soviet time there were several school textbooks published for studying the Dungan language, a three volume Russian–Dungan dictionary (14,000 words), the Dungan–Russian dictionary, linguistics monographs on the language and books in Dungan. The first Dungan-language newspaper was established in 1932; it continues publication today in weekly form.

When Dru C. Gladney, who had spent some years working with the Hui people in China, met with Dungans in Almaty in 1988, he described the experience as speaking "in a hybrid Gansu dialect that combined Turkish and Russian lexical items".