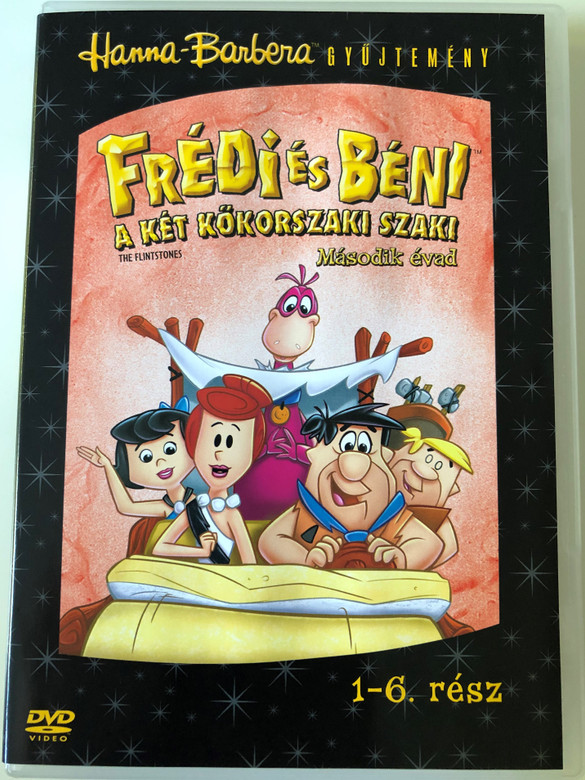 Episodes on this DVD:

1    "The Hit Song Writers"
Fred and Barney write a song with the help of a scammer who plagiarizes Hoagy Carmichael's "Stardust". When they unwittingly play this song for Hoagy and his agent, the agent throws them out of his office, but Hoagy forgives the two and after finding a poem Barney wrote. He later puts the poem to music and invites the Flintstones and Rubbles to a special dinner where the song is performed.
Notes: Special guest-star Hoagy Carmichael appears as himself and wrote the song "Yabba-Dabba-Dabba-Dabba-Doo" for this episode. Daws Butler voices Barney due to Mel Blanc's car accident.

2    "Droop-Along Flintstone"
The Flintstones and Rubbles take care of cousin Tumbleweed's ranch and come to enjoy being out west for a month. Later, they "bust a bronco," get lost, and accidentally stumble into a filming of a western TV show, but think they are in the middle of being "attacked" by "Indians" (stuntmen extras) Wilma and Betty-who also don't know that a show is being filmed – have to "save" their husbands.
Note: Daws Butler voices Barney due to Mel Blanc's car accident.

3    "The Missing Bus"
Quitting his 13 year quarry job because he's offered a new job at lower pay, Fred becomes a school bus driver for the route between Bedrock and Red Rock. First appearance of Mr. Slate as Mr. Granite.

5    "Fred Flintstone Woos Again"
Fred takes Wilma on a second honeymoon, only to find out that the judge who originally married them was unlicensed. Wilma tries to play hard-to-get because she is unhappy with the way Fred has been acting recently.
Note: Daws Butler voices Barney due to Mel Blanc's car accident.

6    "The Rock Quarry Story"
Rock Quarry, tired of Hollyrock, moves to Bedrock. Wilma and Betty know immediately that he is Rock Quarry, while Fred and Barney continue to believe that he is going by his alias, 'Gus Schultz.'
Note: Daws Butler voices Barney due to Mel Blanc's car accident.