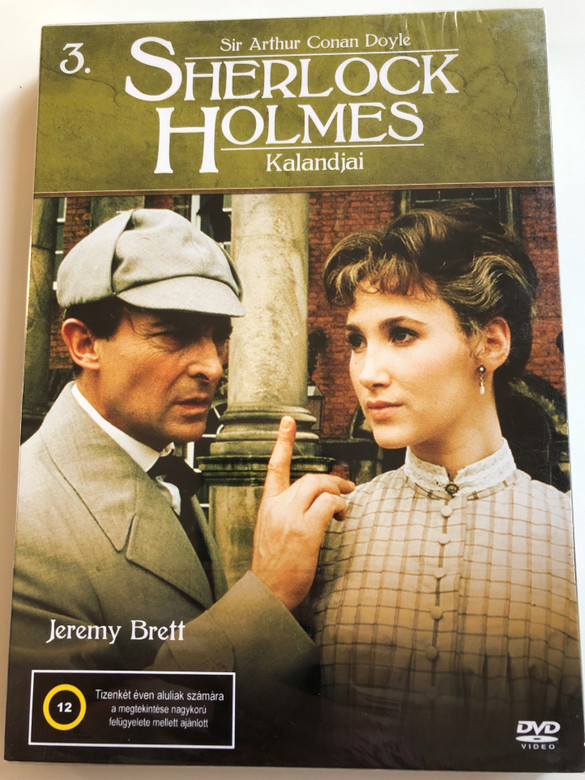 The first two series bear the title The Adventures Of Sherlock Holmes and subsequent series have the titles of the other short story collections by Sir Arthur Conan Doyle. It was first broadcast on the ITV network in the UK, and starred Jeremy Brett as Sherlock Holmes and David Burke as Dr John Watson. Burke appeared in the first Adventures series and then he was replaced by Edward Hardwicke, who played Watson for the remainder of the run.

The Crooked Man is the fifth episode of the first series of Sherlock Holmes, based on the eponymous short story.

Holmes calls on Dr Watson late one evening to tell him about a case that he has been working on, and also to invite him to be a witness to the final stage of the investigation. Colonel James Barclay, of The Royal Mallows based at Aldershot Camp, is dead, apparently by violence, and his wife Nancy is the prime suspect.

The Colonel’s brother officers are quite perplexed at the Colonel’s fate. Most of them have always believed that he and Nancy were a happy couple. They have observed over the years, however, that the Colonel seemed rather more attached to his wife than she to him. It also hasn’t escaped their notice that the Colonel sometimes had bouts of deep depression and moodiness for no apparent reason.

The Speckled Band is the sixth episode of the first series of Sherlock Holmes, based on the eponymous short story.

Sherlock Holmes wakes Dr. John Watson up early one morning, telling him that the housekeeper, Mrs. Hudson, roused him because a client has arrived, a young woman. Watson gets dressed, and they find their client waiting in Holmes' waiting room. She tells them that her name is Helen Stoner, and that she lives with her stepfather, Dr. Grimesby Roylott, the last survivor of the noble Roylott family of Stoke Moran. She explains that her mother met Roylott in India when she and her sister Julia were only two, but on their way back to England, her mother was killed in a railway accident. Despite this, they came to live in Stoke Moran. Holmes also learns that 250 pounds of the family money would go to each daughter once they married. Not to long later, though, Julia became engaged, after which she was killed in her very own room. The dying woman's words were: "The band! The speckled band!" Helen also tells them that Roylott let a gypsy camp stay nearby. After she leaves, Roylott himself appears and threatens Holmes to stay out of his business.