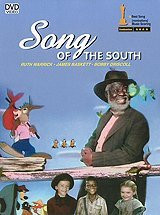 Audio and Subtitle options:   ENGLISH, Chinese
WE ARE FANS!  We purchased few of these for our family form Amazon UK for Christmas 2012!  WE have a few extra ones that we don't need.  Here is your chance to get one for your family.
This is where we purchased them from few years ago:  http://www.amazon.co.uk/South-Warrick-Bobby-Driscoll-Baskett/dp/7798945733
SONG OF THE SOUTH,which broke new ground in animation techniques,was one of the biggest box-office attractions in 1946.  Based on Jocl Chandler Harris's Uncle Remus,this animation-action film features about a little boy Johnny learning about life through the Brer Rabbit stories of Uncle Remus.SONG OF THE SOUTH's cartoon sequences are as fine as anything produced by the Disney animator's.The performance of James Basket (Uncle Remus/voice of Brer Fox) makes the technique work all the better, as he interacts ina genuine manner with the cartoon characters, for which he was awarded an honorary oscar.  The lively tune Zip-a-dee-doo-dah won the oscar for best song.  A long lasting genuine charmer in the history of films!

Song of the South is a 1946 American live-action/animated musical film produced by Walt Disney and released byRKO Radio Pictures. The film is based on the Uncle Remus stories by Joel Chandler Harris. The live actors provide a sentimental frame story, in which Uncle Remus relates the folk tales of the adventures of Br'er Rabbit and his friends. These anthropomorphic animal characters appear in animation. The hit song from the film was "Zip-a-Dee-Doo-Dah", which won the 1947 Academy Award for Best Song and is frequently used as part of Disney's montagethemes, has become widely used in popular culture. The film inspired the Disney theme park attraction Splash Mountain.

The film has never been released in its entirety on home video in the United States, because of the subject matter, which Disney executives thought might be viewed by some as politically incorrect and racist toward black people, and is therefore subject to much rumor. Some portions of the film have been issued on VHS and DVD as part of either compilations or special editions of Disney films.

Orchestral score, songs featured in the film include:

"Let the Rain Pour Down" is set to the melody of "Midnight Special", a traditional blues song popularized by Lead Belly. The song "Look at the Sun" has been marketed as one of the songs from the film, though it is not actually in the film.