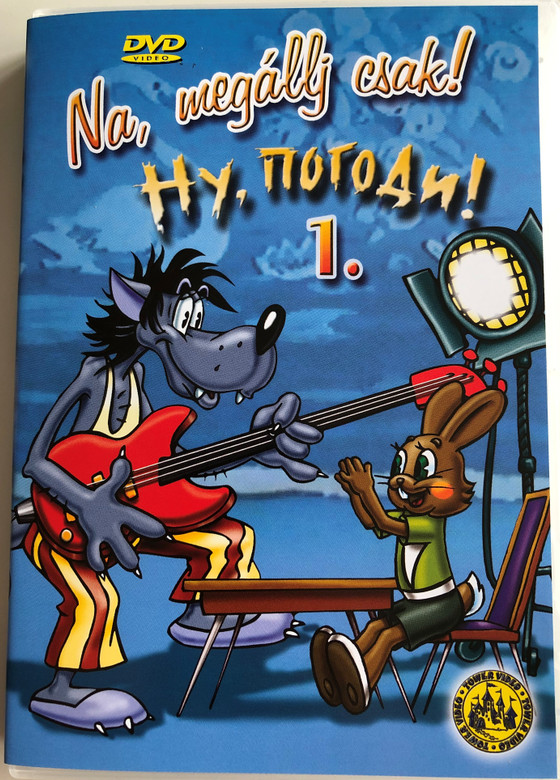 Well, Just You Wait!(Russian: Ну, погоди!, tr. Nu, pogodi!, IPA: [ˈnu pəɡɐˈdʲi]) is a Soviet, later Russian, animated series produced by Soyuzmultfilm. The series debuted in 1969 and became popular in the Soviet Union and Eastern Bloc countries. In the 2014 all-Russian poll Well, Just You Wait! won by a wide margin as people's favourite cartoon/animated series of all time.[2] The latest episode was produced in 2006.

The series follows the comical adventures of a mischievous yet artistic Wolf (Волк), trying to catch — and presumably eat Hare (Заяц). It features additional characters that usually either help the hare or interfere with the Wolf's plans. The original film language is Russian, but very little speech is used, usually interjections or at most several sentences per episode. The series' most common line is the titular "Nu, pogodi!", recited by the wolf when his plans fail. It also includes many grunts, laughs, and songs.

The Hare, commonly transliterated into English as Zayats (Russian: Заяц), is portrayed as a supposedly positive hero. He gets much less screen time and is less developed than the Wolf, and most of his actions are simply reactions to the Wolf's schemes. In later episodes, the role of the Hare becomes more active and developed, and he even manages to save the Wolf on several occasions. The Hare is portrayed as a percussionist in a number of episodes. The character was originally voiced by Klara Rumyanova.

The Hare is often mistaken as a female due to his appearance and voice, however he is actually a male. Also The Hare is almost always seen wearing the same green T-shirt and dark green shorts, unlike the Wolf's ever-varying wardrobe. There are rare exceptions, however: in the prologue of Episode 8, he appears in an ice-skating outfit, and later on in the same episode he is dressed with intentional absurdity as the grandfatherly Ded Moroz (Father Frost), the silliness of which is only heightened by the Wolf then appearing as his granddaughter, Snegurochka, aka the Snow Maiden.

The Wolf, commonly transliterated into English as Volk (Russian: Волк), is initially portrayed as a hooligan who eagerly turns to vandalism, abuses minors, breaks laws, and is a smoker. His appearance was inspired by a person the director Vyacheslav Kotyonochkin saw on the street, specifically a man with long hair, a protruding belly, and a thick cigarette between his lips.[3] The character was originally voiced by Anatoli Papanov.

His most common line throughout the series when things are not going as he expected is "Nu, pogodi!" At the end of an episode (and at the end of the pre-title introduction), the Wolf usually exclaims the series' titular phrase, "Nu, Zayats... Nu, pogodi!" which translates as "Well, Hare... Well, just you wait!".

In spite of his rough appearance, many of the Wolf's attempts to catch the Hare are often characterized by unexpected abilities on his part (including figure skating, ballet, gymnastics, and waltzing) for humorous contrast; he can also play the guitar very well and rides a powerful rocker motorbike. In the first episode, while climbing a high building to catch the Hare, the Wolf whistles the popular mountaineer song, "A Song About A Friend" (a signature song of Vladimir Vysotsky). In spite of these talents, most of the Wolf's schemes eventually fail or turn against him.

During the late Soviet and post-Soviet era, however, the Wolf gradually became more buffoonish than menacing. In the last episode (#20), for example, the Wolf is seen chewing a lollipop instead of smoking and his drawing style is reminiscent of new Russian cartoons (Russian: Новые русские мультфильмы) rather than the old Soviet slapstick genre. The Wolf became increasingly timid or even outright cowardly during this time period, contrasting sharply with his initially "macho" persona and actor's voice.

The Wolf's most characteristic piece of clothing is his bell-bottoms which can ambiguously be either part of naval uniform or the 1970s fashion. He is most often seen in a pink shirt with a yellow necktie, but occasionally (Episode 7) appears in a naval undershirt (telnyashka) and in Episode 8, he appears in drag, impersonating the Snegurochka. In Episode 11 he wears a jacket in the beginning, but soon removes it when chasing the Hare. Not infrequently, he loses most of his clothes during the chase, going on in his chintz underpants only (those are a realistic depiction of Soviet-style underwear), though in episode 6, he retains only his shirt and pulls it down to cover up his "naked" hindquarters. Humorously, all of his clothing below the waist has a special opening for his tail.

In Episodes 1-16 the Wolf's hairstyle is basically unchanged, though in Episode 14 his hair get briefly done in a style not unlike Elvis Presley's. In Episode 17 he wears a ponytail, and in Episode 18 his forelock is cropped and the mullet is tied into a ponytail. However, in the three final episodes he resumes his earlier hairstyle of episodes 1-16.

The Wolf climbs up the building where the Hare resides by a clothes-hanging rope. The Hare cuts the rope and the Wolf free-falls into the Police's vehicle. The Wolf goes to the beach and caught sight of the Hare playing water ski. The Wolf chases the Hare around and finally gets pulled away by a canoe.

2    "Fairground at Night"
The Wolf carries a guitar around and starts singing while the Hare passes by. He swallows the Hare's balloon and becomes afloat. The Wolf chases the Hare around the fairgound but fails to catch him at the last minute.

3    "All Ways to catch the hare"
The Hare goes cycling on a bright day. The Wolf intends to chase him with his badass motorbike. Everything quickly runs downhill.

4    "Sportsman Despite Will"    Vyacheslav Kotyonochkin    Felix Kandel,
The Wolf goes to a stadium, looking all chic and sporty. He engages in a bunch of sport activities but messes everything up.

5    "Some ideas of a Wolf"    Vyacheslav Kotyonochkin    Felix Kandel,
The Wolf spies on the Hare by a monocular and then bags him as he hops down the stairs. The Wolf hides the bag in a telephone booth. The Hare gets out and traps the Wolf instead. Later, the Wolf disguised himself as a watermelon and almost caught the Hare but Mr. Hippopotamus comes to the rescue. The Wolf gets his head stuck in a bus's door while chasing the Hare. They runs into a train station where the Wolf runs into Mr. Hippo again.