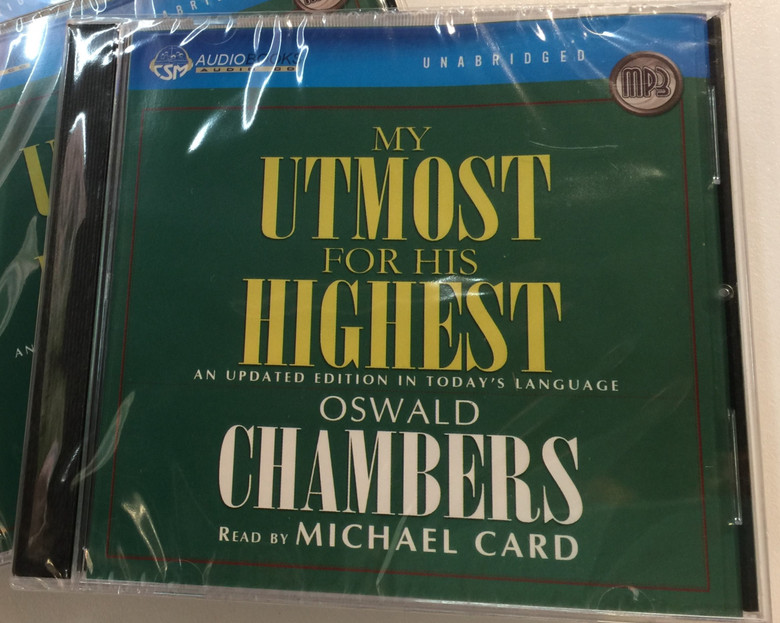 My Utmost for His Highest: An Updated Edition in Today's Language by Oswald Chambers / Unabridged - Audiobook MP3 Read by Michael Card

My Utmost for His Highest: An Updated Edition in Today's Language by Oswald Chambers / Unabridged - Audiobook MP3 Read by Michael Card

The best-selling devotional in the world is now available in audio! This revised and updated edition speaks to us in a clearer and more dynamic method than ever before. This brilliant Scotsman has influenced the lives of millions of Christians worldwide. His ability to take the weightiest of topics and apply them to everyday life is one of his greatest gifts.

The aim of Oswald Chambers was all-encompassing: "to shut out every other consideration and keep yourself before God for this one thing only--My Utmost for His Highest... determined to be absolutely and entirely for Him and for Him alone." Oswald Chambers was born in Scotland and spent much of his boyhood there. His ministry of teaching and preaching took him for a time to the United States and Japan.

The last six years of his life were spent as principal of the Bible Training College in London, and as a chaplain to British Commonwealth troops in Egypt during World War 1. After his death, the works which bear his name were compiled by his wife from her own verbatim shorthand notes of his talks.

Michael Card is an award-winning singer, songwriter, author and teacher. With over 20 albums to his credit, 19 #1 songs, and 14+ books, he is uniquely gifted and qualified to narrate My Utmost for His Highest. His nuanced and thoughtful reading of this timeless classic provide a magnificent opportunity for those regardless of their familiarity of Oswald Chambers.

Oswald Chambers was converted in his teen years by the ministry of Charles Spurgeon. Chambers studied art and archaeology before answering the call to Christian ministry. Author of the bestseller My Utmost for His Highest, Chambers has more than thirty other titles to his credit, all but one compiled by his wife, Gertrude.