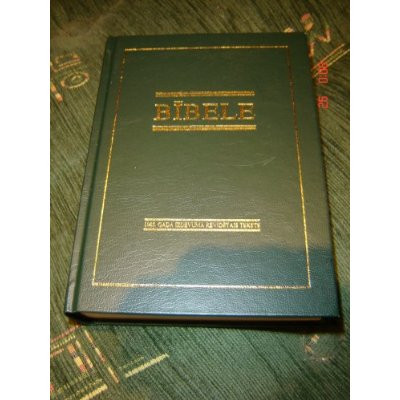 The Bible on the picture was printed in Finnland. Latvian (latvie?u valoda) is the official state language of Latvia. Alternative names include Lettish and Lettisch. There are about 1.5 million native Latvian speakers in Latvia and about 150,000 abroad. The Latvian language has a relatively large number of non-native speakers, atypical for a small language. Because of language policy in Latvia approximately 60% of the 900,000 ethnic-minority population of Latvia speak Latvian. The use of the Latvian language in various areas of the social life in Latvia is increasing. Latvian is a Baltic language and is most closely related to Lithuanian, although the two are not mutually intelligible, even in their written forms. Latvian first appeared in Western print in the mid-16th century with the reproduction of the Lord's Prayer in Latvian in Sebastian M?nster's Cosmographia Universalis, in Roman script. Latvian is one of two living Baltic languages (the other being Lithuanian), a group of its own within the Indo-European language family. The Latvian and Lithuanian languages have retained many features of the nominal morphology of the proto-language, though in matters of phonology and verbal morphology they show many innovations, with Latvian being considerably more innovative than Lithuanian.