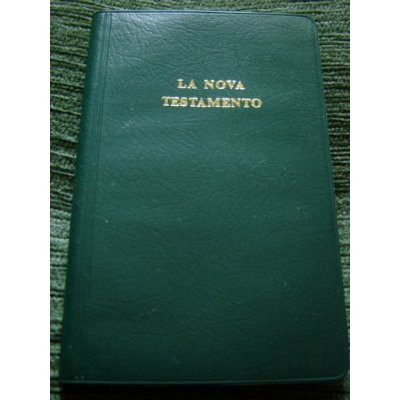 The initiator of Esperanto, L. L. Zamenhof, translated the entire Hebrew Bible into Esperanto. His translation has been much admired by Esperantists and is widely held up as a model or exemplar for other Esperanto authors and translators. Other translators have also edited and published Esperanto versions of the New Testament and Apocrypha.

A committee led by British clergy and scholars (J.C. Rust, B.J. Beveridge and C.G. Wilkinson) was formed to translate the New Testament and to review L. L. Zamenhof's translation of the Hebrew Bible for eventual publication by the British and Foreign Bible Society. The New Testament was completed in 1910 and published in 1912. The translation of the New Testament is influenced by the English King James Bible, so it closely follows the textus receptus rather than the more modern accepted text based on the most ancient Greek manuscripts.

From 1919 until 1926 the Bible committee read through and corrected the text, harmonizing the language of the New Testament to the Old (according to a Protestant Christian point of view), then typesetting and proofreading. Two Quakers, the sisters Priscilla Hannah Peckover (1833–1931) and Algerina Peckover (1841–1927) supported the project financially. A translation of the entire Christian canon as recognized by Protestants, often referred to in Esperanto as the Londona Biblio, was published in 1926. Within five years more than 5,000 copies of the Esperanto Bible had sold.