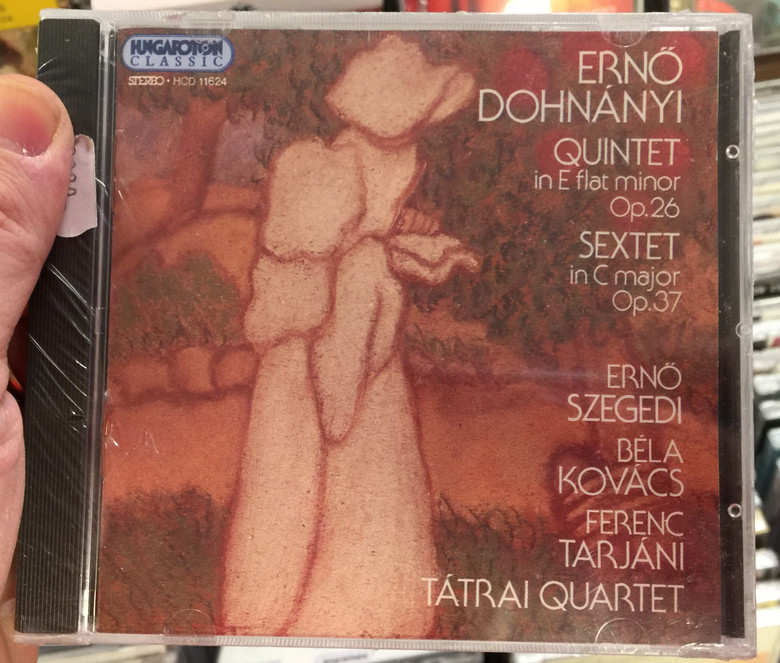 About Dohnanyi:
Ernst von Dohnányi (Hungarian: Dohnányi Ernő; 27 July 1877 – 9 February 1960) was a Hungarian composer, pianist and conductor. He used a German form of his name on most of his published compositions.

Dohnányi studied in Budapest at the Royal Academy of Music, where his first symphony was performed in 1897. As a pianist he traveled widely and established a reputation as one of the best performers of his day.

He taught at the Berlin Academy for Music (1908–15) and was conductor of the Budapest Philharmonic and associate director of the Budapest Academy of Music (1919). In 1931 Dohnányi was musical director of Hungarian radio. In 1948 he left Hungary as a political exile; his influence under the prewar regime was held against him, and his music was banned in communist Hungary for more than 10 years. He taught in Argentina and from 1949 held the position of composer-in-residence at Florida State University. He became a U.S. citizen in 1955.

Dohnányi’s music, which was chiefly influenced by Johannes Brahms, was late Romantic and conservative in style, and after 1910 he occupied only a minor place among contemporary Hungarian composers. His works include the Ruralia Hungarica for violin, three symphonies, a ballet, the Suite in F-sharp Minor, three operas, and chamber works, notably the Second String Quartet and the two piano and string quintets.

Dohnanyi's musical genius is now coming to be recognized, 50 years after his death.

The Quintet Op 26 is my all-time favorite piece of chamber music, period. It is mystical philosophy translated into sound. The opening theme, in sotto voce strains two octaves apart, bares our awe before the unknown. The middle movement is an appreciation of love, absurdity and humor. The third and last movement opens with a full fugue in the strings, followed by a chorale in the unaccompanied piano. Magically, the fugue theme comes returns overlaid with the opening theme from the first movement, and the 2nd theme from the first movement chimes in as well in a climax of compositional virtuosity. When the dust clears, and that opening theme returns in a major key, it's just as though we've died and gone to heaven.

Sextet in C Major, Op.37 For Violin, Viola, Cello, Clarinet, Horn and Piano Live recording 2012 Erard Ensemble: Edward Janning - piano Hein Wiedijk - clarinet Laurens Otto - horn Casper Bleumers - violin Guus Jeukendrup - viola Jan Bastiaan Neven - cello "The Sextet in C Major, Op.37, dates from 1935 and is Dohnanyi's last piece of chamber music. It is for the unusual combination of clarinet, horn, piano, violin, viola and cello. This fact has virtually insured it would be little heard in concert—a great pity because it is a masterwork. From a tonal standpoint, the Sextet shows Dohnanyi alive to the musical developments in the Europe of the 1930's, jazz in particular, which was gaining a real foothold throughout western and central Europe. The opening Allegro appassionato is a big and, at times, turbulent movement. It begins with a marvelous heroic theme introduced by the horn. It has a dramatic, epic quality to it, combined with a sense of suspense. The overall mood is not particularly sunny, although it has its moments, for the most part is dark and ominous. The second movement, Intermezzo, adagio, begins quietly and in a dark vein with the piano playing a rising series of chords, piercing the longer-lined string parts. In no way is it an intermezzo in the Mendelssohnian sense. After some while, a menacing, highly dramatic slow march is introduced. One might imagine a gang of prisoners being paraded to the spot where their execution was to take place. Although the movement ends quietly, no sense of tranquility is created. The third movement, Allegro con sentimento—presto, quasi l'istesso tempo—meno mosso, is a loose set of variations. The main theme, very Brahmsian, is entrusted to the clarinet, which presents it in its entirety. The first variation has the piano elaborating upon it quietly. The horn is used tellingly to create a sense of weight in the slower variations. As the movement ends, the horn brings back the opening theme of the first movement which leads, without pause, directly to the brilliant finale, Allegro vivace, giocoso. Primarily written in the style of the European jazz of the 1930's, the mood is playful and yet at the same time, the treatment is also serious. As one wag has written, the music sounds like an inebriated Viennese hotel band's haphazard attempt to render Gershwin. Incredibly, right in the middle of the jazzy theme, a lopsided Viennese waltz is interjected, as if the musicians had suddenly become confused and lost their way, but continued nonetheless in a desperate attempt to save face. The coda is an extraordinary combination of the jazz elements, the waltz and the heroic opening theme. This is an extraordinary work of the first magnitude. Here are four very striking movements, each quite different and yet interrelated. The part writing could not be better and one feels that nothing could be more natural than a work for piano, string trio, horn and clarinet. Of course, the exact opposite is true."---The Chamber Music Journal Ernst von Dohnanyi (1877-1960 Ernö Dohnányi in Hungarian) is generally regarded, after Liszt, as Hungary's most versatile musician. He was an active as a concert pianist, composer, conductor and teacher and must be considered one of the chief influences on Hungary's musical life in the 20th century. Certainly, his chamber music is very fine, with most of it being in the masterwork category. Yet, sadly and inexplicably, it has virtually disappeared from the concert stage. Dohnanyi studied piano and composition in his native Pressburg (Bratislava) before entering the Budapest Academy. His first published work, his Piano Quintet No.1, was championed by no less an authority than Johannes Brahms. Upon graduating in the spring of 1897, Dohnanyi embarked on a dazzling career as a concert artist, often playing in chamber ensembles. Later, he also devoted considerable time to teaching and conducting.