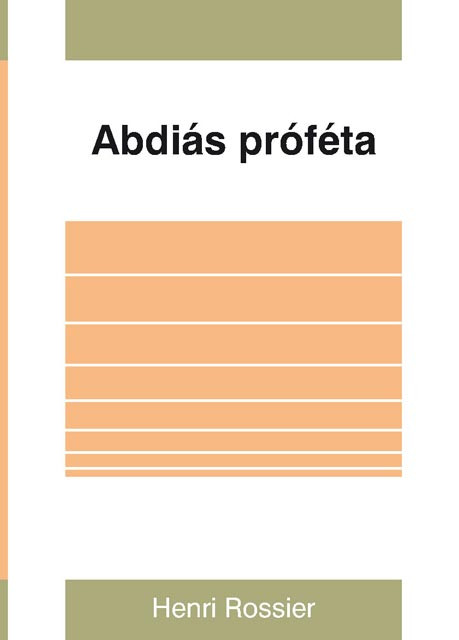 Abdiás próféta by Henri Rossier - Hungarian translation of Der Prophet Obadjah / The Prophet not only warns of the verdict that strikes Edom, but also provides a great insight into the coming kingdom of peace of Jesus Christ

Abdiás próféta by Henri Rossier - Hungarian translation of Der Prophet Obadjah / The Prophet not only warns of the verdict that strikes Edom, but also provides a great insight into the coming kingdom of peace of Jesus Christ

Dr. Henri L. Rossier was born on January 25, 1835 at Vevey in French Switzerland to a family that was among the first there to gather to the Lord Jesus alone. After studying medicine at Zurich and Wurzburg he settled in his native Vevey, where he lived a long life of devoted self-sacrificing service. At age 27 he married Madeleine de Graffenried from Berne, and the Lord in time granted them six children. Along with practicing medicine for well over fifty years, as time went on he increasingly devoted himself to ministering the Word in assemblies and taking part in Bible conferences in Switzerland, Germany, and France.

However, it is for his written work that he is best known today. Acquainted from his youth with J.N. Darby, he began early in life to translate this brother´s writings into French. He was helpful also with the editing of Darby´s translation of the Bible into French and with preparation of the volumes of ETUDES SUR LA PAROLE, later to become better known as the SYNOPSIS after it had been translated into English. For 58 years he served as editor of MESSANGER EVANGELIQUE, a monthly magazine for the edification of believers widely circulated throughout the French-speaking world. He wrote many articles for this magazine himself, often while being driven in a horse-drawn coach to the homes of his patients.

Besides this, he wrote commentaries on most of the books of the Bible, especially on the historical and prophetic books of the Old Testament and on the epistles of Paul and Peter and the Revelation in the New Testament. He was a prolific hymn writer as well. Some 28 of his hymns are included in HYMNES ET CANTIQUES, the hymn book used among many French-speaking assemblies and which he played a major role in compiling and revising. Some of his hymns have been translated into English, as have his commentaries on Joshua and Judges.

After a long and useful life of service, he was called home to be with the Lord on March 20, 1928 at the advanced age of 93.

Prophet Obadiah left us a very short message, and it is possible to summon Jeremiah in several places. He is not prophesying primarily from Israel or directly about the Messiah. However, if someone is studying this "little prophet", he will discover an in-depth message in his writing. For Obadiah is dealing with the pride of Edom and his hatred to his brother, Israel. The Prophet not only warns of the verdict that strikes Edom - Edom will play an important role in the future, but also provides a great insight into the coming kingdom of peace of Jesus Christ. In the appendix: H. P. Barker: The Book of Obadiah (Detail from Christ in the Books of Little Prophets.)