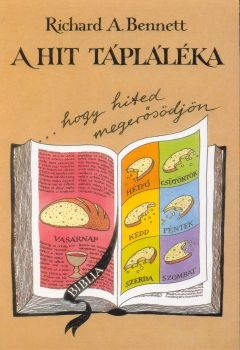 A hit tápláléka by RICHARD A. BENNETT - HUNGARIAN TRANSLATION of Food for faith / A Dynamic book / Great for a possible book study at church bible study

A hit tápláléka by RICHARD A. BENNETT - HUNGARIAN TRANSLATION of Food for faith / A Dynamic book / Great for a possible book study at church bible study

The book presents practical principles that we can learn by applying in our lives about how we can work with God in an increasingly balanced and cohesive community.

The professional career of Pastor Richard A. Bennett commenced as a City Planner in England. While he was studying and training for this position, Richard encountered the risen Lord Jesus Christ in a life-transforming way. Immediately he became actively and enthusiastically involved in sharing the good news of the Gospel. This included extensive personal witness; organizing town-wide evangelistic rallies and campaigns; open air evangelism and hospital visitation. At the same time, Richard preached in many churches in his home town and throughout the surrounding areas. Many such churches were not biblically oriented. However, by His grace, God drew both young and old to Himself. To establish young converts in their Christian life, Richard became involved in initiating and leading an interdenominational Bible study. This, in turn, provided a spring-board for further evangelistic endeavors and among many other blessings a closed village church was permanently re-opened!

Upon completion of Richard’s "Articles" as preliminary qualification for Civil Engineering, he was appointed to the staff of the Norfolk Country Council Planning Office. However, though his position was rewarding and secure (England was in the process of reconstruction following the bombings of World War II) at the prompting of the Lord, Richard resigned his position to pursue further biblical studies in the USA.

Immediately upon arrival in America, Richard accepted an invitation to become Pastor of a church in Rhode Island. While pastoring the church, he became a full-time student at the College which later led to his being asked to represent the College throughout the USA and in Eastern Canada in extension ministry. Upon graduation, Richard accepted the invitation to pastor, with his father-in-Christ, Stephen F. Olford, at the well-known Duke Street Baptist church, London, England. These were very happy days of fellowship in Christ both in the Church and in extensive outreaches.

In 1958 Richard married Dorothy Hayward who held a senior nursing position in a British hospital. Together they were publically commissioned from Duke Street Church and likewise at a later date from Calvary Baptist Church in New York City into a world-wide ministry which still continues through Cross Currents International Ministries.

Richard was publically ordained as a minister of the Gospel by an interdenominational examining board of well-known evangelical ministers from the New York/New Jersey area. In 1971, in recognition of Richard’s insights and biblical studies which he shared for three successful years with pastors, he was conferred a Doctor of Divinity Degree. Later, after ministering to the students at Maryland Bible College and Seminary in Baltimore he was further honored with a second Doctor of Divinity Degree.

… To strengthen your faith

... If you like the prospect of having a quiet time spent with God that can fill your heart with joyful expectation. But there may be days when family affairs, occupation, or other affairs will draw your attention and your time, and make it very difficult for you to turn away and be alone with God. Such days require you to be truly disciplined in this field if you want to grow in the love and knowledge of the Lord Jesus Christ. Find out: if you neglect the Bible, it is as if you were not having a Bible and you would be hungry…