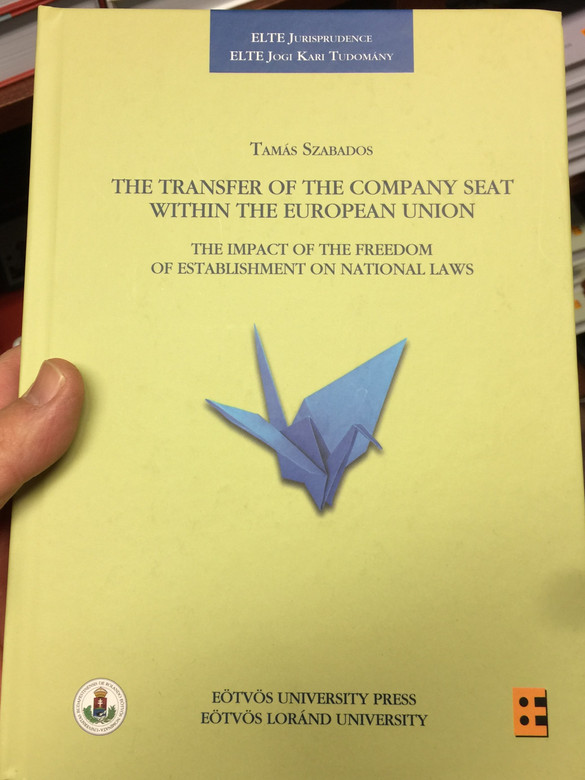 The book deals with the issue of the transfer of the company seat within the European Union. The monograph analyses how the freedom of establishment provisions of the Treaty on the Functioning of the European Union and the related case law influence national rules on the transfer of the company seat. The interest of legal scholarship usually turns to the primary and secondary legal sources of the EU related to the transfer of seat. Undoubtedly, this is the most obvious form of appearance of EU law. Less attention is paid, however, to the other, less-known layer of the application of EU law: this is the realm of national legislation and court practice on the freedom of establishment. In absence of harmonization and taking into consideration the uncertainties stemming from the case law of the Court of Justice of the European Union, the competence of the Member States is retained in many respects. This increases the significance of national laws and therefore it is worth scrutinizing the different paths of development of the legislation and judiciary practice of the Member States in this field. The book may be of interest primarily to practitioners and students, but it is recommended for anyone wishing to get a deeper understanding of the cross-border mobility of companies.

Szabados is Senior Lecturer of International Law and European Economic Law at the Faculty of Law of Eötvös Loránd University, Hungary. In 2012, he received his Ph.D. from this institution with a thesis entitled “The Transfer of the Company Seat within the European Union - The Impact of the Freedom of Establishment on National Laws.” He also holds an LL.M. degree from the University of London, United Kingdom.

During his stay at the Center, Szabados will examine human rights in European Union law. Although European integration was initially centered around the free movement of goods, persons, services and capital, human rights have gradually gained recognition in European Union law. However, the four freedoms and human rights may get into conflict with each other, and the Court of Justice of the European Union (ECJ) has to strike a balance between them. Szabados’ research intends to reveal the methodology of the ECJ to strike a balance between these rights and the inherent uncertainties involved in the application of the proportionality test. Szabados will compare cases of the U.S. Supreme Court and the European Court of Human Rights.