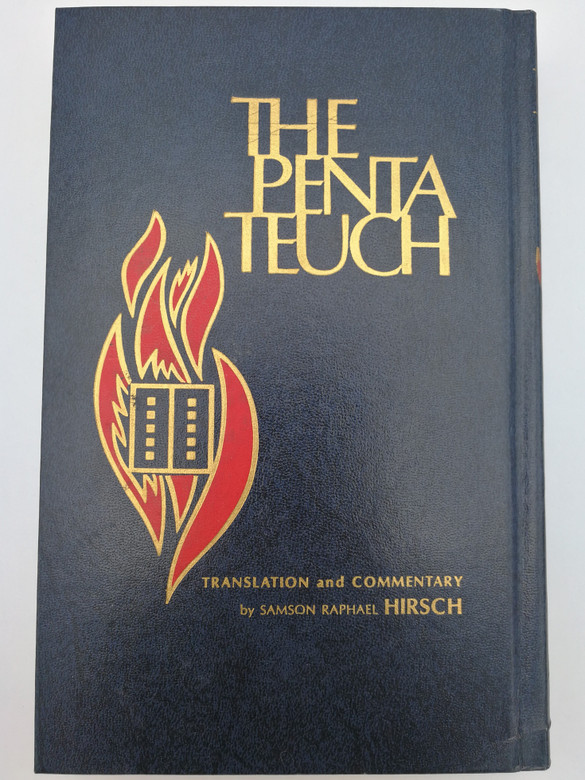 This is Volume 3 (Leviticus) of the 7 volume series on the Pentateuch by Samson Hirsch. The Hebrew text is set next to the English translation on each page, with the English commentary on the bottom of the page.

The heart of Samson Raphael Hirsch’s literary corpus is his great commentary on the Pentateuch. In the commentary’s heyday, the German Jewish communities treated it with the reverence traditionally accorded Rashi on the Torah, and it was always to be found on the desks of both scholars and laypersons. Although the vast literature on Hirsch focuses on his life and his doctrine of Torah im Derech Eretz, much has been written about various aspects of the commentary on the Pentateuch, including Hirsch’s approach to the reasons for the precepts, his etymological method, his attitude toward the modern world, his treatment of the patriarchs’ transgressions, and his method as a translator. In addition to these interests, Hirsch’s commentary on the Pentateuch is marked by a fine and well-developed literary sensitivity that comes to the fore in many places. Not only has this not been studied in detail; it is never even mentioned in the various introductions to and studies of Hirsch. It must be acknowledged that the literary elements of Hirsch’s commentary are heavily outnumbered by what can be defined as derash. Still, the extensive attention to other facets of his personality and exegesis has led to the total neglect of the literary aspects of Hirsch’s commentaries and has overshadowed his aesthetic and literary sensitivity. Thus there is good reason for examining this aspect of his work—and that is the goal of the present article. I focus on four literary phenomena that Hirsch addresses systematically: multiple points of view; the designations applied to biblical characters; the phenomenon of consecutive statements; and word order.

Samson Raphael Hirsch (Hebrew: שמשון רפאל הירש‎; June 20, 1808 – December 31, 1888) was a German Orthodox rabbi best known as the intellectual founder of the Torah im Derech Eretz school of contemporary Orthodox Judaism. Occasionally termed neo-Orthodoxy, his philosophy, together with that of Azriel Hildesheimer, has had a considerable influence on the development of Orthodox Judaism.

Hirsch was rabbi in Oldenburg, Emden, and was subsequently appointed chief rabbi of Moravia. From 1851 until his death, Hirsch led the secessionist Orthodox community in Frankfurt am Main. He wrote a number of influential books, and for a number of years published the monthly journal Jeschurun, in which he outlined his philosophy of Judaism. He was a vocal opponent of Reform Judaism, and similarly opposed early forms of Conservative Judaism.