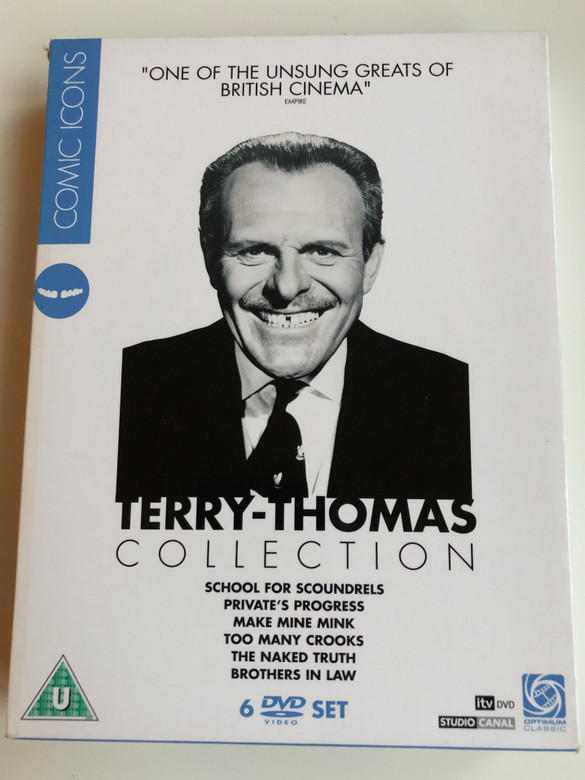 Collection of six films featuring British comedy actor Terry-Thomas. In 'School for Scoundrels' (1960), Henry Palfrey (Ian Carmichael) is one of life's losers. Despised and disregarded at work, his prospective girlfriend April (Janette Scott) is whisked from under his nose by charming bounder Raymond Delauney (Terry-Thomas). In desperation, Henry enrols at Stephen Potter's (Alastair Sim) College of Lifemanship, where he gradually learns how to get one up on the other fellow. In 'Private's Progress' (1956), upper-class twit Windrush (Ian Carmichael) causes military mayhem when he joins up in the army. An inept soldier, he unwittingly becomes involved in his high-ranking uncle's (Dennis Price) scam to appropriate some rather valuable spoils of war - a haul of German jewels. 'Make Mine Mink' (1960) is based on the stage play by Peter Coke. When Dame Beatrice Appleby (Athene Seyler) receives a fur coat from her ex-jailbird maid Lily (Billie Whitelaw) she can't help but suspect that it was stolen. In order to set things right she gathers together a team of local misfits, headed by the eccentric Major Rayne (Terry-Thomas), and draws up plans for a reverse-heist which will secretly put the mink back into the hands of its rightful owners. However, when the gang set out on their mission, they soon begin thinking that their talents could be put to other uses. In 'Too Many Crooks' (1958), Fingers (George Cole) and his gang of crooks seem to be having a run of bad luck, as they keep botching one job after another. When they try to rob the wealthy philanderer Billy Gordon (Terry-Thomas) they manage to get things wrong once again and end up kidnapping his wife Lucy (Brenda Da Banzie) instead. Unfortunately, Billy is overjoyed to have his wife gone and makes no effort to pay the ransom, which makes Lucy mad and absolutely determined to have her revenge. In 'The Naked Truth' (1958), Nigel Dennis (Dennis Price) is an unscrupulous tabloid publisher who is making himself rich by approaching celebrated personages with scandalous stories and offering not to print them for a certain fee. But some of his targets have had enough of this and are drawing up plans to do away with the rotten fellow. Terry-Thomas plays the aristocratic Lord Mayley, while Shirley Eaton plays model Melissa Right, and Peter Sellers is TV star Sonny McGregor. The Boulting Brothers comedy 'Brothers in Law' (1957) stars a host of British stars. Roger Thursby (Ian Carmichael) is an overly keen, newly-qualified barrister who rubs his fellow barristers up the wrong way. When he is thrown in at the deep-end, with a particularly hot-tempered judge (Miles Malleson) and tricky case, Thursby learns how to prove himself not only to the judge and fellow barristers but also to the public gallery.

School for Scoundrels is a 1960 British comedy film directed by Robert Hamer (and an uncredited Cyril Frankel and Hal Chester). It stars Ian Carmichael and Terry-Thomas. It was inspired by the "Gamesmanship" series of books by Stephen Potter. It has been remade twice: in Bollywood under the title Chhoti Si Baat (1975), and in Hollywood as School for Scoundrels (2006).

Henry Palfrey (Ian Carmichael) is a failure in sport and love, and the easy victim of conmen and employees alike. So he enrols at the "School of Lifemanship" in Yeovil, run by Dr. Potter (Alastair Sim). Late for his appointment, he overhears Potter explaining the principles of lifemanship to the new intake:

Well, gentlemen, lifemanship is the science of being one up on your opponents at all times. It is the art of making him feel that somewhere, somehow he has become less than you – less desirable, less worthy – less blessed.

Palfrey is given an object lesson in this when he has his interview with Potter, who proceeds to win a name-calling game. When Palfrey explains that he is a failure, Potter surmises that a woman is involved. In flashback, Palfrey recounts how he first met April Smith (Janette Scott), knocking parcels from her hands when he rushes to catch a bus. He manages to arrange a dinner date with her.

Private's Progress is a 1956 British comedy film based on the novel by Alan Hackney. It was directed and produced by John and Roy Boulting, from a script by John Boulting and Frank Harvey. During the Second World War, young undergraduate Stanley Windrush (Ian Carmichael), is conscripted into the British Army. Unlike his friend Egan (Peter Jones), Windrush is a most reluctant soldier and struggles through basic training at Gravestone Barracks under Sgt. Sutton (William Hartnell) (Author Hackney spent the first year of his National Service at Maidstone Barracks). Failing his officer selection board, he is posted to a holding unit, under the command of Major Hitchcock (Terry-Thomas). Most of the soldiers there are malingerers and drop-outs, with one of them Private Cox (Richard Attenborough) becoming his mentor in escaping work details and riding the railways without a ticket.

Make Mine Mink is a 1960 British comedy farce film directed by Robert Asher and featuring Terry-Thomas, Athene Seyler, Hattie Jacques and Billie Whitelaw. The screenplay concerns a group of eccentric misfits who go on a spree, stealing mink coats for charity in a Robin Hood-style gang. It was based on the play Breath of Spring by Peter Coke, and its sequels. Seyler and Elspeth Duxbury reprised their stage roles from the London production of Breath of Spring.

A group of lodgers - Major Rayne, Nanette ("Nan") and "Pinkie" Pinkerton - staying at the Kensington apartment of Dame Beatrice, an elderly philanthropist, are bored with their humdrum, restricted lives. Lily, Dame Bea's beautiful, young housekeeper, overhears an argument between their neighbours, the Spanagers. When Mrs. Spanager rejects her husband's gift of a mink coat due to his lies about his business trip, he pretends to throw the coat off their balcony, but actually just hides it. Lily snags it and gives it to her employer to show her gratitude for hiring her despite her criminal record. Dame Beatrice is at first delighted, but then assumes Lily has stolen it. She and the lodgers concoct a scheme to return the fur coat before its owners realize its absence. Despite several comical mishaps, the gang manage to do so using a plan drawn up by the retired Major. The four are so exhilarated by their escapade, they decide to steal more furs, presuming that intricacies of theft should prove no more difficult than was the return of the Spanagers' fur, with all the proceeds of their exploits being donated to charity.

Too Many Crooks is a 1959 British comedy film directed by Mario Zampi. The plot concerns a bunch of inept crooks who kidnap the wife of a shady businessman, only for him to decide he doesn’t want her back. It stars George Cole, Sidney James and Bernard Bresslaw as members of the gang, alongside Brenda De Banzie as the victim and Terry-Thomas as her husband.

The members of a gang, especially Sid, grow impatient as their incompetent leader, Fingers, botches the robbery of a fur store, the latest in a series of disasters. Fingers then comes up with the idea of robbing businessman William Gordon. Gordon bluffs them into believing the police are on their way. Fingers refuses to give up, plotting to kidnap Gordon's daughter. However, he errs yet again and ends up with Gordon's meek wife Lucy instead.

The Naked Truth is a 1957 British film black comedy starring Terry-Thomas, Peter Sellers and Dennis Price. Peggy Mount, Shirley Eaton and Joan Sims also appear. It was produced and directed by Mario Zampi and written by Michael Pertwee. It was released in the U.S. as Your Past is Showing.

Nigel Dennis (Dennis Price) is a blackmailer who threatens to publish embarrassing secrets in his magazine The Naked Truth. After attempting to blackmail a famous scientist (who commits suicide), and an MP (who suffers a heart attack in parliament, and probably succumbs), his latest targets are Lord Henry Mayley (Terry-Thomas), television host Sonny MacGregor (Peter Sellers), writer Flora Ransom (Peggy Mount), and model Melissa Right (Shirley Eaton). Several of them decide independently that murder would be a better solution than paying. However, it is Mayley who by sheer bad luck nearly ends up the victim of both MacGregor and Ransom's schemes. The four eventually join forces and try again. That attempt also fails, but Dennis is then arrested for an earlier crime.

Brothers in Law is a 1957 British comedy film directed by Roy Boulting and starring Richard Attenborough, Ian Carmichael, Terry-Thomas and Jill Adams. The film is one of the Boulting brothers successful series of institutional satires begun with Private's Progress in 1956. It is an adaptation of the novel Brothers in Law by Henry Cecil, a comedy set in the legal profession.

Terry-Thomas (born Thomas Terry Hoar Stevens; 10 July 1911 – 8 January 1990) was an English comedian and character actor who became known to a worldwide audience through his films during the 1950s and 1960s. He often portrayed disreputable members of the upper classes, especially cads, toffs and bounders, using his distinctive voice; his costume and props tended to include a monocle, waistcoat and cigarette holder. His striking dress sense was set off by a 1⁄3-inch (8.5 mm) gap between his two upper front teeth.

Born in London, Terry-Thomas made his film debut, uncredited, in The Private Life of Henry VIII (1933). He spent several years appearing in smaller roles, before wartime service with Entertainments National Service Association (ENSA) and Stars in Battledress. The experience helped sharpen his cabaret and revue act, increased his public profile and proved instrumental in the development of his successful comic stage routine. Upon his demobilisation, he starred in Piccadilly Hayride on the London stage and was the star of the first comedy series on British television, How Do You View? (1949). He appeared on various BBC Radio shows, and made a successful transition into British films. His most creative period was the 1950s when he appeared in Private's Progress (1956), The Green Man (1956), Blue Murder at St Trinian's (1957), I'm All Right Jack (1959) and Carlton-Browne of the F.O. (1959).