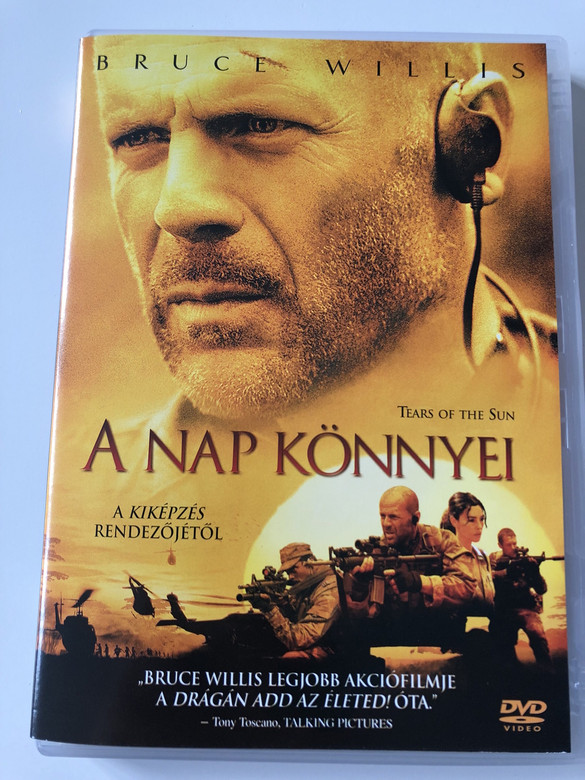 Willis produced Tears of the Sun through Cheyenne Enterprises, his production company, and took the title from an early sub–title for Live Free or Die Hard, the fourth film in the Die Hard series. He filmed the sequel on the condition that he could use its sub-title for his SEALs war film.[citation needed] The cast of Tears of the Sun features refugees portrayed by actual African refugees living in the United States.

The mission begins as planned. Waters tells Dr. Kendricks of the company of rebel soldiers closing in on her hospital and the mission, and that the team's orders are to extract U.S. personnel; however, Kendricks refuses to leave without the patients. Waters calls Captain Rhodes for options; after their short and ambiguous conversation, he concedes to Dr. Kendricks that they will take those refugees able to walk. She begins assembling the able-bodied for the 12 kilometres (7.5 mi) hike; the priest and the nuns stay behind to take care of the injured. Irritated and behind the schedule, the team and the refugees leave their hospital mission after daybreak.

At nightfall they take a short break. Guerrilla rebels rapidly approach their position, and Waters stealthily kills a straggling rebel. Dr. Kendricks warns Waters that the rebels are going to the mission, but he is determined to carry out his orders, and they continue to the extraction point. Back at the mission, the staff and refugees are confronted by rebel forces. Despite the priest's pleas for mercy, the rebel forces execute him and the remaining occupants.

When the team arrives at the extraction point, Waters' initial plan becomes clear: the SEALs suddenly turn away the refugees from the waiting helicopter. Waters forces Dr. Kendricks into the helicopter, leaving the refugees stranded in the jungle, unprotected against the rebels. En route to the aircraft carrier, they fly over the original mission compound, seeing it destroyed and all its occupants murdered, as Dr. Kendricks had predicted. Remorseful, Waters orders the pilot to return to the refugees. He then loads as many refugees as he can into the helicopter and decides to escort the remaining refugees to the Cameroon border.

During the hike to the border, using satellite scans, they discover the rebels are somehow tracking them. As they escape and evade the rebels, the team enters a village whose inhabitants are being raped, tortured, and massacred by rebel soldiers. Aware of having the opportunity to stop it, Waters orders the team to take down the rebels. The team is visibly shaken by the atrocities they see the rebels have committed against the villagers.

Again en route, Slo determines that a refugee is transmitting a signal allowing the rebels to locate them. The search for the transmitter reveals the presence of Arthur Azuka (Sammi Rotibi), the surviving son of late President Samuel Azuka, which they realize is the reason the rebels are hunting them: Samuel Azuka was not only the president of the country, but also the tribal king of the Igbo. As the only surviving member of this royal bloodline, Arthur is the only person left with a legitimate claim to the leadership of Nigeria. Waters is angry at Dr. Kendricks, who knew of Arthur's identity, yet never informed the SEAL team. A newer refugee (Jimmy Jean-Louis) picked up during the trek is discovered with the transmitter on his person. He attempts to run but is shot.

The team decides to continue escorting the refugees to Cameroon, regardless of the cost. A firefight ensues when the rebels finally catch up with the SEALs, who decide to stay behind as rearguard to buy the refugees enough time to reach the border safely. Zee radios the Truman for air support; two F/A-18A Hornets take off and head for the firefight. The rebels kill Slo, Lake, Flea and Silk. Waters, Red, Doc and Zee are wounded but direct the fighter pilots on where to attack. Arthur and Dr. Kendricks are scrambling to the Cameroon border gate when they hear the fighter jets approach and bomb the entire rebel force.

Waters, Zee, Doc, and Red rise from the grass as U.S. Navy helicopters land in Cameroon, opposite the Nigerian border fence gate. Captain Rhodes arrives and orders the gate open, letting in the SEALs and the refugees. A detail of U.S. Marines then escorts the SEALs to the helicopters. Captain Rhodes promises Waters that he will recover the bodies of his men. Dr. Kendricks says her tearful farewells to Nigerian friends and flies away in a helicopter while romantically embracing Waters, watching as Arthur is surrounded by his people proclaiming their freedom. 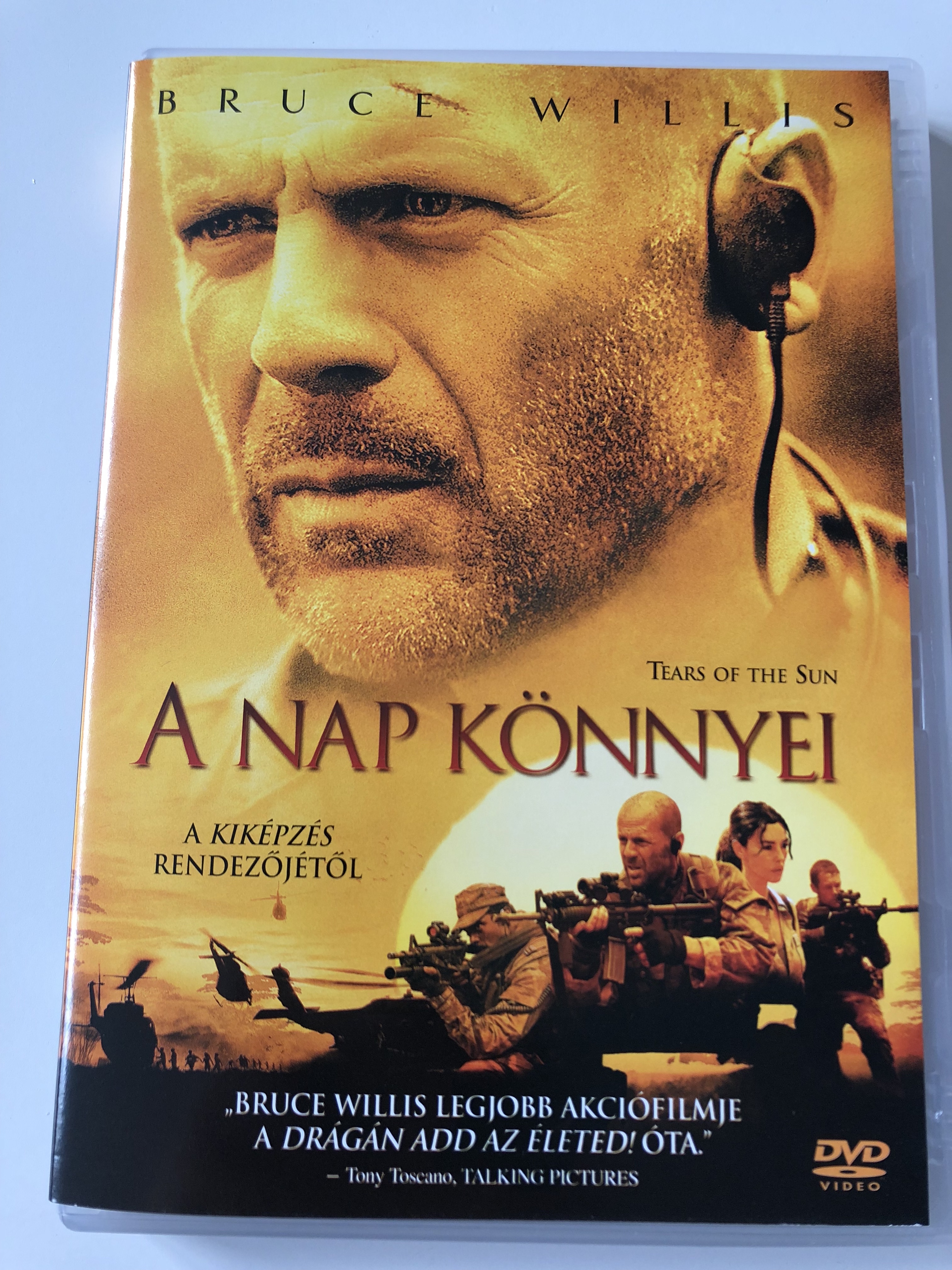 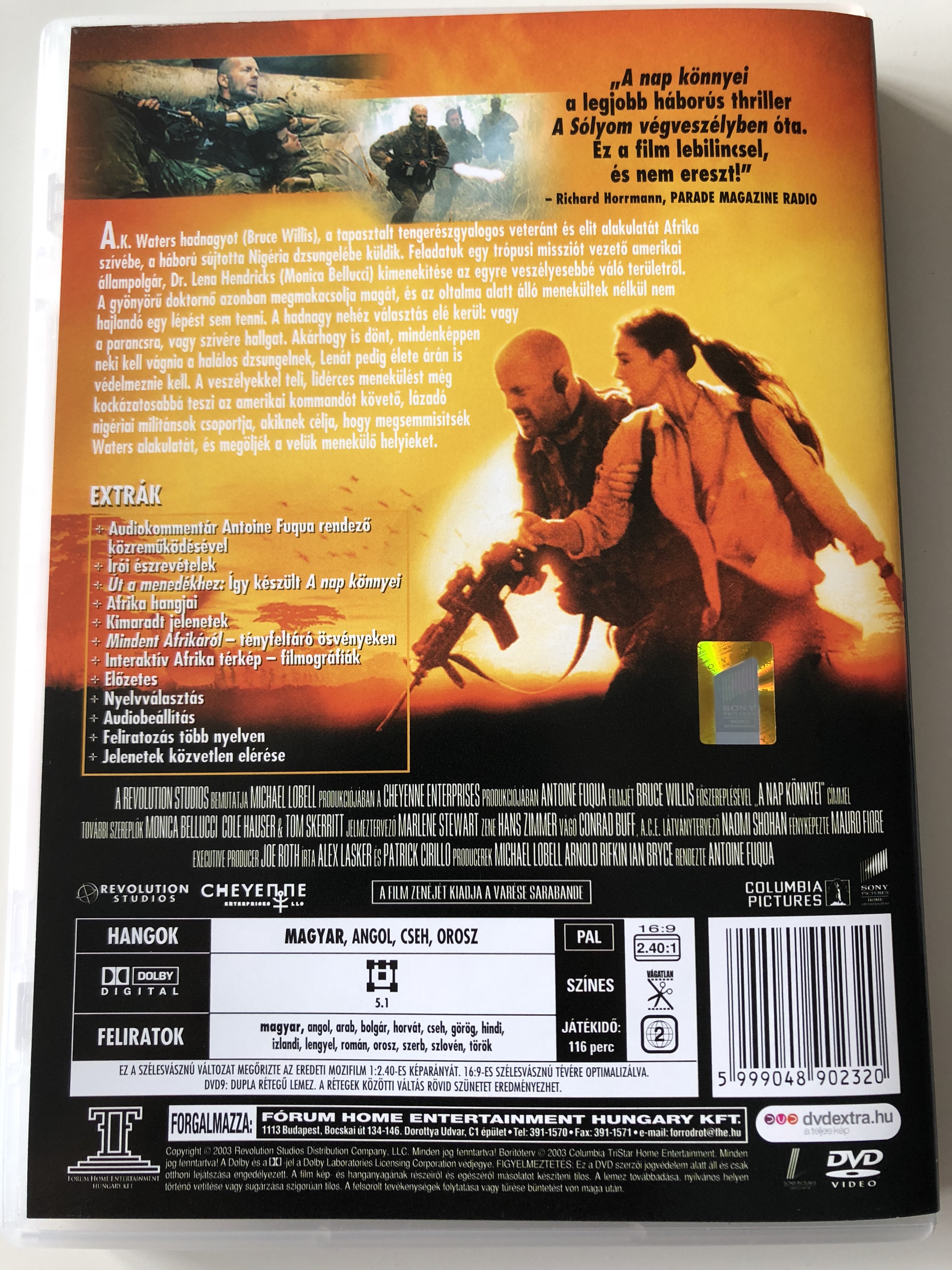