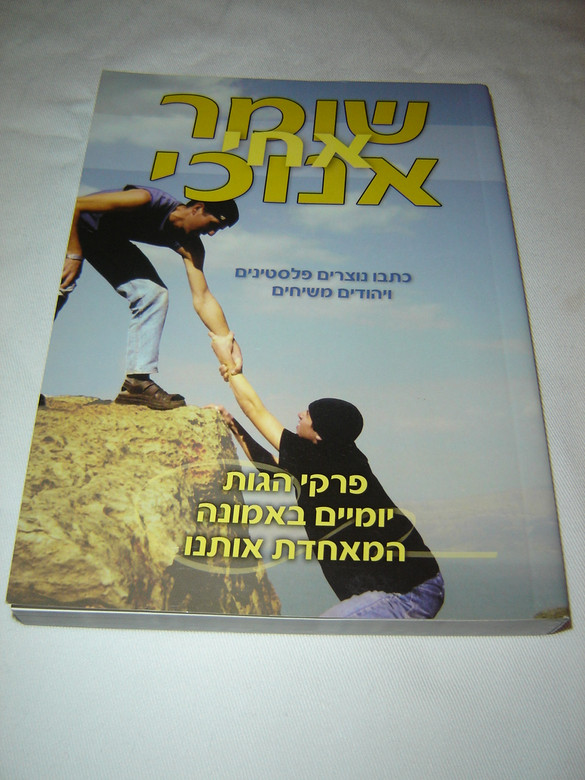 My Brother's Keeper - Daily Devotions in the Faith that Unites Us in Hebrew Language / a Book written by Messianic Jews, Arab Israeli Christians, and Palestinian Christians

My Brother's Keeper Acknowledge that the Lord is God. He made us, and we belong to Him, we are His people ... Psalms 100:2-3 The devotional readings in this book were written by about forty believers in Jesus. Most of the writers are Israeli Jews and Arabs, and Palestinian Christians. A few are expatriates who belong to Arabic -or Hebrew-speaking congregations. All are believers in Jesus. While there are obvious differences in culture - differences that are sometimes expressed in the devotions - it is exciting to see how united these believers are in their faith in one Lord, Jesus the Son of God.
INTRODUCTION: The body of believers in Jesus in the land of the Bible is statistically a small minority of the population. Some might say that it is an insignificant minority, but they would be wrong. The church of Jesus Christ, those whom Gad has called out to be his own, stands in the place of highest significance and strategic importance. While Jesus prayed that his church might be one, many forces are at work to make divisions in what God intended to be a united witness to the truth of Jesus. Politics, ethnic identities, doctrinal and cultural differences, all these push themselves forward claiming to be more important than the unity of the believers. If we think about it, we know it is a lie, but still we are pulled too easily into the views of the world that does not have Jesus. This book of devotional readings, printed simultaneously in Arabic, Hebrew, and English, has been initiated by the three Bible Societies that operate together in this land: the Bible Society of Israel, the Palestinian Bible Society, and the Arab Israeli Bible Society. The book's name, My Brother's Keeper, declares that we are brothers and sisters first of all. Before we are Israelis or Palestinians, Arabs or Jews, we are redeemed children of God with one Father and one Lord, sharing one main reason for being here on this earth and in this land: to glorify God as we live our lives ...