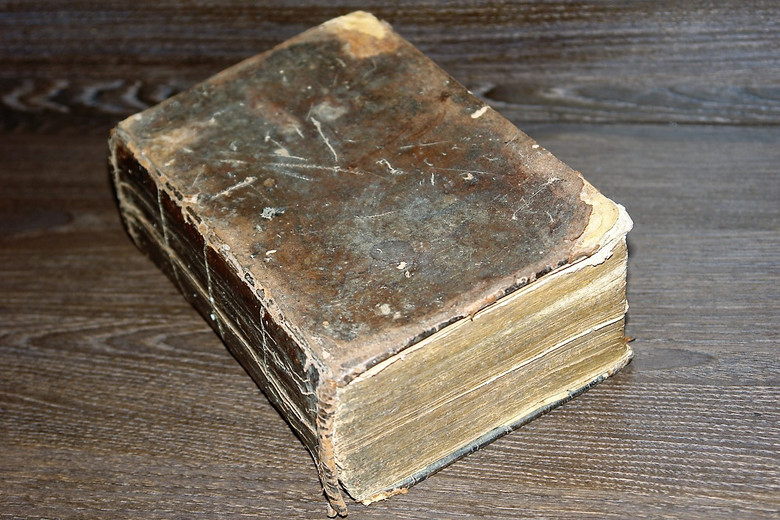 COMPLETE, none of the printed pages missing!   Some of the pages are loose!

Please, look at the product pictures carefully for further evaluation, we did our best to photo this great Bible.

The German word Schwabacher (pronounced [ˈʃvaːˌbaxɐ]) refers to a specific blackletter typeface which evolved from Gothic Textualis (Textura) under the influence of Humanist type design in Italy during the 15th century. Schwabacher typesetting was the most common typeface in Germany, until it was replaced by Fraktur from the mid 16th century onwards.

Blackletter (sometimes black letter), also known as Gothic script, Gothic minuscule, or Textura, was a script used throughout Western Europe from approximately 1150 to well into the 17th century. It continued to be used for the Danish language until 1875, and was used for the German language until the 20th century. Fraktur is a notable script of this type, and sometimes the entire group of blackletter faces is incorrectly referred to as Fraktur.

THIS OFFER IS FOR A CZECH BIBLE IN:  Blackletter, AKA Gothic script, Gothic minuscule, or Textura

The Czech literature of the Middle Ages is very rich in translations of Biblical books, made from the Vulgate. During the 14th century all parts of the Bible seem to have been translated at different times and by different hands. The oldest translations are those of the Psalter. The New Testament must also have existed at that time, for according to a statement of Wyclif, Anne, daughter of Charles IV, received in 1381 upon her marrying Richard II of England a Bohemian New Testament.

It is certain that Jan Hus had the Bible in Bohemian before him as a whole and he and his successors undertook a revision of the text according to the Vulgate. The work of Hus on the Bible antedated 1412. During the 15th century the revision was continued. The first complete Bible was published at Prague in 1488 (the Prague Bible); other editions were issued at Kutná Hora in 1489, and Venice in 1506. These prints were the basis of other editions which were published from time to time.

With the United Brethren a new period began for the translation of the Bible. In 1518 the New Testament appeared at Mladá Boleslav at the instance of Luke of Prague. It was not satisfactory and the same must be said of the edition of 1533. Altogether different was the translation made by Jan Blahoslav from the original Greek (1564, 1568). The Brethren anon undertook the translation of the Old Testament from the original and appointed for this work a number of scholars, who based their translation upon the Hebrew text published in the Antwerp Polyglot. The work began in 1577 and was completed in 1593, and from the place of printing, Kralice in Moravia, it is known as the Bible of Kralice (6 parts, 1579–93, containing also Blahoslav's New Testament). This excellent translation was issued in smaller size in 1596, and again in folio in 1613 (reprinted at Halle in 1722, 1745, 1766; Pressburg, 1787; Berlin, 1807).

After the year 1620 the publication of non-Catholic Bibles in Bohemia and Moravia ceased, and efforts were made to prepare Bibles for the Catholics. After some fruitless beginnings the work was entrusted to certain Jesuits, who took the Venice edition of 1506 as the basis, but relied greatly, especially for the Old Testament, on the Brethren's Bible. Between 1677 and 1715 the so-called St. Wenceslaus Bible was published at the expense of a society founded in honor of the saint. A new edition appeared at Prague 1769–71. A thoroughly revised edition, using the text of the Brethren's Bible, was published in 1778–80. Still more dependent on the Brethren's Bible was Prochaska's New Testament (Prague, 1786), and his edition of the whole Bible (1804). Editions of Prochaska's text, slightly amended, were issued in 1851 and 1857. The Bible edited by Besdka (Prague, 1860) gives the text of the Brethren's Bible with slight changes. G. Palkovi translated the Bible from the Vulgate into Slovak (2 parts, Gran, 1829).

The first translation of the whole Bible into Czech, based on the Latin Vulgate, was done in 1360. The Bible is called the "Bible of Dresden". This manuscript was lost during World War I. Many other translations followed this Bible of Dresden, and from the linguistic point of view they can be divided in four different redactions. The last one was finally printed.

The first translation from the original languages into Czech was the Bible of Kralice, first published in years 1579–1593. The translation was done by the Unity of the Brethren. The third edition from 1613 is considered classical and is one of the most used Czech Bible translation