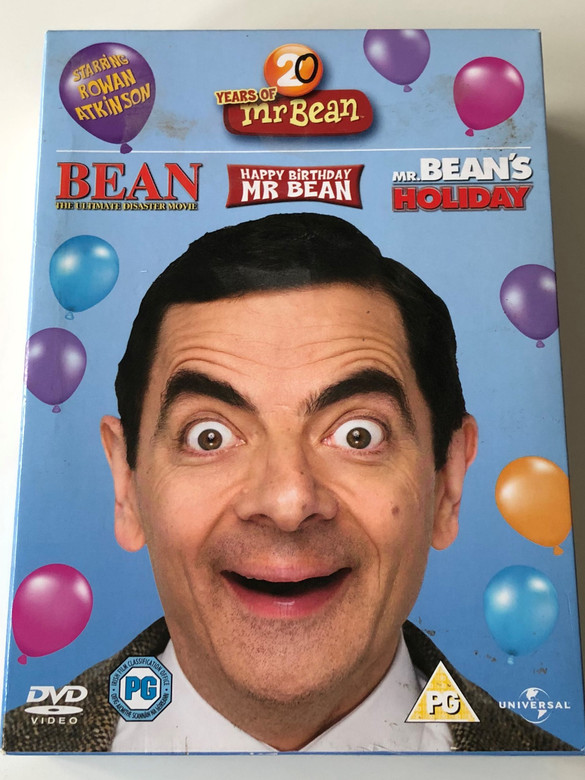 Bean (also known as Bean: The Ultimate Disaster Movie or Bean: The Movie) is a 1997 comedy film based on the British television series Mr. Bean. Directed by Mel Smith and written by Robin Driscoll and Richard Curtis (both writers for the TV series), the film stars Rowan Atkinson as Mr. Bean, Peter MacNicol, Pamela Reed, Harris Yulin, Sandra Oh and Burt Reynolds.

Mr. Bean is a well-meaning yet clumsy and destructive security guard working at the "Royal National Gallery" in London. When the gallery's board of directors, who despise Bean for sleeping on the job, fail to fire him due to the chairman threatening repercussions, the board immediately decides on a different course of action and has him represent them during the transfer of the portrait Whistler's Mother to the Grierson Art Gallery in Los Angeles, following its purchase by philanthropist General Newton for $50 million. The curator of the Grierson, David Langley, who is impressed with the false profile of "Dr. Bean", agrees to accommodate him at his house for two months, much to the chagrin of his wife Alison, his son Kevin and daughter Jennifer. After Bean encounters mishaps with the airport police and accidentally breaks a family heirloom, Alison leaves for her mother's house along with Kevin and Jennifer.

Mr. Bean's Holiday is a 2007 comedy film based on the British television series Mr. Bean, as well as a standalone sequel to 1997's Bean. Directed by Steve Bendelack and written for the screen by Hamish McColl and Robin Driscoll (a writer on the TV series), from a story by Simon McBurney, it is a British-American venture produced by StudioCanal, Working Title Films and Tiger Aspect Films, and distributed by Universal Pictures. The film stars Rowan Atkinson in the title role, with Max Baldry, Emma de Caunes, Willem Dafoe and Karel Roden in supporting roles.

In a raffle, Mr. Bean wins a holiday by train to Cannes, a video camera, and €200. Before catching his train, Bean causes chaos while sampling French seafood cuisine in a Paris restaurant.

On the platform at Gare de Lyon, Bean asks Russian origin movie director Emil Duchevsky (Karel Roden) to film him boarding the train using his new video camera. Bean keeps asking for retakes, until the train leaves with Bean and Duchevsky's son, Stepan (Max Baldry) on the train and Duchevsky is left behind.

Bean and the boy get off at the next station. Duchevsky's train does not stop at the station, and he holds up a mobile phone number, but accidentally covers up the last two digits. Attempts at calling the number are fruitless. They board the next train but Bean has left his wallet, passport, and ticket in the telephone booth, and they are thrown off the train at the next stop.

Contains Episodes: "The Restaurant" from "The Return of Mr. Bean",

"The FunFair" from "Mind the Baby,

Rowan Sebastian Atkinson CBE (born 6 January 1955) is an English actor, comedian, and writer. He is best known for his work on the sitcoms Blackadder (1983–1989) and Mr. Bean (1990–1995). Atkinson first came to prominence in the BBC sketch comedy show Not the Nine O'Clock News (1979–1982), receiving the 1981 BAFTA for Best Entertainment Performance, and via his participation in The Secret Policeman's Ball (1979). His other work includes the James Bond film Never Say Never Again (1983), playing a bumbling vicar in Four Weddings and a Funeral (1994), voicing the red-billed hornbill Zazu in The Lion King (1994), and playing jewellery salesman Rufus in Love Actually (2003). Atkinson also featured in the BBC sitcom The Thin Blue Line (1995–1996). His work in theatre includes the 2009 West End revival of the musical Oliver!.

Atkinson was listed in The Observer as one of the 50 funniest actors in British comedy in 2007, and among the top 50 comedians ever, in a 2005 poll of fellow comedians. Throughout his career, he has collaborated with screenwriter Richard Curtis and composer Howard Goodall, both of whom he met at the Oxford University Dramatic Society during the 1970s. In addition to his 1981 BAFTA, Atkinson received an Olivier Award for his 1981 West End theatre performance in Rowan Atkinson in Revue. He has had cinematic success with his performances in the Mr. Bean movie adaptations Bean (1997) and Mr. Bean's Holiday (2007), and also in the Johnny English film series (2003–2018). He also appeared as the titular character in Maigret (2016–2017). Atkinson was appointed a CBE in the 2013 Birthday Honours for services to drama and charity.