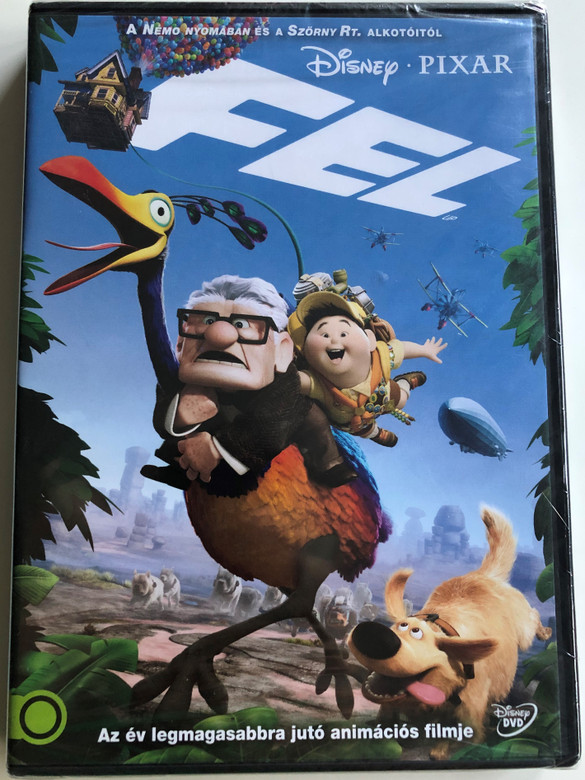 Up is a 2009 American computer animated comedy adventure film produced by Pixar Animation Studios and distributed by Walt Disney Pictures. The film centers on an elderly widower named Carl Fredricksen (Ed Asner) and an earnest boy named Russell (Jordan Nagai). By tying thousands of balloons to his house, Carl sets out to fulfill his dream to see the wilds of South America and complete a promise made to his late wife, Ellie. The film was directed by Pete Docter and co-directed by Bob Peterson, who also wrote the film's screenplay, as well as the story with Tom McCarthy, with music composed by Michael Giacchino from The Incredibles and Ratatouille .

Renowned explorer Charles F. Muntz says he has found a new species of giant bird at Paradise Falls, South America. However, archaeologists study the skeleton of the bird and conclude that Muntz fabricated it. Disgraced, Muntz vows to bring back a live specimen and will not return until he does so.

Youngster Carl Fredricksen meets Ellie. Both are aspiring explorers who idolize Muntz, and the two quickly become friends. Ellie reveals her dream to Carl about going to live by Paradise Falls. The two eventually get married and repeatedly save up for a trip to Paradise Falls, but always end up spending the money on more pressing needs. As an elderly man, Carl finally buys tickets for the trip, but Ellie falls ill and dies before they can go.