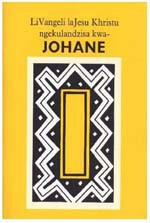 Swati (siSwati in the language itself; isiSwazi in Zulu) is a Bantu language of the Nguni group spoken in Swaziland and South Africa. The number of speakers is estimated to be in the region of 1.5 million. The language is taught in Swaziland and some South African schools. Swati is an official language of Swaziland, (along with English), and is also one of the eleven official languages of South Africa. Although often referred to as Swazi, this is the form of the noun stem indicating the language or its speakers taken from Zulu, which many Swati-speakers also speak. Swati is most closely related to Phuthi (the other larger 'Tekela' Nguni language), spoken in southern Lesotho and the northern Eastern Cape province of South Africa. Swati is also closely related to the 'Zunda' Nguni languages: Zulu (immediately adjacent to the south and east), Ndebele (immediately adjacent to the west, and further north in Zimbabwe), and Xhosa (spoken to the south of Lesotho in the Eastern and Western Cape provinces of South Africa).