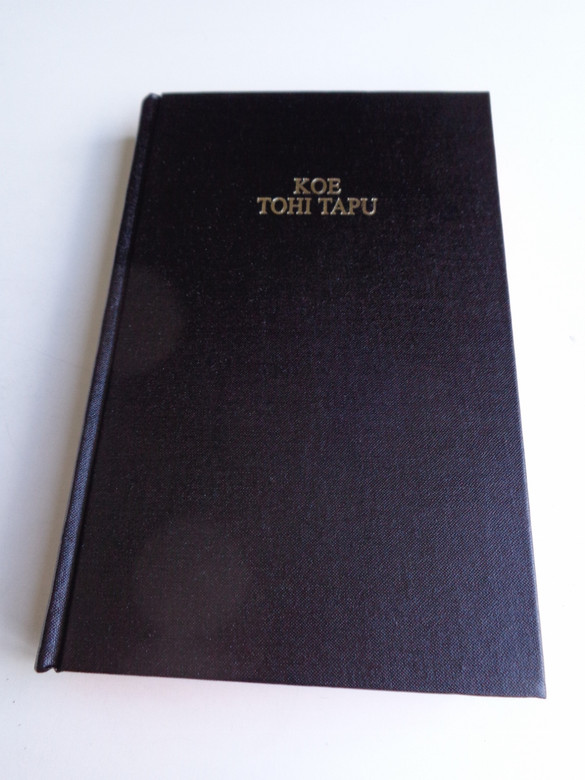 The Old and New Testaments in Niue / Niuean Niue Bible / Black Hardcover 63 / Ko E Tohi Tapu : Ko E Maveheaga Tuai Mo E Maveheaga FouKo / Fou / Red Edges / 8.7 X 5.5 inch / Printed in Korea / Niuean (Niuean: ko e vagahau Niu) is a Polynesian language, belonging to the Malayo-Polynesian subgroup of the Austronesian languages. It is most closely related to Tongan and slightly more distantly to other Polynesian languages such as Mori, Smoan, and Hawaiian. Together, Tongan and Niuean form the Tongic subgroup of the Polynesian languages. Niuean also has a number of influences from Samoan and Eastern Polynesian languages. // Niuean was spoken by 1600 people on Niue Island (97.4% of the inhabitants) in 1991, as well as by speakers in the Cook Islands, New Zealand, and Tonga, for a total of around 8,000 speakers. There are thus more speakers of Niuean outside the island itself than on the island. Most inhabitants of Niue are bilingual in English. In the early 1990s 70% of the speakers of Niuean lived in New Zealand. // Niue is an island country in the South Pacific Ocean, 2,400 kilometres northeast of New Zealand within the triangle formed by Tonga to the west, Samoa to the north, and the Cook Islands to the east.