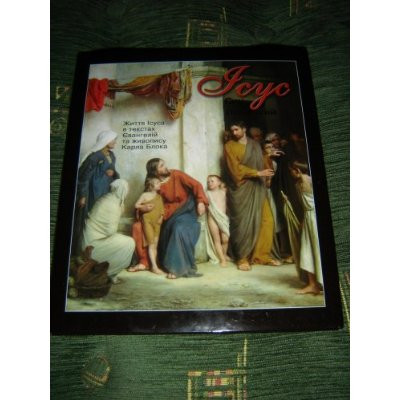 This book contains 40 full color beautiful paintings. The comments are in Ukrainian, but the paintings speak for themselves. Carl Heinrich Bloch (May 23, 1834 - February 22, 1890) was a Danish painter. He was born in Copenhagen and studied with Wilhelm Marstrand at the Royal Danish Academy of Art (Det Kongelige Danske Kunstakademi) there. His early work featured rural scenes from everyday life. From 1859 to 1866, Bloch lived in Italy, and this period was important for the development of his historical style. His first great success was the exhibition of his "Prometheus Unbound" in Copenhagen in 1865. After the death of Marstrand, he finished the decoration of the ceremonial hall at the University of Copenhagen. He was then commissioned to produce 23 paintings for the Chapel at Frederiksborg Palace. These were all scenes from the life of Christ which have become very popular as illustrations. The originals, painted between 1865 and 1879, are still at Frederiksborg Palace. Bloch died in Copenhagen at the age of 63. For over 40 years the Church of Jesus Christ of Latter-day Saints has made heavy use of Carl Bloch's paintings, mostly from the Frederiksborg Palace collection, in its church buildings and printed media. The LDS church has recently produced films depicting scriptural accounts of Christ's mortal ministry, using Bloch's paintings as models for the colour, light and overall set design as well as the movement of the actors in many of the films' scenes. The most notable example of this is the movie The Testaments of One Fold and One Shepherd.