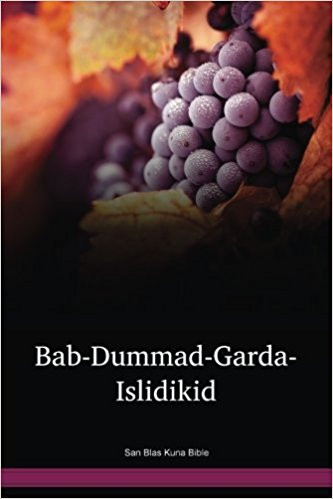 Bible in San Blas Kuna, a language of Panama

The translation of the Kuna Scriptures began almost 40 years ago. A Kuna pastor, Lino Smith, asked for help to provide a New Testament for his people. Working alongside Pastor Lino, Keith and Wilma Forster began work amongst the Kuna. After the publication of the New Testament in 1995, the spiritual walk of believers significantly deepened. But the Kuna church wanted more! They wanted the whole Bible! So work on the Old Testament began.

The Kuna Bible — the 531st complete Bible (Old and New Testament) in the entire world — was dedicated in late September of 2014.

The Kuna, following orthographic reform in 2010 also known as Guna, and historically as Cuna, are an indigenous people of Panama and Colombia. The Congreso General de la Nación Gunadule since 2010 promotes the spelling Guna. In the Kuna language, they call themselves Dule or Tule, meaning "people", and the name of the language in Kuna is Dulegaya, literally "people-mouth".

The Kuna live in three politically autonomous comarcas or reservations in Panama, and in a few small villages in Colombia. There are also communities of Kuna people in Panama City, Colón, and other cities. The most Kunas live on small islands off the coast of the comarca of Kuna Yala known as the San Blas Islands. The other two Kuna comarcas in Panama are Kuna de Madugandí and Kuna de Wargandí. They are Kuna speaking people who once occupied the central region of what is now Panama and the neighboring San Blas Islands and still survive in marginal areas.

The Kuna language is a Native American language of the Chibchan family spoken by 50,000 to 70,000 people. Dulegaya is the primary language of daily life in the comarcas, and the majority of Kuna children speak the language. Spanish is also widely used, especially in education and written documents. Although it is relatively viable, Kuna is considered an endangered language.

The Kuna language, spoken by the Kuna people of Panama and Colombia, belongs to the Chibchan language family.