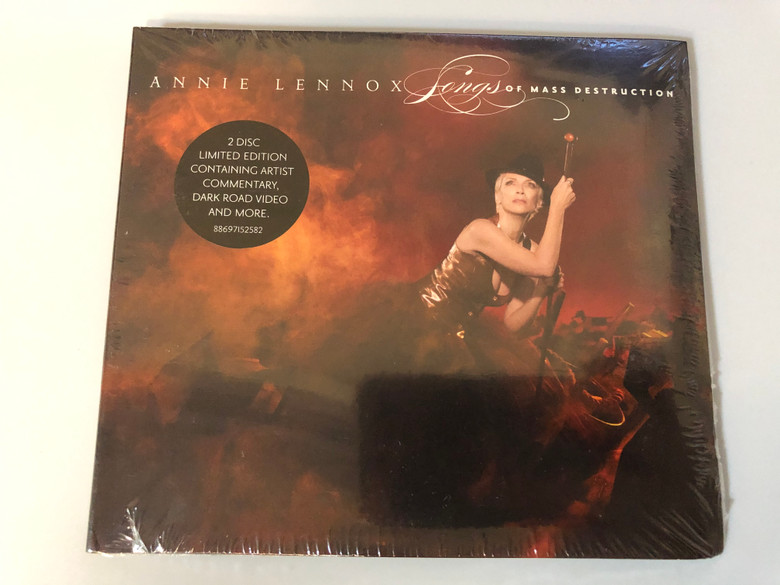 Menacing as they sound, the songs of mass destruction gathered on Annie Lennox's fifth solo disc don't manage to so much as nick the gorgeous instrument she's built her career on. Weaving artfully as ever around the contours of songs that suggest the worst--Lennox is world-wise and therefore maybe inevitably world-weary--she imparts gravity and grace in a voice as cloudless and surface-smooth as just-brewed mint tea; from the tentative beginnings of the mournful "Dark Road" to the gospel-bottomed gorgeousness of "Ghosts in My Machine," she's in full command of her considerable vocal powers. And it's possible she's never used them to such moving effect on a single record. Earlier Lennox or Eurythmics albums might have succumbed here and there to slight-seeming experiments in style, but Songs of Mass Destruction doesn't dilly-dally. All swerves, even playful ones (see "Love Is Blind" and "Coloured Bedspread," a synth-y song that wouldn't seem so out of place on a recent Madonna record), are on-message: "Womankind" busts wide open not only because it needs to (a voice this big can't be contained, it reminds us), but to demo empowerment, and the hopeful "Sing" signs off with a seconds-long African guest vocal. There's an upside to the destruction of cultural wellness that led Lennox to write this record, and it's artistic creation. Songs of Mass Destruction is a sterling, rock-solid, expert example. --Tammy La Gorce

Ending her long association with Stephen Lipson, Lennox's fourth solo album, Songs of Mass Destruction, was recorded in Los Angeles with veteran producer Glen Ballard (known for producing Alanis Morissette's album, Jagged Little Pill). It was released on 1 October 2007, and was the last studio album of Lennox's contract with BMG. It peaked at No. 7 in the UK and No. 9 in the US. Lennox stated that she believed the album consisted of "twelve strong, powerful, really emotive songs that people can connect to". If she achieves that, she says, "I can feel proud of [it], no matter if it sells ten copies or 50 million." Lennox described it as "a dark album, but the world is a dark place. It's fraught, it's turbulent. Most people's lives are underscored with dramas of all kinds: there's ups, there's downs – the flickering candle." She added, "Half the people are drinking or drugging themselves to numb it. A lot of people are in pain."