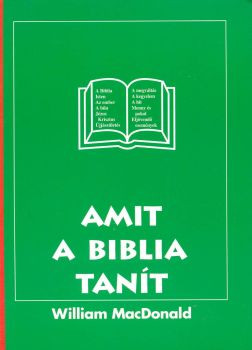 Amit a Biblia tanít by William Macdonald - Hungarian translation of Summary of the Bible / The basic teachings of the Bible in simple, comprehensible form, with questions per topic. Good for new believers or beginners in Bible knowledge

Amit a Biblia tanít by William Macdonald - Hungarian translation of Summary of the Bible / The basic teachings of the Bible in simple, comprehensible form, with questions per topic. Good for new believers or beginners in Bible knowledge.

William (Bill) MacDonald was born on January 7, 1917 in Leominster, Massachusetts. In 1922, in the Western Hebrides, William was dying of diphtheria. A mucous membrane was forming across his throat, and breathing was becoming increasingly difficult. His Christian mother turned her back so she would not see William take his last breath. At that very moment there was a knock at the door. It was her brother-in-law from an adjoining village. He said, "I've just come to tell you that you don't have to worry about William. He is going to recover, and one day God is going to save his soul." Mom was distracted and incredulous: "Whatever makes you say that?". Then he explained he had been sitting at his fire reading Psalm 91 when God distinctly spoke to him through the last three verses. God saved William's soul thirteen years after.

When he was six years old, his family moved to Stornoway, Scotland, later moving back to Massachusetts. He received a Bachelor of Arts degree from Tufts College in 1938 and an MBA from Harvard Business School in 1940.

After graduation, he was employed as an investment analyst at the First National Bank of Boston (now known as BankBoston) until 1942. During 1942, MacDonald enlisted in the Navy, where he served until 1946. He then served on the faculty of Emmaus Bible School until 1965, becoming President in 1959. He contributed greatly to the Emmaus Correspondence School through his writings.

While President of Emmaus Bible College, MacDonald made lasting contributions. Among his accomplishments are numbered:

After 1965, he led a Bible teaching ministry in the USA, Europe and Asia until 1972. In 1973 he served on the faculty of the Discipleship Intern Training Program, based in San Leandro, California, until 1996. After 1996, MacDonald moved back to the Bible-teaching ministry, until his death on December 25, 2007.

The basic teachings of the Bible in simple, comprehensible form, with questions per topic. Young people for the Bible.