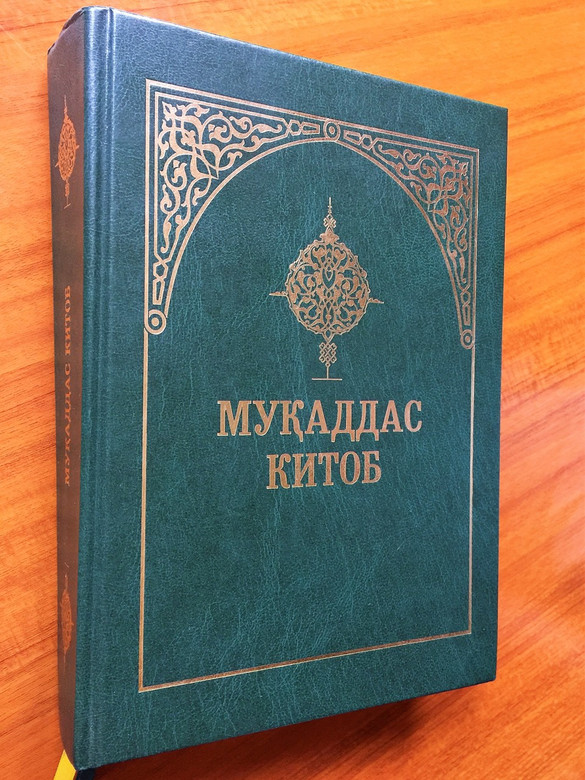 This is the FIRST PRINT of the full Uzbek Holy Bible

This BIBLE is a MIRACLE!   A much needed Bible!   Fro Uzbek believers in Uzbekistan and Tajikistan!  COMPLETE PROTESTANT BIBLE.

In June 2017 the unthinkable happened: a public launch of the first full Uzbek Bible in the capital; Tashkent, and with it an official approval by the Uzbek government. The event was hosted by the Russian Orthodox Church, who had played an important role in the road to the official approval. Present were among others representatives of several (officially registered) churches in Uzbekistan and a representative of the Ministry of Religious Affairs. It was a miracle because not even six months before, we all feared that the new translation had to be distributed in an “unofficial” way. One can image the happiness of the team, some of whom had worked for about 22 years on this project.

The road to this event was a long one

The road to this event was a long one. The publisher, the Institute for Bible Translation (IBT) in Moscow, had already during Soviet time initiated a translation of the New Testament, Genesis and Psalms. These books were published in 1992, a fortuitous moment, just after the collapse of the Soviet Union. Missionaries moved into the country and the number of Uzbek believers grew.

A Bible Society was established, but it took several years before the new Old Testament project, initiated by IBT and later joined by SIL, found a place under the roof of the local Bible Society. The UBS consultant Krijn van der Jagt coached the translators (a university professor in Uzbek language and literature and two young women) and the SIL exegetical checkers, and the result was a harmonious and hardworking team. When Krijn moved back to the Africa region, I took over.

It was impossible to continue the work inside the country

Unfortunately, the political climate began to change rapidly after the horrifying events in Andijan in 2005, in which hundreds of protesting Uzbeks were killed by government forces. Uzbekistan began to expel expats and the SIL checkers were among the many foreigners who had to leave. Also one of the translators, married to an American, was forced to leave. It was impossible to continue the work inside the country.

For about two years the team was trying to find a new balance. The SIL members decided to settle in a neighbouring country, and that’s where in the years to come team meetings were held. For the two local translators the situation was not good: the government and secret police kept a close eye on all kinds of subversive behaviour, among which any kind of “evangelism” was considered.

Uzbek nationals were no longer allowed to become members of Christian communities, and the Uzbek churches had to go underground. The secret police raided homes of local pastors and believers, in the best case only confiscating Christian literature, computers, and DVD’s, in the worst case arresting and jailing people.

Testing the translated Bible books with readers and distributing translations of books that were ready, were no longer self-evident steps in the procedure. Still, the team continued their work faithfully and the translators inside the country worked hard to ensure the translations were adequately reviewed and tested.

At the end of 2016 a beautiful Uzbek Bible was printed. But nobody expected the miracle that happened in the first half of 2017: the government approved the translation. During the celebrations in June 2017 none of the Uzbek churches were officially represented. Only officially approved churches such as the Russian Orthodox, Roman Catholic, Evangelical Lutheran and Russian Baptist Churches were able to attend. The smaller national Uzbek house churches are still underground. But now they have a Bible in their own language and owning a copy is no longer a crime. We hope and pray that Uzbek believers will one day be free not only to read the Scriptures, but also to worship and sing. 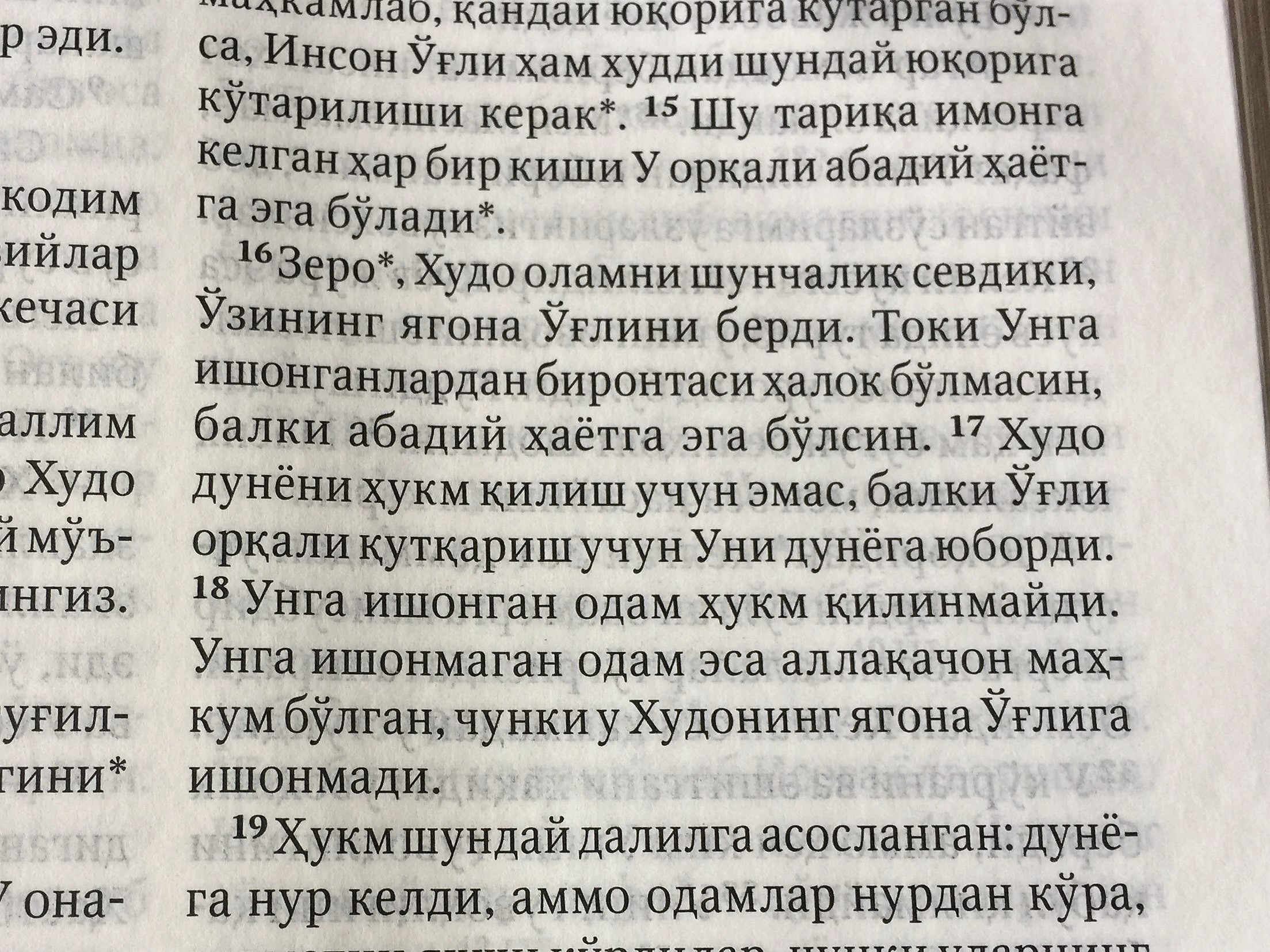 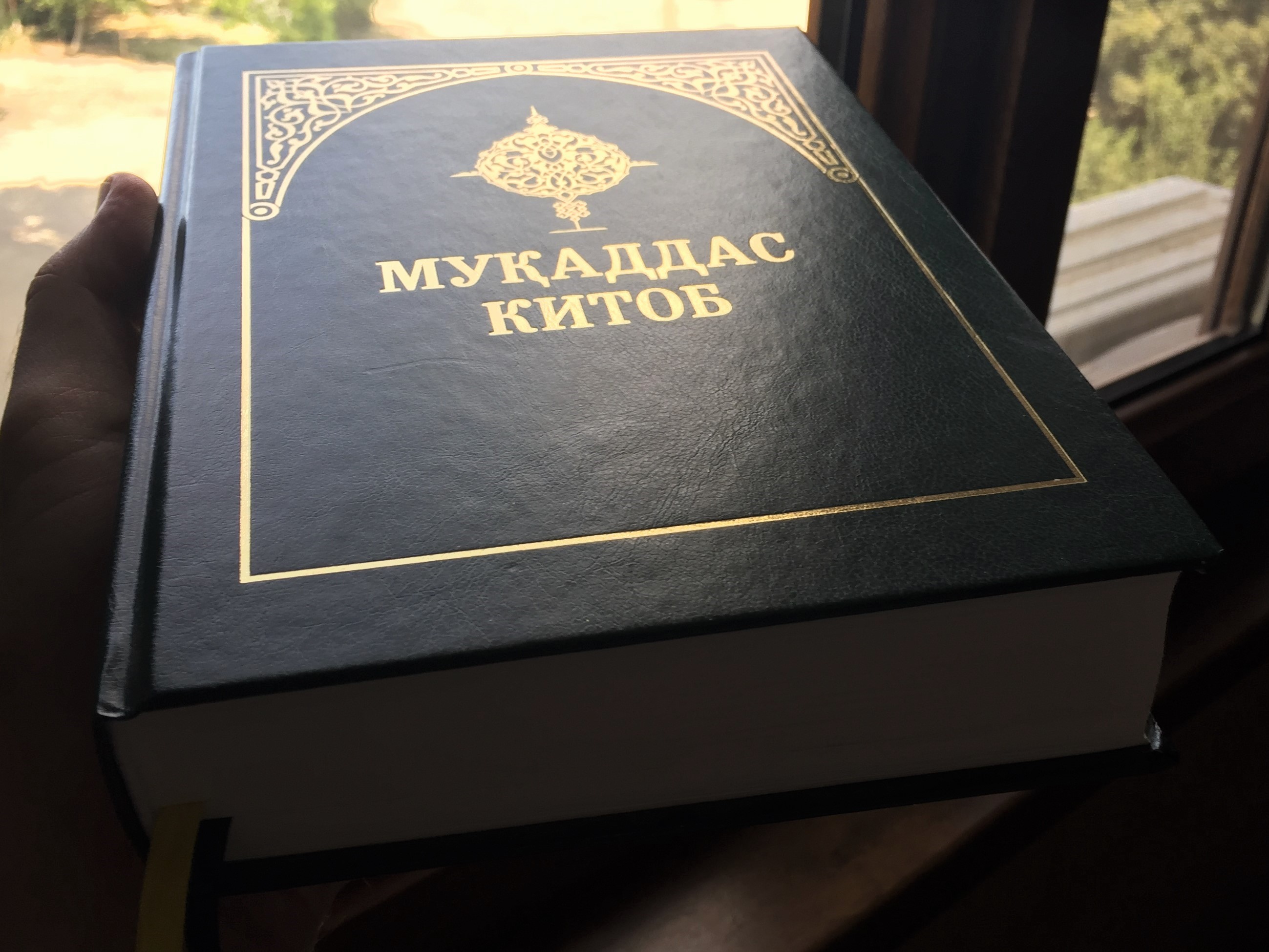