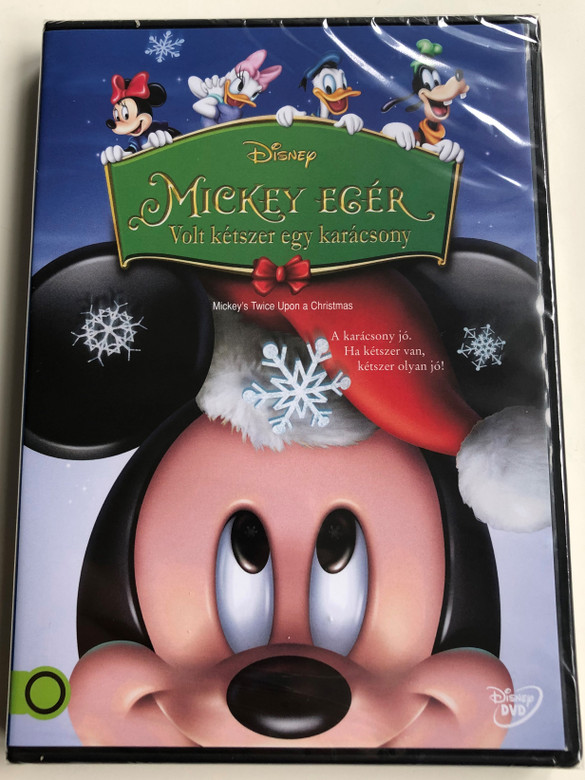 The narrator recites the first ten words of The Night Before Christmas before saying, "Oh, wait. Different story, but we'll still see a mouse". The narrator then announces new tales of giving and loving, and a book opens to show pop-up elves.

The narrator said it all started on the first segment when Minnie Mouse and Daisy Duck were competing in an ice skating competition. The girls each are joined by their boyfriends, Mickey and Donald, as they prepare to take the ice. Daisy becomes envious of the crowd's reaction to Minnie and attempts to steal the spotlight for herself. Minnie performs several daredevil stunts to regain the spotlight while Daisy summons the Fantasia Hippos, who become her backup skaters while her counterpart summons the alligators from the 1940 film. Fed up, Daisy and Minnie argue and shove each other, putting each other at risk and then try pulling dramatic stunts to draw the attention of the crowds as Mickey and Donald watch with worry. When Minnie accidentally slips on a fallen handbell while landing from a stunt blindfolded, Daisy helps Minnie up while feeling sorry for her actions. Minnie feels the same way, and they perform a grand finale.

The second segment tells the story of Huey, Dewey, and Louie celebrating Christmas Eve with Donald and Daisy Duck at Uncle Scrooge's mansion in Duckburg. After causing trouble at dinnertime, the boys know that they are on the naughty list for sure, so they travel to the North Pole to write their names on Santa's good list. At Santa's workshop, the trio cause more trouble such as messing the elves' jobs up, but they and the elves help clean up the mess and save Christmas. Before they leave, they luck into an opportunity to add their names to the good list; however, they add Uncle Scrooge's name instead, mindful of the fact that he was never written onto the list either. On Christmas Day, Santa leaves them a note that explains that their actions have caused them to be also put on the good list.

The third segment's focus is about Max Goof and his father Goofy celebrating the holidays. A young adult Max brings home his girlfriend Mona to meet his father, Goofy. However, Max is unsure whether or not he wants Mona to meet his dad (Most of the story takes place within the song "Make Me Look Good"). Max at first is embarrassed by his dad, who shows baby pictures to Mona and wipes cocoa off Max's face. While wondering outside, he notices that his scarf is made by Goofy and realizes that Goofy is always, well, goofy, and that is why he loves him. Max then forgets about being embarrassed and decides to join in the fun when the popcorn making machine goes haywire. Max tries to stop the machine but has popcorn filling his clothes until he lets go. He becomes embarrassed after having his clothes inflate in front of his girlfriend, Mona and flies across the room. Goofy tries to stop it next, but he is swung around in the air by the machine. Max, Goofy and Mona are all pushed up by the popcorn through the chimney and onto the roof. Following this, Mona then reveals to have the same kind of teeth like Goofy and Max; they all laugh and make snow angels on the roof.

The fourth segment focuses on Donald Duck and his Christmas wish of peace and quiet. Daisy Duck and Huey, Dewey, and Louie also appear. As Donald returns home from grocery shopping, he daydreams and misses his bus. He runs to catch after it, but he is slowed down by a series of well-wishers that begin to sing "We Wish You a Merry Christmas". Donald becomes increasingly annoyed by the joyous people, and at home, he is annoyed to hear the same Christmas carols on his radio. When Daisy and his nephews arrive, Donald becomes annoyed that they want to go out so soon after he returned home, but Daisy drags him out. At the mall, Donald grabs a cup of hot chocolate and discovers various objects seeming to play the same Christmas carol; Donald thinks he is in complete peace inside a secret room, where he finds animatronics singing. Donald immediately wrecks them until he notices he is destroying the show at Mousy's that Daisy, Huey, Dewey, and Louie and also the crowd were trying to see; Dewey tricks Donald into being heartbroken by saying Donald is not their uncle anymore, and Daisy agrees to leave with the boys. After he is thrown out of the mall by the mall guard for his lack of Christmas spirit and destroying the Mousy's show, Donald walks home alone while feeling guilty for his lack of Christmas spirit. He finds Christmas carolers having trouble with singing "We Wish You a Merry Christmas", to which he urges to mentor the performers in singing. The other town residents join in to sing along. When Daisy, Huey, Dewey and Louie arrive, Donald apologizes and everyone happily sings the song, eventually Donald, who gets used to it.

The fifth and final segment stars Mickey as he makes decorations for the Christmas party, which Pluto keeps interrupting. When Pluto attempts to help by putting the star on the tree, he inadvertently destroys all the decorations (especially knocking down the Christmas tree), causing a frustrated Mickey yells at his dog, and sends Pluto to his doghouse as a punishment. Feeling like he is rejected from his owner, Pluto decides to run away from home and then finds himself shipped to the North Pole, where Santa's reindeer adopt him. Back at home, Mickey redecorates the house and, ashamed of how he unleashed his anger at Pluto, attempts to reconcile with him, only to find him missing. Mickey posts several "lost dog" posters and eventually turns to a department store Santa, who turns out to be the real one. Meanwhile, Pluto becomes homesick to which Santa and the reindeer help Pluto return home. As Mickey's friends arrive, Pluto completes the Christmas tree decorations and everyone celebrates Pluto's return, even Donald and Daisy Duck, who had just showed up with Huey, Dewey and Louie, Uncle Scrooge, Max, Goofy and Minnie Mouse (who is also entranced by the decorations). The film concludes with a medley of various carols as the book closes.