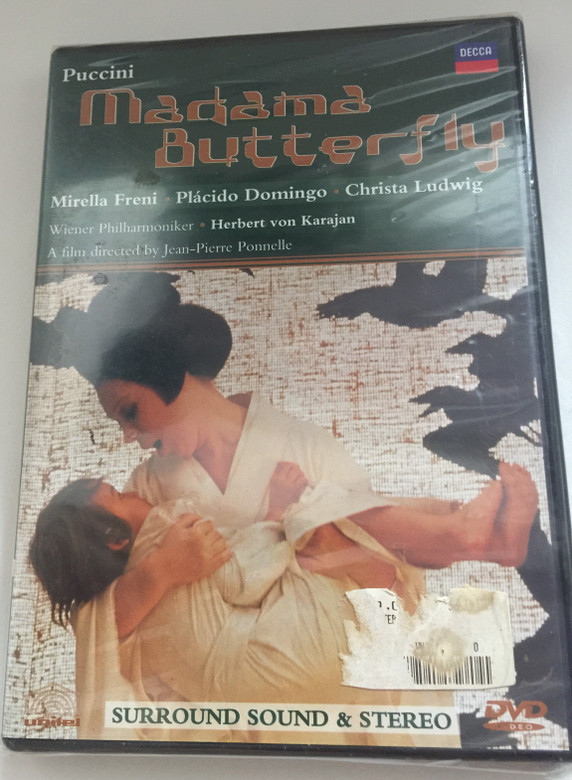 The Italian opera of love and disaster between an Oriental woman and the Westerner who takes advantage of her. Produced by J. P. Ponnelle and directed by Karajan. Featuring the music of the Vienna Philharmonic Orchestra and the vocal talents of Freni and Domingo

It is based on the short story "Madame Butterfly" (1898) by John Luther Long, which in turn was based on stories told to Long by his sister Jennie Correll and on the semi-autobiographical 1887 French novel Madame Chrysanthème by Pierre Loti. Long's version was dramatized by David Belasco as the one-act play Madame Butterfly: A Tragedy of Japan, which, after premiering in New York in 1900, moved to London, where Puccini saw it in the summer of that year.

The original version of the opera, in two acts, had its premiere on 17 February 1904 at La Scala in Milan. It was poorly received, despite having such notable singers as soprano Rosina Storchio, tenor Giovanni Zenatello and baritone Giuseppe De Luca in lead roles. This was due in part to a late completion by Puccini, which gave inadequate time for rehearsals. Puccini revised the opera, splitting the second act in two, with the Humming Chorus as a bridge to what became Act III, and making other changes. Success ensued, starting with the first performance on 28 May 1904 in Brescia.