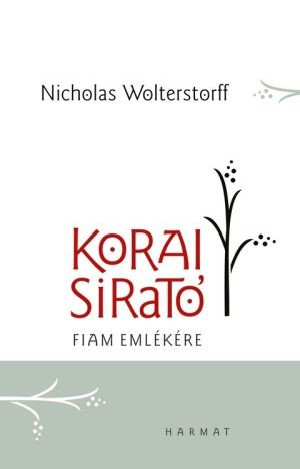 Korai sirató – Fiam emlékére by NICHOLAS WOLTERSTORFF - HUNGARIAN TRANSLATION OF Lament for a Son / The Author writes not as a scholar but as a loving father grieving the loss of his son.

Nicholas Wolterstorff (born January 21, 1932) is an American philosopher and a liturgical theologian. He is currently Noah Porter Professor Emeritus Philosophical Theology at Yale University. A prolific writer with wide-ranging philosophical and theological interests, he has written books on aesthetics, epistemology, political philosophy, philosophy of religion, metaphysics, and philosophy of education. In Faith and Rationality, Wolterstorff, Alvin Plantinga, and William Alston developed and expanded upon a view of religious epistemology that has come to be known as Reformed epistemology. He also helped to establish the journal Faith and Philosophy and the Society of Christian Philosophers.

Well-known Christian philosopher Nicholas Wolterstorff has authored many books that have contributed significantly to scholarship in several subjects. In Lament for a Son he writes not as a scholar but as a loving father grieving the loss of his son.
In brief vignettes Wolterstorff explores with a moving honesty and intensity, all the facets of his experience of this irreversible loss. Though he grieves "not as one who has no hope," he finds no comfort in the pious-sounding phrases that would diminish the malevolence of death.
The book is in one sense a narrative account of events--from the numbing telephone call on a sunny Sunday afternoon that tells of 25-year-old Eric's death in a mountain-climbing accident, to a graveside visit a year later. But the book is far more than narrative. Every event is an occasion for remembering, for meditating, for Job-like anguish in the struggle to accept and understand.
A profoundly faith-affirming book, Lament for a Son gives eloquent expression to a grief that is at once unique and universal--a grief for an individual, irreplaceable person. Though it is an intensely personal book, Wolterstorff decided to publish it, he says, "in the hope that it will be of help to some of those who find themselves with us in the company of mourners." 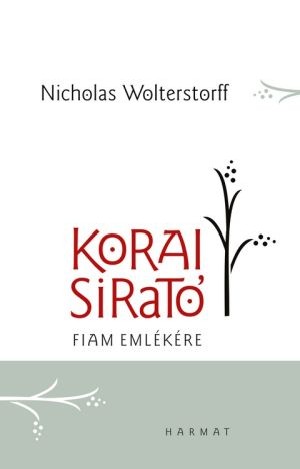