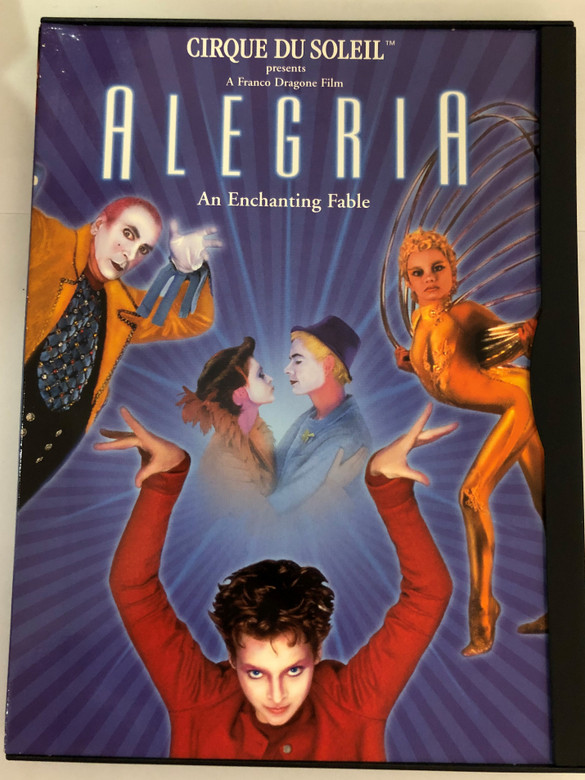 Alegría is a Cirque du Soleil touring production, created in 1994 by director Franco Dragone and director of creation Gilles Ste-Croix.

It was one of Cirque du Soleil's most popular touring shows. Since it premiered in April 1994, it has been performed over 5,000 times and seen by over 14 million spectators in more than 250 cities around the world. Alegría originated as a touring big top show. However, beginning with its 2009-2011 North American tour, the show was converted to an arena format, enabling it to visit cities that were previously inaccessible to the big top tour. Furthermore, Alegría took a short respite and was converted to a resident show at MGM's Beau Rivage casino from May 1999 to October 2000 before it continued touring again. On 29 December 2013, Alegría performed its final show at the Lotto Arena in Antwerp, Belgium.

Alegría, written by Rudy Barichello and directed by Franco Dragone.The cast included actors such as Frank Langella, Mako, Julie Cox, René Bazinet and a guest appearance from Whoopi Goldberg, as well as several performers and musicians from the touring production (many appeared in both this film and the DVD of the touring production). The film employs a conventionally structured narrative, in contrast to the abstract allegory of the live show. It tells the story of a boy named Momo who wants to save the children from their imprisonment in the dark factory of a cruel man named Marcello. Momo's only friend, a quirky clown named Frac, aids him, while also falling in love with a circus singer named Giulietta passing through town. The children turn against Marcello (who is also known as the Dragon) by throwing rocks at him. The pair soon find their destinies increasingly entwined with that of the circus.

The songs "Let Love Live", "Child in His Eyes", "Love Leaves Someone Behind" and "Mountain of Clothes" are sung by Irène Marc. The film also features Elena Lev manipulating hula hoops and Alexander Dobrynin performing on the bungee cords and the aerial cube.

Cirque du Soleil produced a separate DVD of the touring stage show Alegría. It was filmed in July 2001 in front of live audiences in Sydney, Australia. This production was directed and produced by Nick Morris. He used 14 cameras and special filming techniques to transport the viewer to the center of the performance.

The characters in Alegría comprise people of two separate generations: the New Order and the Old Order. 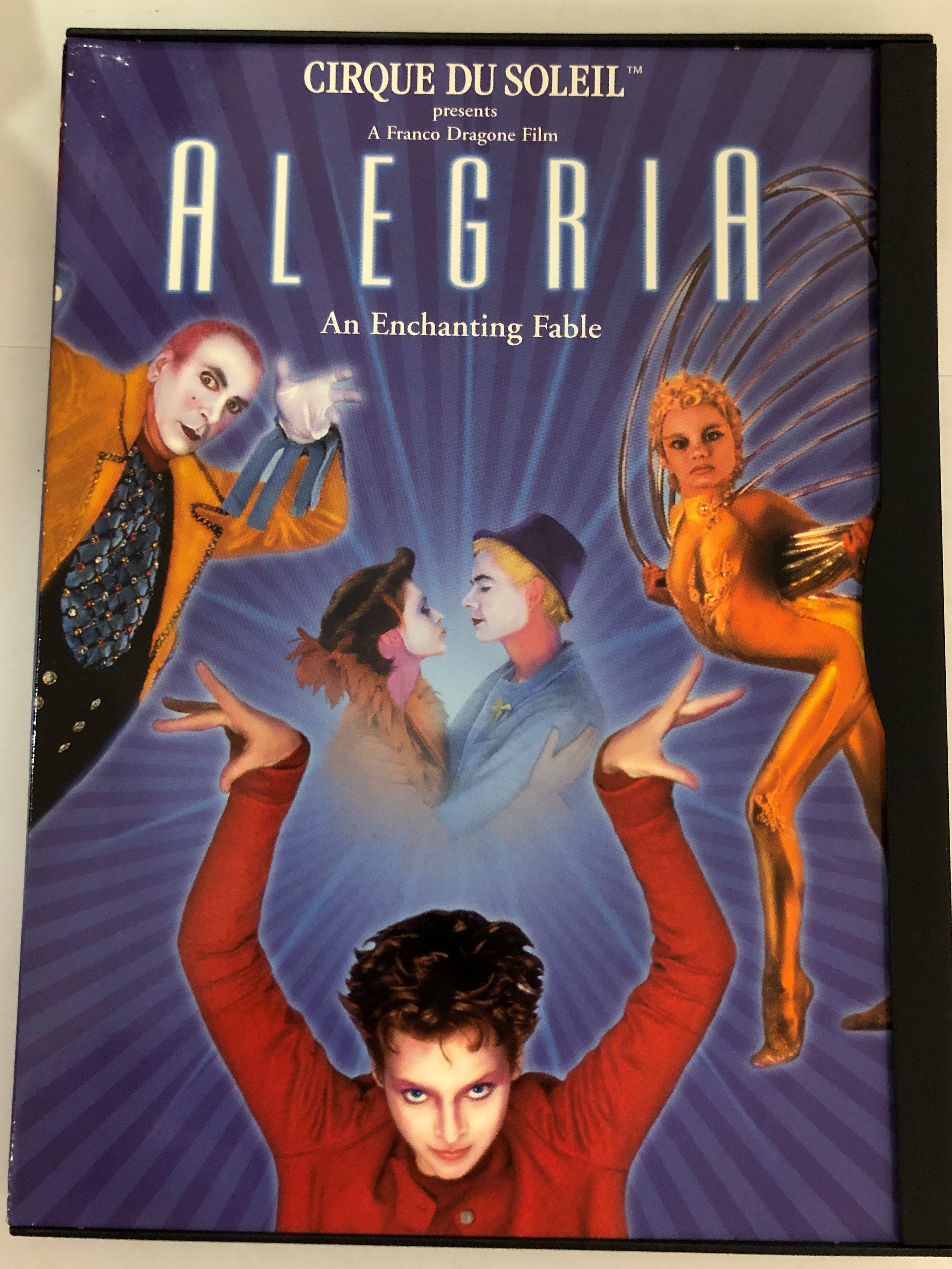 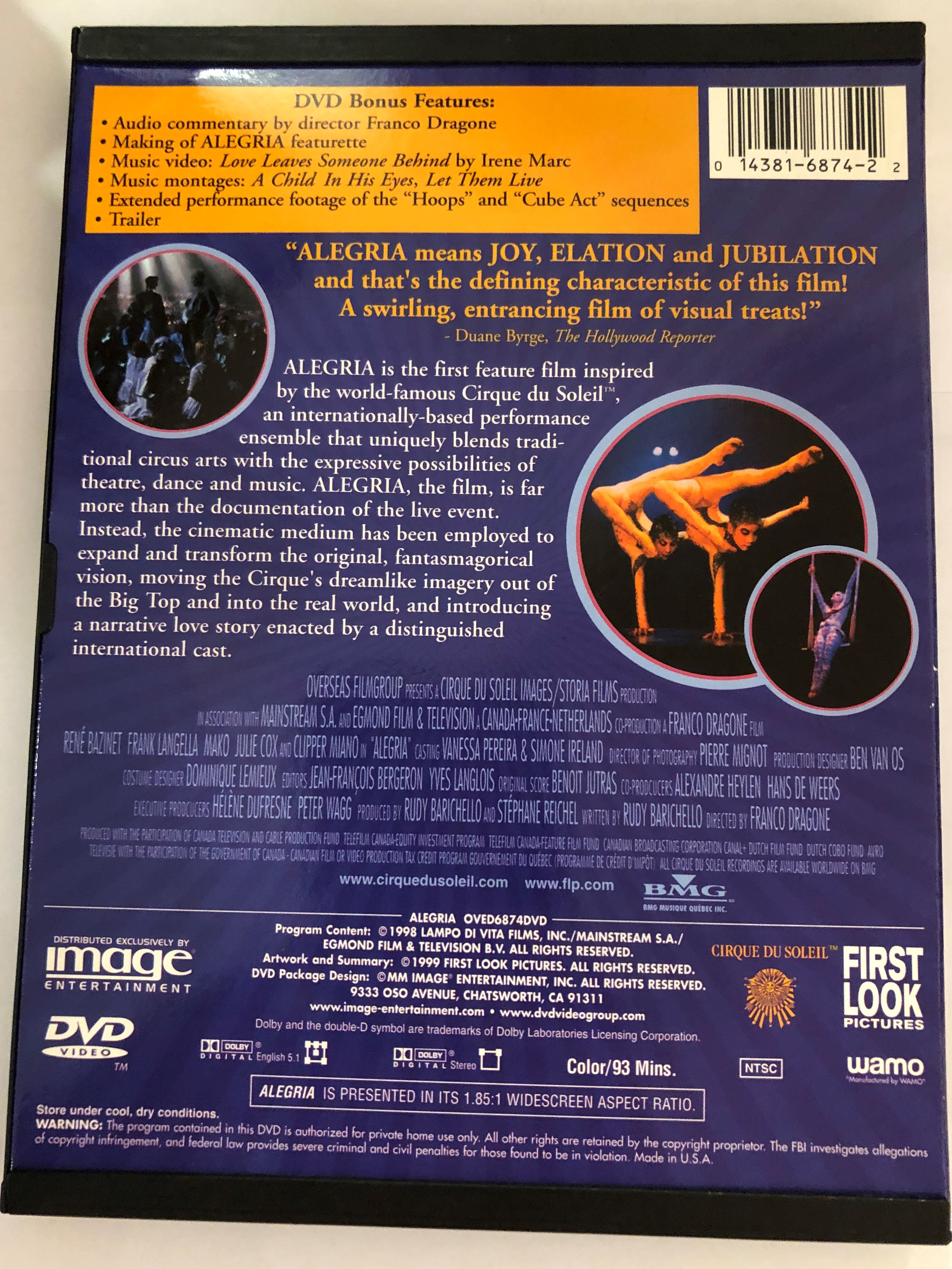