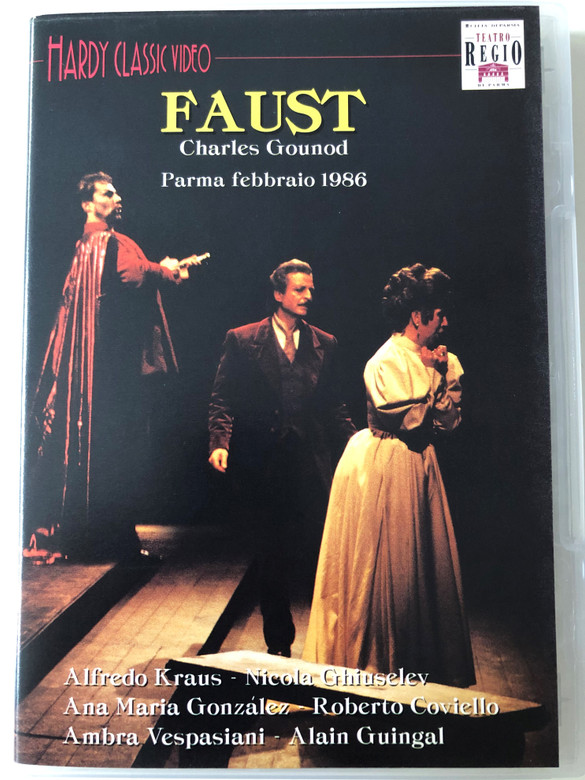 Charles-François Gounod - 17 June 1818 – 18 October 1893, usually known as Charles Gounod, was a French composer. He wrote twelve operas, of which the most popular has always been Faust (1859); his Roméo et Juliette (1867) also remains in the international repertory. He composed a large amount of church music, many songs, and popular short pieces including his Ave Maria (an elaboration of a Bach piece), and Funeral March of a Marionette.

Born in Paris into an artistic and musical family Gounod was a student at the Conservatoire de Paris and won France's most prestigious musical prize, the Prix de Rome. His studies took him to Italy, Austria and then Prussia, where he met Felix Mendelssohn, whose advocacy of the music of Bach was an early influence on him. He was deeply religious, and after his return to Paris, he briefly considered becoming a priest. He composed prolifically, writing church music, songs, orchestral music and operas.

Faust is an opera in five acts by Charles Gounod to a French libretto by Jules Barbier and Michel Carré from Carré's play Faust et Marguerite, in turn loosely based on Johann Wolfgang von Goethe's Faust, Part One. It debuted at the Théâtre Lyrique on the Boulevard du Temple in Paris on 19 March 1859, with influential sets designed by Charles-Antoine Cambon and Joseph Thierry, Jean Émile Daran, Édouard Desplechin, and Philippe Chaperon.

Faust, an aging scholar, determines that his studies have come to nothing and have only caused him to miss out on life and love (Rien! En vain j'interroge). He attempts to kill himself (twice) with poison but stops each time when he hears a choir. He curses hope and faith, and asks for infernal guidance. Méphistophélès appears (duet: Me voici) and, with a tempting image of Marguerite at her spinning wheel, persuades Faust to buy Méphistophélès's services on Earth in exchange for Faust's in Hell. Faust's goblet of poison is magically transformed into an elixir of youth, making the aged doctor a handsome young gentleman; the strange companions then set out into the world.

At the city gates

A chorus of students, soldiers and villagers sings a drinking song (Vin ou Bière). Valentin, leaving for war with his friend Wagner, entrusts the care of his sister Marguerite to his youthful friend Siébel (O sainte médaille ... Avant de quitter ces lieux). Méphistophélès appears, provides the crowd with wine, and sings a rousing, irreverent song about the Golden Calf (Le veau d'or). Méphistophélès maligns Marguerite, and Valentin tries to strike him with his sword, which shatters in the air. Valentin and friends use the cross-shaped hilts of their swords to fend off what they now know is an infernal power (chorus: De l'enfer). Méphistophélès is joined by Faust and the villagers in a waltz (Ainsi que la brise légère). Marguerite appears and Faust declares his admiration, but she refuses Faust's arm out of modesty, a quality that makes him love her even more.

The lovesick boy Siébel leaves a bouquet for Marguerite (Faites-lui mes aveux). Faust sends Méphistophélès in search of a gift for Marguerite and sings a cavatina (Salut, demeure chaste et pure) idealizing Marguerite as a pure child of nature. Méphistophélès brings in a decorated box containing exquisite jewelry and a hand mirror and leaves it on Marguerite's doorstep, next to Siébel's flowers. Marguerite enters, pondering her encounter with Faust at the city gates, and sings a melancholy ballad about the King of Thule (Il était un roi de Thulé). Marthe, Marguerite's neighbour, notices the jewellery and says it must be from an admirer. Marguerite tries on the jewels and is captivated by how they enhance her beauty, as she sings in the famous aria, the Jewel Song (Ah! je ris de me voir si belle en ce miroir). Méphistophélès and Faust join the women in the garden and romance them. Marguerite allows Faust to kiss her (Laisse-moi, laisse-moi contempler ton visage), but then asks him to go away. She sings at her window for his quick return, and Faust, listening, returns to her. Under the watchful eye and malevolent laughter of Méphistophélès, it is clear that Faust's seduction of Marguerite will be successful.

After being made pregnant and seemingly abandoned by Faust, Marguerite has given birth and is a social outcast. She sings an aria at her spinning wheel (Il ne revient pas). Siébel stands by her. The scene shifts to the square outside Marguerite's house. Valentin's company returns from the war to a military march (Déposons les armes and Gloire immortelle de nos aïeux, the well-known "soldiers' chorus"). Siébel asks Valentin to forgive Marguerite. Valentin rushes to her cottage. While he is inside Faust and Méphistophélès appear, and Méphistophélès, knowing that Marguerite is not in there alone, sings a mocking burlesque of a lover's serenade under Marguerite's window (Vous qui faites l'endormie). Valentin takes the bait and comes out of the cottage, now knowing that Faust has debauched his sister. The two men fight, but Faust is reluctant to hurt the brother of the woman he adores. Méphistophélès blocks Valentin's sword, allowing Faust to make the fatal thrust. With his dying breath Valentin blames Marguerite for his death and condemns her to Hell before the assembled townspeople (Ecoute-moi bien Marguerite). Marguerite goes to the church and tries to pray there but is stopped, first by the sadistic Méphistophélès and then by a choir of devils. She finishes her prayer but faints when she is cursed again by Méphistophélès.

Méphistophélès and Faust are surrounded by witches (Un, deux et trois). Faust is transported to a cave of queens and courtesans, and Méphistophélès promises to provide Faust with the love of the greatest and most beautiful women in history. An orgiastic ballet suggests the revelry that continues throughout the night. As dawn approaches, Faust sees a vision of Marguerite and calls for her. Méphistophélès helps Faust enter the prison where Marguerite is being held for killing her child. They sing a love duet (Oui, c'est toi que j'aime). Méphistophélès states that only a mortal hand can deliver Marguerite from her fate, and Faust offers to rescue her from the hangman, but she prefers to trust her fate to God and His angels (Anges purs, anges radieux). At the end she asks why Faust's hands are covered in blood, pushes him away, and falls down motionless. Méphistophélès curses, as a voice on high sings "Sauvée!" ("Saved!"). The bells of Easter sound and a chorus of angels sings "Christ est ressuscité!" ('"Christ is risen!"). The walls of the prison open, and Marguerite's soul rises to heaven. In despair Faust follows it with his eyes; he falls to his knees and prays. Méphistophélès is turned away by the shining sword of the archangel.