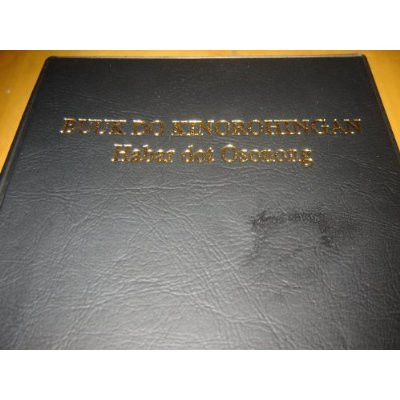 Buuk Do Kinorohingan - Habar dot Osonong / DUSUN (KADAZAN) Bible / Today's Dusun Version Revised Publication date: 2007 Dusun is the collective name of a tribe or ethnic and linguistic group in the Malaysian controlled state of Sabah of North Borneo. Due to similarities in culture and language with the Kadazan ethnic group, and also because of other political initiatives, a new unified term called "Kadazan-Dusun" was created. Collectively, they form the largest ethnic group in Sabah. A small minority of Dusuns can also be found in Brunei where they are defined by the constitution to be one of the seven Bumiputera groups. The ethnic group, makes up, at one time, 30% of Sabah population and are broken down into more than 30 sub-ethnic, or dialectical groups, or tribes each speaking a slightly different dialect of the Dusunic family language. They are mostly mutually understandable. Coincidentally, Dusun is the Malay word that means "orchard" and is derived from "Orang Dusun" or "men of the orchards" as their houses are surrounded with fruit trees.