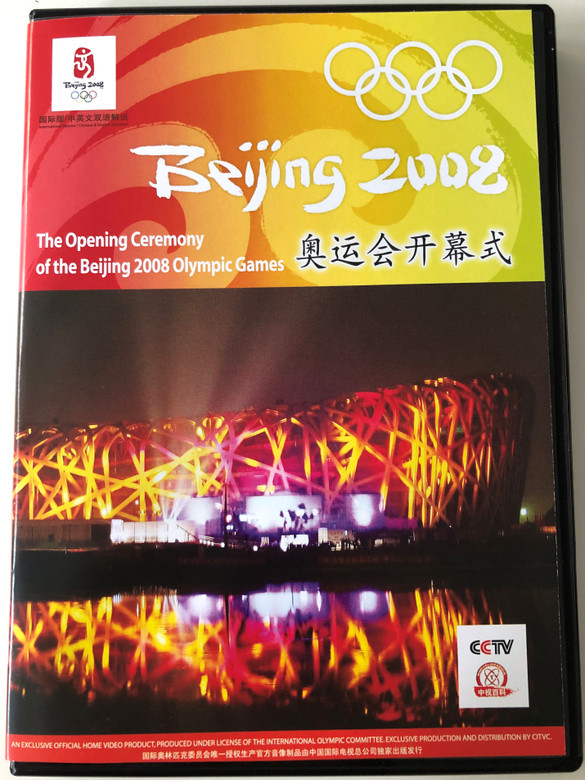 Now you can enjoy The Opening Ceremony of the Beijing 2008 Olympic Games as often as you like in this two-DVD set! This magnificent show, directed by world-famous director Zhang Yimou, includes more than 20,000 performers and demonstrates 5,000 years of Chinese history, culture, and modern advances. Your family and friends are sure to cherish this awe-inspiring keepsake. These are the official DVDs distributed by CCTV.

The 2008 Summer Olympics opening ceremony was held at the Beijing National Stadium, also known as the Bird's Nest. It began at 20:00 China Standard Time (UTC+08:00) on Friday, 8 August 2008, as the number 8 is considered to be auspicious. The number 8 is associated with prosperity and confidence in Chinese culture. The artistic part of the ceremony comprised two parts titled "Brilliant Civilization" and "Glorious Era" respectively. The first part highlighted the Chinese civilization and the second part exhibited modern China and its dream of harmony between the people of the world. The stadium was full to its 91,000 capacity according to organizers.

The ceremony was directed by Chinese filmmaker Zhang Yimou, who was the chief director and was assisted by Chinese choreographers Zhang Jigang and Chen Weiya. The director of music for the ceremony was composer Chen Qigang. It was noted for its focus on ancient Chinese culture, and for its creativity, as well as being the first to use weather modification technology to prevent rainfall.The final ascent to the torch featured Olympic gymnast Li Ning, who appeared to run through air around the membrane of the stadium. Featuring 15,000 performers, the ceremony lasted over four hours and was reported to have cost over US$100 million to produce.The opening ceremony was lauded by spectators and numerous international presses as spectacular and spellbinding, and by many accounts "the greatest ever in the history of Olympics". It drew rave reviews from media around the world, and was praised for its magnitude and ingenuity, attracting a huge worldwide TV audience. The opening ceremony can also be considered an important branding initiative for China.