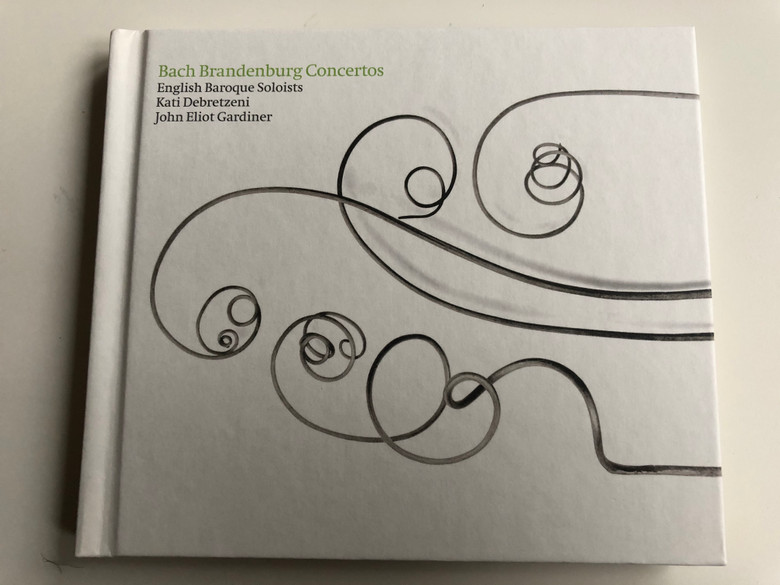 On this new release from SDG, John Eliot Gardiner and his superb period-instrument chamber orchestra, the English Baroque Soloists, offer their unique interpretation of Bach's Brandenburg Concertos. This is Gardiner's first recording of these works and it follows a phenomenal eleven-concert residency at the Spitalfieds Music Winter Festival in December 2008 and January 2009. These concertos, described by Bach as 'Concertos for several instruments', are widely regarded as among the finest musical compositions of the Baroque. Now considered a benchmark of Baroque music, the concertos still have the power to move people almost three centuries later.

"What more can a conductor do with Bach's Brandenburg Concertos these days? John Eliot Gardiner's answer is to do less: He actually conducts only Nos. 1 and 2, the most "orchestral" in fabric. The rest are led by English Baroque Soloists leader Kati Debretzeni - except for No. 6, since she is a violinist and that concerto contains no violins.

These Brandenburgs sound first and foremost like dance music - delivered with impeccable phrasing and a sure sense of style. They abound in joie de vivre and are filled with instrumental touches inspired by the musicians' creativity and understanding. In No. 1, for example, the horns are intrusive among the more "refined" instruments of their day - to the point of raucousness, especially in the first movement. This produces an unusually bright and bubbly performance of this most suite-like of the Brandenburgs. (read more after the jump)

What stands out in No. 2 is the outstanding balance within the odd instrumental combination that Bach created - violin, recorder, oboe and high trumpet. No. 3 is a tour de force for strings, with a finale that positively gallops without ever seeming rushed. In No. 4, the lilt of the two recorders has remarkable lightness and delicacy. No. 5 is handled with rare intelligence, not as a soloist-focused harpsichord concerto but as a chamber piece in which the harpsichord is first among equals for a time. And No. 6 is a marvel, its dark hues never eclipsing the dancelike rhythms of the music and the fascinating interplay among viola, cello, viola da gamba and violone.

There are many well-played Brandenburg sets available, but very few that show the music in a new light. This one does - it is an exceptional recording." -Mark J. Estren -- The Classical Beat - http://voices.washingtonpost.com/the-classical-beat/2010/06/on_cd_gardiner_leads_the_brand.html

Listeners who like their period performances of the music of J.S. Bach to be played as fast as possible will rejoice at John Eliot Gardiner's quicksilver set of the Brandenburg Concertos with the English Baroque Soloists, because his need for speed is fully indulged here. Gardiner's electrifying tempos almost push his musicians to their capacity for quickness and accuracy, and perhaps a bit too much for comfort. For listeners, it may take sitting through the entirety of the Brandenburg Concerto No. 1, and perhaps even part of the Brandenburg Concerto No. 2, to acclimatize to the briskness and to get used to the staccato accentuation. But if this kind of high-energy playing appeals -- and there are undoubtedly fans of this super-brisk style of performing Baroque music -- then the set will be appreciated for its other authentic features. Gardiner keeps his forces lean and the instrumentation appropriate to its era, and ornamentation and other liberties of interpretation are in keeping with the best scholarship. This is definitely a historically informed set of the Brandenburgs, which counterbalances any number of other ahistorical performances of the past, which presented these concertos with sluggish tempos, modern instruments, and large string and wind sections that were far from nimble. Gardiner's approach is challenging and bracing, so this set should certainly be heard by anyone who studies these popular works. Whether one can embrace them fully is another matter, but they are definitely ear-opening experiences. -- Allmusic, Blair Sanderson

Rare is the list of essential classical recordings which does not include the Brandenburgs. What makes this interpretation stand out is not just the actual playing but also some thoughtful commentaries by the conductor and soloists on the challenges Brandenburg players face.

From the start, this interpretation respects the instruments of Bach's times. The horns of Anneke Scott and David Bentley are literally hunting horns, although never the "disruptive influence" she claims they are. All instruments blend into an enjoyable performance of Concerto No 1.

The reviewer is a life-long lover of No 2, Bach's allegro movements bringing out the best of baroque ensembles in general and the baroque recorder in particular. Rachel Beckett demolishes the idea that the recorder is a teaching instrument for children.

So to No 3, best-known of the six. This recording is upbeat in the initial allegro, enhanced by a silvery quality to the strings which continues through the much-over-looked adagio to the second even more inspired allegro.

Catherine Latham joins Rachel Beckett on recorder in No 4, reinforcing the virtuoso skills demanded of the instrument. The recorder conveys the plaintive tones of the andante, perhaps more poignantly than would the flute, which only makes its (belated) appearance in a subdued No 5.

There is even an unsung heroine - viola-player Jane Rogers alone performs in all six concertos, saving her best for No 6. Her comments are worthy of the reflections published in this invigorating CD. -- The Whole Note, Michael Schwartz