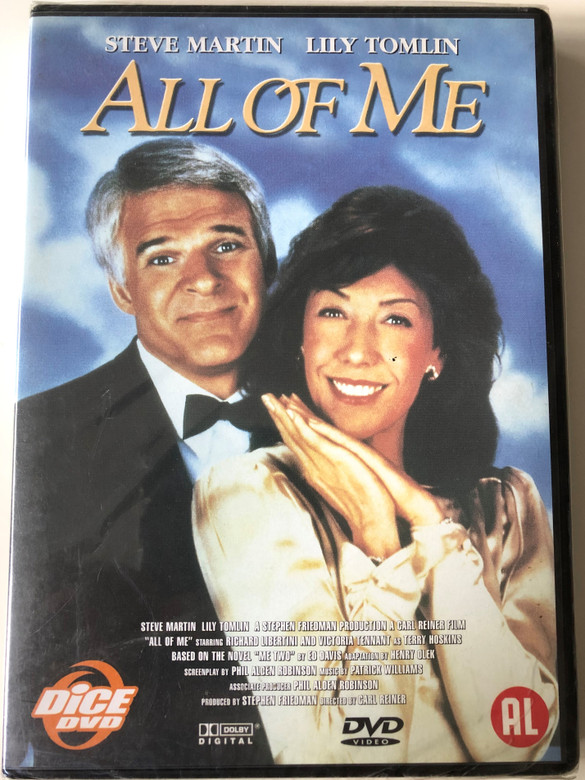 All of Me is a 1984 American fantasy comedy film directed by Carl Reiner and starring Steve Martin and Lily Tomlin. This film is based on the unpublished novel Me Two by Edwin Davis. The title song and theme of the movie is the 1931 song, "All of Me".

Dissatisfied 38-year-old attorney Roger Cobb (Martin) is dating his boss' daughter and is also an aspiring jazz guitarist. A difficult, eccentric millionairess named Edwina Cutwater (Tomlin) has been bedridden since childhood. Edwina, who has employed Roger's law firm to manage her estate, asks him to make some unusual final arrangements to her will.

Having discovered she is dying, Edwina has enlisted the aid of a culture-shocked mystic named Prahka Lasa (Richard Libertini), who has mastered the secret of transferring human souls. She has made an arrangement with Terry Hoskins (Victoria Tennant), a beautiful young woman. Edwina wants her own soul placed in Terry's vacated body so that she can finally experience youth and health. Roger is to change Edwina's will so that Terry, her future self, is her sole beneficiary. Unsurprisingly, Roger believes the whole plan is "bananas".

Edwina dies at the law office. The soul-transfer works, but the bowl temporarily holding her soul falls out the window and hits Roger. Roger ends up with Edwina's soul sharing his body. She has control over the right side of his body and he the left. She causes him to lose both his girlfriend and his job. Besides being able to hear her thoughts, Roger talks to Edwina's image that appears in mirrors and other reflective surfaces. Their relationship gradually warms up, but both of them want Edwina out of his body. Meanwhile, Terry is shocked to learn that the soul transference really works, as she only agreed to it to get Edwina's fortune. Terry tries to prevent Roger from finding the guru by sending him to the airport with a plane ticket, but when the holy man shows up again unexpectedly, she refuses to cooperate.