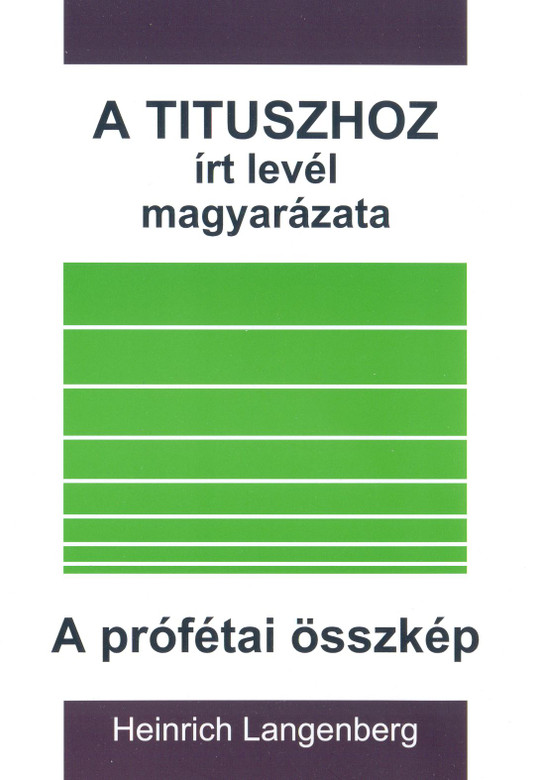 Heinrich Langenberg was born on 08.04.1876 in Bremen. After previous high school education he studied theology in Basel. After that he served several evang. Free church communities (Baptists) as preachers. It was only in his second half of life that he began to work as a writer and evangelist. A variety of writings were written during this time by him and published in part. He sought again and again the conversation with believers and sat down with word and writing for overcoming denominational boundaries. God gave him his spiritual freshness until old age. At the age of 97, he was working on the completion of his life's work. Heinrich Langenberg died after a short illness on 30.12.1972.

A thorough knowledge of the ancient Biblical languages ​​- Hebrew and Greek - which was of the utmost importance in his studies, allowed him to interpret the texts of the present texts. He came to the realization that every single book of Scripture has a special character and a special task. He was exceedingly happy to discover that there are no contradictions in the Bible, but that everything is done according to a wise plan, and that the Spirit of God is effective in every detail. Heinrich Langenberg saw his urgent task as laying out "Scripture through Scripture" in order to arouse a deeper understanding of the contents and contexts of Scripture and to clarify the purposes of God's salvation with Israel, the church and the nations.

His still current view of the situation of many Christians and the mission derived from them is particularly clear in the following quote: "We live in a time of inundation with Christian edifying literature and experience that we continue to diverge." It is an almost confusing Much and confusion of opinions, organizations, parties, and community building, so that the prospect of achieving a unity of faith and cognition is dwindling more and more, and it is not our intention to multiply this diversity, but on the contrary, out of itself to raise the increasing turbulence of human opinions to the original simplicity of the first Christians, who took up the Word not as a human word, but, as it is true, as the Word of God (1 Thessalonians 2:13) The Word itself must become alive, speak as a power of God, our task now is for the Lover of the Holy Scriptures To give guidance, in order to pave the way for independent research to the primordial sources of the Word. How can and should this be achieved? This way has been buried many times by insufficient translations from the basic text and infiltration of human opinions. When translating from the original biblical languages, consideration had to be given to the most accurate and literal reproduction and breakdown of basic biblical concepts and the continuity of the straight lines that run through the marvelous living organism of the Word of God, like nerve cords (2 Tim 2,15). , Above all, it is necessary to point out the great lineage of Christ, which runs through the whole of Holy Scripture from beginning to end. "

Commentary on the New Testament epistle, and an overview of the Old Testament prophecy in a volume.