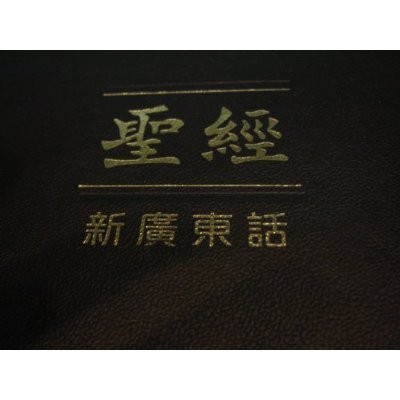 Leather Bound New Cantonese Bible - Black Leather NCB67 - It is elegant with black genuine leather and gold words on the cover. Publication date: 2006 Yue, commonly known as Cantonese, is a primary branch of Chinese spoken in southern China. The issue of whether Yue is a language in its own right or a dialect of a single Chinese language depends on conceptions of what a language is. Like the other branches of Chinese, Yue is considered a dialect for ethnic, political, and cultural reasons, but it is also considered a distinct language because of linguistic reasons. Spoken Cantonese is mutually unintelligible with other varieties of Chinese, though intelligible to a certain degree in its written form. The areas of China with the highest concentration of speakers are the provinces of Guangdong and (eastern) Guangxi and the regions of Hong Kong and Macau. There are also substantial Cantonese- and Taishanese-speaking minorities overseas in Southeast Asia, Canada, Australia, and the United States.