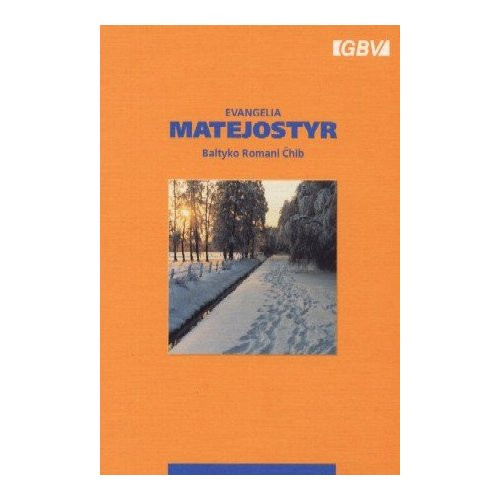 Gypsy (or Gipsy) The Gospel of Matthew in Baltic Romany Language, Lithuanian

Gypsy (or Gipsy) The Gospel of Matthew in Baltic Romany Language, Lithuanian Dialect

The Romani (also Romany, Romanies, Romanis, Roma or Gypsies; Romani: Rromane) are an ethnic group with origins in South Asia. The Romani are widely dispersed with their largest concentrated populations in Europe, but also in the Americas and, to a lesser extent, in Northern Africa and Asia. Romani or Romany, Gypsy or Gipsy (native name: rromani ?hib) is the language of the Romani people. It is an Indo-Aryan language, sometimes included in either the "Central" or the "Northwestern" group, sometimes treated as a branch of its own. Romani is a macrolanguage in the ISO 639 classification, taken to consist of seven sub-languages or major dialects. The largest dialect is Vlax Romani with close to 1.5 million speakers, followed by the Balkan, Carpathian and Sinte variants with a few hundred thousand speakers each. Analysis of the Romani language has shown that it is closely related to those spoken in central and northern India. This linguistic relationship is believed to indicate the geographical origins of the Romani people (Roma, Sinti, etc.). Loanwords in Romani make it possible to trace the pattern of their migration westwards. They came originally from the Indian subcontinent or what is now northern India and parts of Pakistan. The Romani language is usually[dubious - discuss] included in the Central Indo-Aryan languages (together with Western Hindi, Bhili, Gujarati, Khandeshi, Rajasthani etc.). It is still debated whether the origin of the name Sinti is the same as that of the toponym for the Sindh region of southeastern Pakistan and far western India (Rajasthan and Gujarat), around the lower Indus River or is a European loanword in Romani, recognizable as such in its morphological integration into the language (plural Sinte, feminine singular Sintica). It was primarily through comparative linguistic studies of the Romani language with various north Indian dialects and languages that the origins of the Roma people were traced back to India.