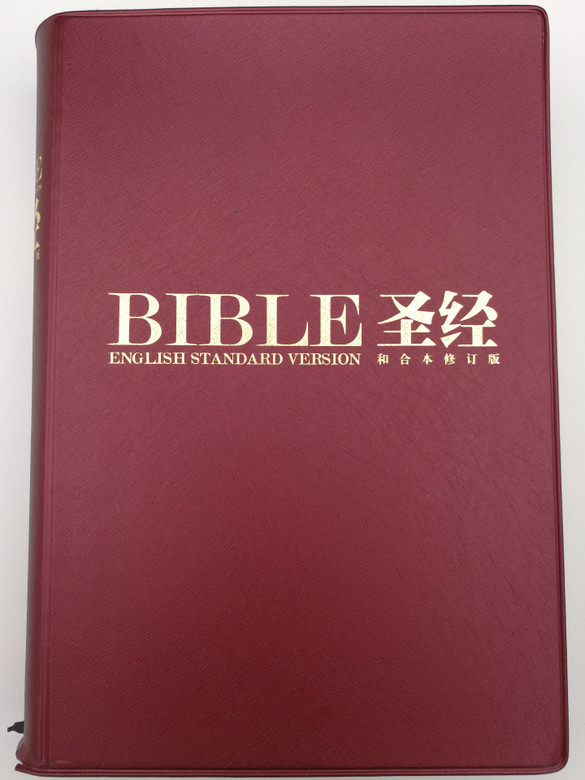 Dual language Bible in Revised Chinese Union Version - simplified script paired with English Standard Version. Suitable for Mandarin speakers from mainland China, Malaysia and Singapore. Scripture presented side by side on the page.This edition includes maps. Completed and launched in 2010 the RCUV is an update of of the 1919 Chinese Union Bible (CUV), providing numerous instances of modern, updated language while still retaining the biblical accuracy of the popular CUV.

The Chinese Union Version (CUV) has been considered by Chinese churches a beautifully crafted, classical Bible easy for memorization and it has been handed down through generations. Throughout the history of Chinese churches, many believers paid a high price in order to own and read this Bible. Today, many Chinese parents teach their children with their favourite scriptures. For these reasons, we remain faithful to the original style of the CUV by upholding the principles of “not to make amendments for the sake of changes” and “make minimal changes.”

Established in 1946, the United Bible Societies coordinates 146 bible societies to serve over 200 countries and regions with translation, publication, distribution and promotion of the Bible. Having assumed a non-denomination identity, the United Bible Societies guards the original scriptural texts by not adopting theologies of any denominations / religious groups / scholars. It encourages, however, the use of relevant cultural, historical, geographical information in certain biblical periods to enhance understanding of targeted readership, cultural background and keynote of the scriptures.

Over the years, the United Bible Societies has been committed to research of Biblical text and has developed software especially for Bible translation. This greatly enhances the accuracy and consistency of the Revised Chinese Union Version (RCUV). The New Testament of the RCUV makes reference to the Greek New Testament, 4th edition (1993), published by the United Bible Societies, and the Old Testament makes reference to the 5th edition (1997) of Biblia Hebraica Stuttgartensia.

From drafting, proofreading to editing, the entire process of revision on each book of the RCUV is handled by a team of accomplished scholars specializing in Bible study. This ensures the consistency in wording, grammar and revision principles. For example, Rev. Zhou Luen-hua and Dr I-Jin Loh were the revisors and chief editors of the original text of the New Testament. For the Old Testament, Dr Liang Wang-hui and Dr Daniel Lay revised the original texts while Rev. Zhou Luen-hua took the role of chief editor. Dr Joseph Hung was the translation consultant for the Old and New Testament.

To produce a Chinese Bible acceptable by Chinese readers in mainland China, Hong Kong, Taiwan, and other Chinese communities, as well as in churches of different denominations, revision was carried out with care. To avoid partiality, the revision team comprised scholars from mainland China, Hong Kong, Taiwan, Malaysia, the Philippines, Singapore, Australia, Europe and the Americas. Over the years, TSPM/CCC has commissioned Bible scholars to participate in the revision so that the RCUV could become more representative and take up the role of enhancing harmonious unity. The RCUV also minimizes the influences brought about by dialects and vernacular languages that may prevent proper understanding of the Bible by Chinese readers of various backgrounds.