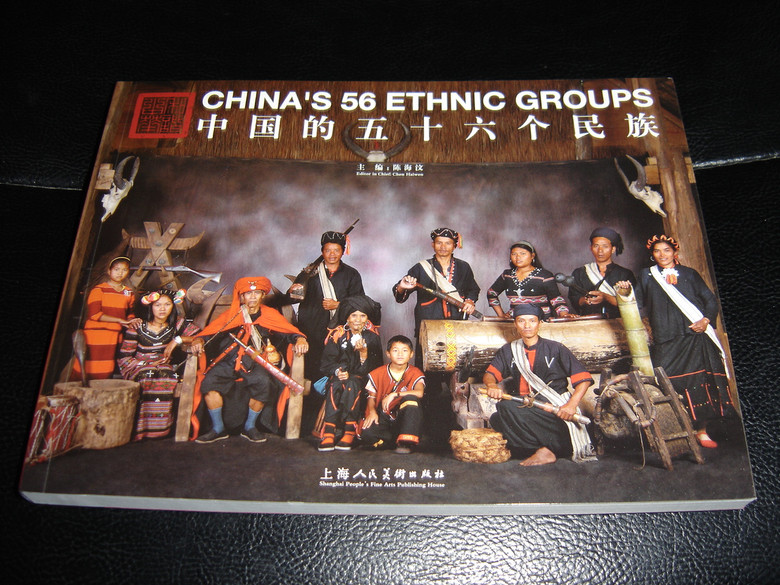 China's 56 Ethnic Groups / Chinese - English Bilingual / Harmonious China - Features of China's 56 Ethnic Groups / Chen Haiwen / This is the SMALL 120 page version Chen has led his crew of 14 Chinese photographers through some 190,000 km in roughly 554 counties and cities. They have taken 57,228 pictures of the 56 Chinese ethnic groups. His album Harmonious China: Glimpses of 56 Chinese Ethnic Groups is on display, along with 800 other photos, at Beijing's Wangfujing until Monday. Around 450 photos from the exhibition will be compiled into another album, to showcase the nation's unity and development. Chen says the idea for his album came from a book by Bai Yansong, a news anchor in China Central Television, who said that he had found several well-illustrated books on Chinese minorities in Japan, but none of the authors was Chinese. "Recording is a photographer's responsibility," says Chen. "I wanted to express my understanding of the Chinese nation as a huge family through my camera." Chen was born in 1958 in the poor areas of Shanghai. His meager earnings in a factory were not enough to support his interest in photography. He eventually set up a small company in the early 1990s to make company brochures. Today, his company specializes in photography, designing and printing. As vice-chairman of the Shanghai Photographers' Association, Chen has published a dozen albums on Shanghai's urban life and initiated many projects to record life-changing events in China