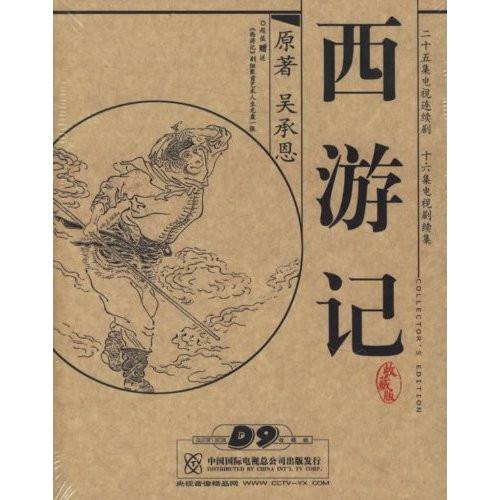 Based on one of China's most famous classical novels, this "live-action" CCTV production of Journey to the West is told through 25 adventure filled episodes of the Monkey King and his friends Pigsy and Sandy. Based on the true story of the monk Xuan Zang fairy tales, legents, superstitions, and popular beliefs are interwoven into the true account of the monk"s journey to create a novel that has endured down through China"s history. This DVD set is the perfect way to introduce your family to this ever popular story. In Mandarin and Cantonese only. You can choose either Mandrin or Cantonese on your DVD player. 25 Episodes in 13 DVDs, Mandarin and Cantonese. English & Chinese subtitles.

Journey to the West is a Chinese television series adapted from the classic novel of the same title. The series was first broadcast on CCTV in China on 1 October 1986. The series became an instant classic in China and is still being praised as the best and most authentic interpretation of the novel.  Unadapted portions of the original story were later covered in the second season, which was released in 1999.

Season 1 has 25 episodes and covers 74 chapters of the novel. The first trial episode was aired on 1 October 1986, and filming lasted until 1987. It was aired as a whole series in 1988. With the limited but relatively new special effects, the series received a viewership rate of 89.4% in 1987. The series has been rebroadcast every year since then. As of 2012, the series has been repeated on Chinese local channels more than 2,000 times.

Season 2 has 16 episodes (covers another 25 chapters of the novel). Filming began in 1998 and finished in 1999. It was broadcast on CCTV in 2000. The internal story of the second season has the four protagonists relating to Emperor Taizong of Tang via flashbacks of their travels and adventures, (namely those episodes not depicted in the first series) upon their return to China. Season 2 differs from the format of the first season, as most episodes end on a cliffhanger, with conflicts being resolved and new ones encountered in the middle of episodes in a more fluid timeline.