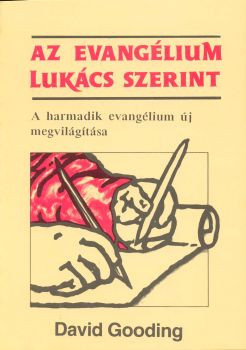 David Willoughby Gooding (born 1925) is Professor Emeritus of Old Testament Greek at Queen's University Belfast, and is a member of the Royal Irish Academy.

He is a highly regarded Bible teacher and his international teaching ministry is marked by fresh and careful expositions of both testaments. He has published scholarly studies on the Septuagint and Old Testament narratives, as well as expositions of Luke, John 13–17, Acts, Hebrews and the New Testament's use of the Old Testament. During the 1980s and 1990s he had a particular interest in the countries of the former Soviet Union and was involved in writing articles defending and promoting Christianity for use in those countries. He has also had a personal impact on a number of evangelical Christian leaders, notably John Lennox.

Right from the start of his gospel, Luke makes it clear that the story of Jesus is neither ancient myth nor contemporary fable. It is straightforward history. To emphasize this he provides us with historical coordinates. He informs us, for example, that when John began publicly to introduce Christ to his nation it was in the fifteenth year of the Emperor Tiberius' reign, while Pontius Pilate was governor of Judaea, during the high-priesthood of Annas and Caiaphas. This is, then, an historical account. But what does Luke's history of Jesus mean? And how can we be certain that we have understood the message that he has presented in his account of Christ's life? David Gooding asks us to begin by recalling that Luke is an ancient and not a modern historian. A modern historian might compile a list of the things that Jesus did and taught, and then add his own explanations. But Luke has more in common with ancient historians such as Thucydides and writers of Old Testament books such as Judges and 1 and 2 Samuel. With minimal comment, he has grouped the material about Christ in a way that leads thoughtful readers to discover for themselves the point and purpose of each incident. Luke is, then, both historian and artist. It has often been lamented that Christ's public ministry on earth was so short-lived, and his death at the hands of his enemies a tragedy. But Luke will not have it so. Following Christ's own statements, he divides his Gospel into two parts: the coming of Christ from glory into our world, and his going back to glory. David Gooding shows that by arranging the events of each part into discreet stages and movements, Luke is proclaiming that Christ was carrying out a definite mission-his going, by way of his cross, resurrection and ascension was as deliberate as his coming. With a profound understanding of both the Scriptures and the classical world that influenced Luke, this exposition leads us through the artistry of Luke's presentation. However familiar the terrain of this Gospel, we will find that having an experienced guide makes a difference. By bringing out the significance of the narrative as a whole, David Gooding's analysis will help us to arrive at a confident understanding of Luke's message and open up insightful lines of application at each step along the way.