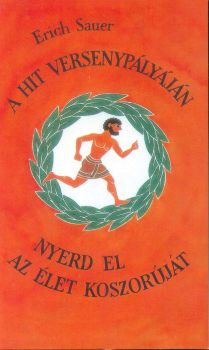 In many cases, the Word of God compares a believer's life to sporting competition or battle. The book will help you in your personal, internal, and practical experience in your personal struggle of faith.

Erich Sauer was born an raised by his mother as a child in the Christian Community of Berlin, a community of the so-called Open Brothers. There, the boy received strong spiritual impulses, which finally led in late 1911 to an inner approach to the Christian faith. Immediately after his conversion, he began to work in various branches of the free church community (Sunday School, Youth Community, City Mission). Inspired by a visit from the China missionary Ernst Kuhlmann, who impressed him greatly, he wanted to go to school as a teacher. To this end, he studied in Berlin at the Friedrich Wilhelm University first English, history, philosophy and theology with the aim of promotion. A severe eye disease that almost blinded him, forced him to complete his extensive studies.

The leader of the Alliance Bible School, Johannes Warns  who founded in 1919 on Hohenstaufenstraße in Berlin in 1919 and moved to Wiedenest in 1919, invited Sauer to relax in Oberbergische in 1920, which became the prelude to his later field of activity as a Bible school teacher for the young man. His lectures and sermons were honored and highly valued, and the collaboration with his colleagues Major Wedekind, Heinrich Koehler and Ferdinand Peterssen was a peaceful one.

In 1933 he married Lotte Köhler (1898-1984), the youngest daughter of the Bible school principal Christoph Köhler.

After the death of Johannes Warns in 1937 Erich Sauer took over the study administration of the Alliance Bible School. Together with his brother-in-law Heinz Köhler, he headed this institute until his death in 1952. After that, he took over the direction of the now "mission house Bibelschule Wiedenest e. V. "complete works until his death in 1959.

In addition, Sauer developed an extensive teaching and preaching activity in Germany and abroad. His lecture tours took him to many countries in Europe and North America. Study trips he made to Egypt, Israel, Syria, Turkey and Greece. In the many encounters with Christians of different denominations, he had an idea of ​​the greatness of the kingdom of God. The insight that the church of Jesus is always greater than its own denomination, but always smaller than the total number of those who are part of any church fellowship, was for Sauer an important pivot of his teachings. Therefore, he saw in the Evangelical Alliance an important field of activity and was here for many years an important leader.

In many cases, the Word of God compares a belever's life to sporting competition or battle. The book will help you in your personal, internal, and practical experience.

"What we need is a renewed vision of the person of the Redeemer, a vision of the cross and a practical obedience to the ways of the cross, a thankful recognition of God's grace abundantly bestowing its blessings upon us. We must be taken hold of and be flooded through and through by the power of the Holy Spirit … this implies in detail that we must stand the test in difficulties, in sorrows, we must be able to dismiss the spirit of worrying and overcome all spiritual weariness and symptoms of fatigue, we must be ready to bear witness and must have a missionary spirit. Brotherly love and sanctification, prayerfulness and hearkening to the Word of God, must characterize us. All this will enable us to run steadfastly towards heaven and glory."