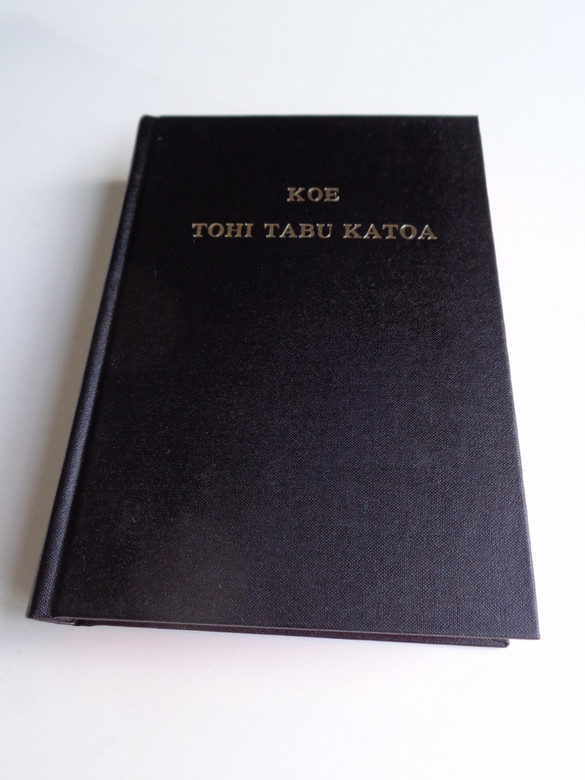 Tongan Bible West Old Version / Koe Tohi Tabu Katoa / Reprinted from 1884 Edition / Black Hardback 53W / Printed in Korea / 7.5 X 5.5 X 1 inches / The Bible Society of the South Pacific / 9789822172317 / Koe Tohi Tabu Katoa Aia Oku I Ai Ae Tohi Tabu Motua, Bea Moe Tohi Oe Fuakava Foou / Koe Hiki Ki He Lea Fakatoga E He Kau Faifekau / New Zealand Bible Society /// Tongan (lea fakatonga) is an Austronesian language of the Polynesian branch spoken in Tonga. It has around 200,000 speakers and is a national language of Tonga. / Tongan is one of the muiltiple languages in the Polynesian branch of the Austronesian languages, along with Hawaiian, Maori, Samoan and Tahitian, for example. Together with Niuean, it forms the Tongic subgroup of Polynesian. Tongan is unusual among Polynesian languages in that it has a so-called definitive accent. As with all Polynesian languages, Tongan has adapted the phonological system of proto-Polynesian. / The Kingdom of Tonga, is a Polynesian sovereign state and archipelago comprising 177 islands with a total surface area of about 750 square kilometres (290 sq mi) scattered over 700,000 square kilometres (270,000 sq mi) of the southern Pacific Ocean, of which 52 islands are inhabited by its 103,000 people.[4] Seventy percent of Tongans reside on the main island of Tongatapu.